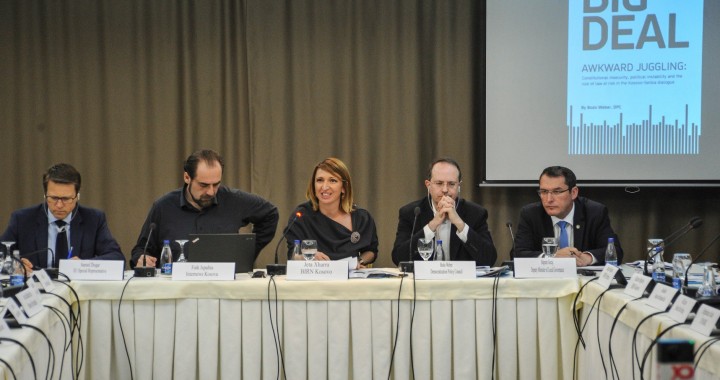 On the third anniversary of the first agreement between Kosovo and Serbia in Brussels, Big Deal published a report on the constitutional insecurity and political instability in Kosovo. Joanna Hanson reacts to the report’s findings.

The EU is indifferent to the legal aspects and implications of the dialogue. This is what Bodo Weber, the author of a recent report published by Big Deal, dealing with the issues of constitutional insecurity, political instability and the rule of law in the Kosovo-Serbia dialogue, has written. It is an unequivocal criticism of the European Union, leaving the sins of others in the shadows.

On Tuesday  April 19, the third anniversary of the signing of the first Brussels agreement on normalisation, Big Deal held a round table on the subject of a new publication entitled, “Awkward Juggling: Constitutional insecurity, political instability and the rule of law at risk in the Kosovo-Serbia dialogue.”

“Awkward Juggling…” analyses the Kosovo Constitutional Court’s ruling of December last year on the 25 August 2015 agreement related to the ASM initialled in Brussels by the Serbian and Albanian prime ministers (the agreement was formally called: “Association/Community of Serb-majority municipalities in Kosovo – general principles/main elements.”)

The report’s author Bodo Weber of the Berlin-based Democratization Policy Council admitted that the Constitutional Court judgement was a confusing and difficult read. He says this was partly the result of the judges having come under political pressure from both Kosovo’s ruling elites and the international community. He describes the judges, who should be totally impartial, as sitting on the fence, straddling these two pressure centres, a “constitutional law-politics nexus.” Hence the word juggling in the title. It is the international community, however, which seems to have come in for the main criticism.

It is the EU twinned with the USA which this report sees as bearing the greatest responsibility for this messy court decision. It is they whom the author’s recommendations are directed at. I would agree with the report’s criticisms of the EU, in particular its remark that it still remains unclear what the European External Action Service’s (EEAS) approach is towards this ruling and how it intends (if it does) to handle it. As has been stated before, to date  the EU has only managed to make a rather mealy-mouthed statement. The EU Office in Kosovo on Christmas Eve merely stated that it had taken note of the decision of the Constitutional Court and it expected all parties to respect it.

The EU is facilitating the dialogue and is allowing agreements to be made that not only contravene the constitution of both signatories but also contravene its own laws and European conventions. No one mentioned the European Convention of Human rights at this Big Deal discussion. Why not? If the EEAS had observed these it would not have gone so far down this non-constitutional-spirit path although the Convention does not deal with such issues as “full overview,” another point in the Court’s ruling.

Weber makes seven recommendations, each one opening with either both the abbreviations the EU and the US, or just the EEAS. These include demanding their full commitment to respect the constitutional and legal foundations of the state of Kosovo in the framework of the dialogue; to find support for a constitutional amendment regarding international agreements; to find a way to develop a dialogue with all political forces regarding the Association of Serb-majority Municipalities (ASM); the EEAS needs to engage international constitutional law experts; the need to send clear signals that the implementation of the rest of the agreement is just as important as the ASM. There are no recommendations for either the Serbian or Kosovo side.

Weber has concluded that the Brussels bureaucracy has often demonstrated that its efforts to sustain a political process designed to lead to a certain end can as a result degenerate into a dynamic in which the very process turns into an end in itself; a kind of self-fulfilling prophesy.

Some of these recommendations betray a seeming ignorance of what the international community has been doing especially in a bilateral capacity in trying to produce a more speedy and constructive implementation of the dialogue. Suggesting a constitutional amendment would be akin to opening up Pandora’s box in the National Assembly. It is difficult to believe the EEAS has not used legal experts although some of the legal failings in these agreements could have been recognised by school students. The Ahtisaari Proposals and the Macedonia Ohrid Framework Agreement provide suitable wording for these agreements. As we have said before, there is also the Council of Europe Venice Commission which was also not once mentioned round the table at this midday debate.

Let us remind ourselves, it is Serbia and Kosovo which have signed these agreements. The European Union Special Representative at the debate said that the EEAS listens to both sides and then draws up the draft agreements and those drafts are then worked on. That was the first time, I think, he had been so explicit but what we don’t know is how hard, if at all, the EEAS tried to persuade, to facilitate, the removal of ethnic and ambiguous, e.g. “full overview,” language in the text. The EEAS should be formulating those views into acceptable legal language. The internationals managed to persuade the Macedonian parties in 2001 to do this, e.g. Article 3.3 which says: “In order to ensure that police are aware of and responsive to the needs and interests of the local population, local heads of police will be selected by municipal councils from lists of candidates proposed by the Ministry of Interior, and will communicate regularly with the councils.”

It is, as I have said, the EU and US whom the report’s recommendations are directed at. It is they who need to: demonstrate full commitment to and respect for the constitutional and legal foundations of the Kosovo state in the framework of the Kosovo-Serbia dialogue; they should initiate methods to bring the government and opposition in Kosovo to pass a relevant constitutional amendment demanding that all international agreements are reviewed by the Constitutional Court prior to adoption; they need to send a strong signal that they support the work of the Constitutional Court and fully respect its independence; need to find means of a dialogue with all political forces in Kosovo to discuss the core reservations towards the ASM.

Weber is absolutely right when he underlines the importance of the independence of the Constitutional Court and not allowing its work to become politically influenced. The so-called international community has often stressed this, in particular at a bilateral level, and put in resources to develop the court as a respected independent institution. It is local political elites and the Kosovo government which really need to understand the importance of keeping this institution independent and ensuring that its offices are used according to its regulations.

The EU, the EEAS as the third party in the dialogue process, the party which offered its services to facilitate that dialogue, should have been more forthright in its response to the Constitutional Court’s ruling and should publicly inform both the citizens of Kosovo and its Member State citizens why it allowed a text to be agreed which was both out of line with domestic law as well as international and European law. The EUSR explained at the debate that the EU was a facilitator of the process which they did not force and nor did they have decision making powers.

Both Kosovo and Serbia aspire to EU membership and one of the key criteria for membership is respect for the rule of law and yet the EU has shown itself to have fallen short on that fundamental European principal. Weber described this as the EU process of constructive ambiguity having hit the wall but the use of ethnic formulations is not constructive ambiguity, quite the opposite. I would agree, however, that the concept of “full overview”  is both ambiguous and weak. The EU has the power to ensure the law is respected and cannot be restated ambiguously.

And what are the governments of Kosovo and Serbia supposed to do?  They must have been laughing all the way to the bank when they read this report. They were not given any recommendations. The dialogue process is aimed at improving bilateral relations between those two countries, at improving the lives of people in them and opening up the European path. The second point was hardly mentioned at the debate. The third point was cited by the Kosovo Deputy Minister present as being the reason why his government was in the dialogue. Nothing about the people or the integration of Kosovo’s diverse citizens.

Belgrade and Pristina know perfectly well they have overstepped the constitution and conventions; they have their legal advisers, they know there were formulations in the agreements which were not in line with domestic and international law. Anyone who has completed primary school can see that.  It is they who should be playing the key role in rectifying these mistakes and should be more open with their public about why they do not respond to public criticism about these aspects of the agreement, criticism which goes right back to April 2013.

There has to be commitment and ownership on all sides of the dialogue. This is not just a slippery slope to EU integration but is about improving people’s lives. This is one reason why Weber said all agreements should be implemented and are just as important as the one on the ASM. This is a message for Belgrade and Pristina as are all the recommendations in the report. It is a shame this has not been said more succinctly.

This text first appeared on the New Perspektiva website.