A year after thousands of Kosovars crossed into Hungary on their way to seek haven in the EU, returned migrants struggle to make ends meet back in their homeland, as Kosovo fails them once again.

Amid the numbing frost of the the pitch-black winter nights of late 2014 and early 2015, women, children and men were fiercely jostling one another  a bus ticket costing 15-20 euro that would guarantee them safe passage through Serbia and take them to the border with Hungary – the gate to the EU.

Many of them would reach their goal successfully, only to be deported months later.  The EU considers Kosovo a safe country which means that its citizens are not qualified for asylum. The unfortunate ones would be captured by Hungarian authorities and kept in camps under dreadful conditions.

Barely eight years after declaring independence, Kosovo continues dealing with a high rate of unemployment, corruption and poor law enforcement. The general unemployment rate is 35.3% and it reaches 60% for youth. In the last couple of years, thousands of citizens have abandoned the young country in search of better opportunities in other nations. While in 2013, 20 thousand Kosovars applied for asylum, this figure doubled in 2014 and eventually reached a record high in 2015 with 72,695 Kosovars seeking asylum in EU countries and  Switzerland.

In early 2015, Kosovo had the third highest number of asylum seekers in Europe, surpassed only by the war-torn countries Syria and Afghanistan.

Around 17 thousand migrants have been deported in 2015, the majority of whom from Germany and others from Switzerland, Sweden and Austria. In most cases, these migrants did not speak the local language and did not  plan long-term stays. A year after the latest “wave” of immigration from Kosovo, BIRN/Kallxo has met the migrants who were sent back. Economic hardship, debt and lack of access to quality education for their children are some of the mutual incentives behind the exodus.

A wedding ring in exchange for German camps

26-year-old Mirsade Osmani has always dreamed of place where she could live with dignity, have a job and have proper housing. Currently, the 12 members of the Osmani family share 35 square meters in a ramshackle building at the entrance of Gracanica.

Their few possessions and scant groceries lie side by side in a small room that Mirsade uses for sleeping and cooking.

In late 2014, after selling all of their few belongings, Mirsade, along with her husband and two year old son, left for Germany.

She  has also recently given birth to another girl. Rrahman, her husband, does not have a stable job and works as a laborer earning 5 euros a day.

When she, her son and her husband departed for Germany, they were forced to sell the cultivator that Rrahman used for work. Mirsade, besides selling all her jewelry, also sold her wedding ring to get a total of one thousand euros.

“We sold everything… we packed some clothes with us and left,” she explains. “There’s nothing here, no work, no help, nothing.”

“There’s nothing here, no work, no help, nothing.” Mirsade Osmani.

Mirsade and her family belong to the Ashkali community. The deplorable living conditions and lack of sufficient income caused them to migrate.

“Nobody wants to abandon their house and wander through unfamiliar roads, but we thought it would be somewhat better than here; we wanted to, at least, not worry about food and have a job,” Osmani said.

A warm shelter during the winter and sufficient food for her son was all that Mirsade needed.

The road to Germany was very difficult. Their son developed bronchitis due to the freezing cold. They spent a whole year in Germany, initially sleeping in camps, in sheds and later in apartments.

“It was good while we were there. We were granted welfare allowances, my son got enough food and it was warm,” she said, looking around her room in Kosovo which is heated only by a wood stove. 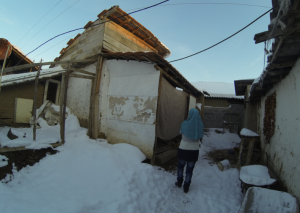 Mirsade Osmani in front of her house.

Most of the money they had received from the allowances was redirected to the rest of their family in Graçanica to build a house; they had already laid the foundation and purchased the building materials for the walls. Mirsade had become pregnant during that time.

At three in the morning, without prior warning, the police knocked on their door and told them that they had to leave the apartment in 10 minutes and go back to Kosovo.

“We were hoping that they wouldn’t force us to return to Kosovo while I was pregnant,” she says, “now I don’t know what to do with two little children, I don’t know how we’ll come through.”

During the first half of 2015, 56% of the registered deported migrants were granted emergency aid when they arrived in Kosovo, whereas only 9% benefited from stable reintegration programs.

Valon Krasniqi, the director of the Department for Statehood, Asylum and Migration at the Ministry of Internal Affairs, explains that the Ministry has a plan for reintegrating the repatriated. However, this plan only applies to  citizens who left the country before 2010.

“We cannot support them [the people who returned] because it implies that we’re legitimizing the fact that they left illegally,” says Krasniqi

In 2015, Kosovo failed to join the group of nations that are allowed visa-free entrance in the Schengen Zone, rendering it the only country in the Balkans whose citizens are required visas.

While the EU called the large number of illegal Kosovar asylum seekers a barrier towards liberalization, the Kosovar government called the refusal a “political decision by the EU leadership.”

According to the same requirements by the European Union, the Kosovar government should offer its returned citizens help in gaining employment, starting businesses, professional training as well as language courses for the repatriated children.

Shemsi Çitaku in front of his house. Photo: Atdhe Mulla.

The gates of the EU closed for everyone

In a semi-mountainous village, Shemsi Çitaku had closed off the house he inherited from his father with compressed blocks of soil. The forty year old from Bajqinë, a village near Podujevë, left for Germany together with his wife, daughter and two sons. They returned three months later.

Shemsi had hoped that his daughter Fjolla — who is affected by Down’s syndrome — would get proper schooling and even-handed treatment.

The Down syndrome community in Kosovo is very marginalized, meanwhile children affected by it attend regular schools. Among other things, people affected by this syndrome are still referred to as “mongoloids” in textbooks.

According to the Ministry of Education, there are about three thousand children with special needs who pursue schooling. Shemsi and his daughter Fjolla at their house. Photo: Atdhe Mulla.

“This girl is the main reason I left,” says Çitaku, adding that he made the decision for the general well-being of his family. According to him, the low salaries make individual progress impossible.

Before they left, they sold all of their livestock and, after returning, found their old house to be completely empty. Before leaving, Çitaku had started building his house, aided only by loans and friends. The house is finished but uninhabitable.

When in Germany, the Çitaku family spent their days and nights in numerous camps while waiting for their asylum applications to be approved.

He became disillusioned the moment he arrived in Germany. He discovered that all the hearsay about immediately getting a job and apartment had only been “propaganda.” It was impossible for him to get a job without a residence permit.

“Now, even if they tell me I can go by car and that there’s an 80 or 90% chance of them accepting me, I will not go,” he says with resolution.

The desperate farmer and the frail hope of Schengen

“When we decided to leave for Germany, I set my house up for sale and put up a sign. When we got back, I removed the sign and now I’m putting it back up again.

He hopes that by selling his house (located only a couple of hundred miles away from the old Fortress of Vushtrri) he will be able to pay off his multiple bank loans, leave Kosovo, settle somewhere in the countryside and work as a farmer.

“I have yet to pay off around 18,000 euros of credit,” he said, pondering about how he’ll manage to do it. “I guess only hope keeps people going,” he says, full of affliction.

According to the BQK, 40% of all Kosovar borrowers have difficulties paying off their debts due to high interest rates. Most affected are families, 44.7% of which spend more than 50% of their monthly income paying off their loans.

Until the 90s, Tërnava says, his life was “like a dream.”

“I had a job and used my income to ensure my family’s well-being; we would even go to the beach in Ulqin, Budva and in other cities of ex-Yugoslavia during the summer,” he explains, despite of the fact that he was a farmer at the time. “Comparing those times with now is impossible, it’s very different.

In 2008, Jeton was dismissed from his job at the Kosovo Energy Corporation where he led a group of technical repairmen. This department at KEK does not function to this day. His monthly salary of 315 euros used to ensure the survival of his seven-member family.

When he lost his job he was forced to take a bank loan. “I didn’t want anybody’s pity and I didn’t want to sink into poverty,” he says.  He bought 5 cows with the loan money but was immediately fined because the municipality does not allow housing livestock in urban areas.

Borrowing once again from the bank, Jeton invested in a parcel of agricultural land in the suburbs of Vushtrri and purchased sheep.

For the children and youth, it seems, there’s nothing here anymore. Let them get out there, work and live a good, normal life. Jeton Tërnava

“Multiple diseases started plaguing our sheep and we failed for two years in a row,” he says, adding that, because of the continuous failures, his children started getting desperate and he began to seek a solution outside of Kosovo.

“They begged me… they said we’ll be left behind and have no future,” explains Jeton, who had hoped that they would be able to stay in Germany long enough to pay off their loans. However, they only ended up staying for five and a half months.

When they got the news that they had to return to Kosovo, the children were disappointed the most.

“We returned, hopeful that they’d help us and find us a job, but there was nothing,” he said.

Jeton’s son works as a waiter at a local cafe in Vushtrri earning 5 euros a day. Two of his other sons go to school, but have little hope that they will be able to attend university in Prishtina due to the high cost of doing so.

Jeton says that if they would liberalize the visas, he would send his sons to their relatives outside of Kosovo and would himself leave and seek employment.

According to a report by the UNDP, Kosovo’s diaspora consists of more than 874,000 people, and 13,000 Kosovars migrate to different countries each year for employment, education and settlement.

Although it is not clear when Kosovo will get its recommendation for visa liberalization due to unfulfilled criteria, the Ministry of European Integration (MIE) hopes that it will happen in March.

According to Blerta Aliu, media adviser at the MIE, the ministry is preparing an awareness campaign to inform citizens about their rights and obligations in case liberalization occurs.

“If someone violates or abuses the visa liberalization, the consequences for them would include: a fine, an addition to their criminal record, and a ban from entering the Schengen Zone in the future,” she explains.

Completely pessimistic, Jeton says, “I won’t be living more than I already have, but for the children and youth, it seems, there’s nothing here anymore. Let them get out there, work and live a good, normal life.”