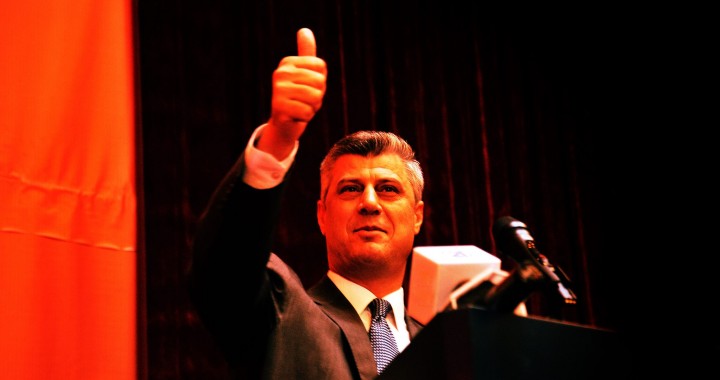 Amid raging street battles between protesters and police, Hashim Thaci was elected President of the Republic of Kosovo on Friday evening after three rounds of voting. Thaci, a former prime minister, will serve as Kosovo’s fifth president since the country’s independence in 2008. His mandate is five years.

The election, which had to be held before the first week of March, was hotly contested by three opposition parties who want the government to resign. The three opposition parties Nisma, Levizja Vetevendosje! and Alliance for the Future of Kosovo (AAK) have been setting off tear gas in parliament protesting the government since October. On Tuesday night, they set up an encampment to protest Thaci’s election in front of the Government building in Prishtina for the three days before the vote.

For the past six months, the opposition parties have been sabotaging all of the parliamentary sessions with water, whistles and tear gas.

Friday was the tenth time tear gas was thrown in the assembly chamber after all MPs had the chance to debate the candidacy of Hashim Thaci, and fellow party member Rafet Rama. Thaci was accused of having falsified his biography, having ‘sold-out’ Kosovo in the EU-brokered dialogue with Serbia and of giving away land in the demarcation agreement with Montenegro. The opposition leaders accused Thaci of trying to consolidate power and of becoming autocratic.

“It is clear that if Thaci becomes president he will amend the Constitution to make it a presidential republic like other autocrats have done,” Kurti said on the Assembly floor, comparing the future president to Hungary’s Viktor Orban, Turkey’s Erdogan, and Russia’s Putin.

All day long thousands of protesters massed in Kosovo’s central square and surrounded the Assembly as the session was going to start.

Thaci, who was the favorite from the getgo, was elected after three rounds of voting.  In the first round Thaci collected only 49 votes; as voting got underway the voices of the protesters were audible in the chamber as was their violent ejection from the square by teargas and water cannons.

In the second round, Thaci won 64 votes, finally ensuring a win in the third round with 71 votes. After his victory, Thaci addressed the Kosovo Parliament. He thanked the ambassadors who had stayed in the chambers throughout the day, although tear gas was released twice by opposition MPs.

The news of Thaci’s victory was celebrated almost immediately in Prishtina, with fireworks, American and Kosovo flags waved by supporters and shooting of firearms.