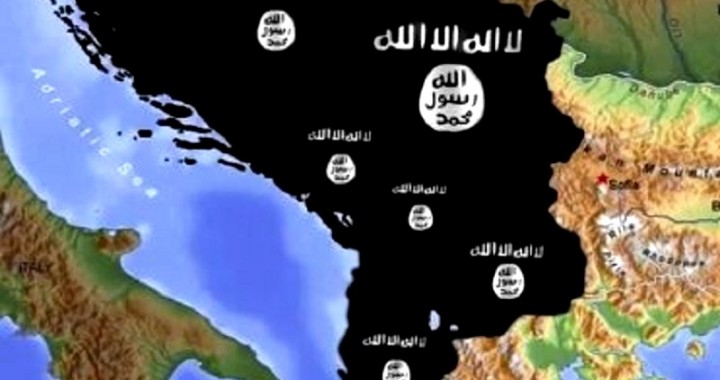 Is the Balkans to be feared? From drones and tanks to pistols

As ISIS attacks on European soil are getting close to being a monthly activity, a considerable number of media reports and opinion making circles in the West are trying to find new enemies – new sources of threat to the West, and particularly Europe. A Europe which seems to be appalled by the frequency of attacks. A Europe which seems to be lost in not understanding what and why is it happening. Surprising in itself.

In addition to the usual suspects in the Middle East, eyes are being turned to the Balkans, mostly towards the Muslim majority countries such as: Bosnia, Kosovo, and Albania, but also towards other former Yugoslav republics. In their reports and statements, the Balkans is being framed as Europe’s additional problem and a potential terrorist threat. There are two streams of threats that come from the Balkans according to this framing: the first is the “Balkan weapons” threat, and the other is the “Balkan jihadist ideological” threat.

In a December 2015, TIME magazine did a great job in making this link. In arguing that “Europe faces a new threat,” it found how the terrorists of the November 2015 Paris attacks used weapons imported from the Balkans to commit their horrendous crime. It framed the Balkans as the “weapons pipeline to Western Europe.” Christophe Crépin, a spokesperson for France’s national police union, told TIME that there “are links between organized crime and terrorists, and a route that goes from the Balkans.” TIME goes on to list some of the attacks which were carried out by small arms against certain individuals, groups, and sites across Europe.

Only a few days after the Paris attacks, the German weekly Der Spiegel was quick enough to also make a link between the Paris attacks and the Balkans – it even titled its report as “Terror in Paris: The Balkan Trail.” The report links a Montenegrin national to the arms that were allegedly used to kill around 90 people in Bataclan theatre in Paris. After the usual description of Montenegro and other Balkan countries as being led by mafiosos (forgetting to state that they are all propped up by the European governments) and how the Montenegrin national was living in a “dirty” kitchen (in a clean Europe), the report, of course, does not forget to mention Albania and Kosovo as potential links as well. The Balkan countries are always easy guesses and readily fit into such claims.

Just recently, Il Foglio, an Italian daily published an editorial piece titled something to the effect “What if Kosovo was the capital of ISIS in Europe?” The piece was also re-published by one of the Kosovo dailies. I think that besides having a definitely clickable title, the piece also does something what most  reports do – per usual, it finds blame outside Europe. The article mentions how some of the imams in the Balkans (Albania, Bosnia, and Kosovo) are radicalising and recruiting Italian youth. Again, the problem is everywhere around Europe, but in Europe. Every non-Westerner is threatening the peace embracing and peace loving innocent Europe and the West in general.

I am sure that, except for some nitty-gritty details, most of what these reports present are true. And one need not go and double check. Even the director of the Zastava weapons factory in Serbia, for instance, admitted that some of the weapons used in the latest acts of terrorism in Europe, were indeed produced in Serbia. However, the problem is not with the facts which have been so intelligibly presented. The problem is with the selection of facts, and how threat comes to be framed in and for Europe. For instance, one of the weapons used in the Paris attacks was legally sold to a US-based company two years ago. Framing the Balkans as if it is somehow conspiring against Europe with terrorist threats is too much of a push. Anything goes. Just get the usual suspects – the Balkans for organized crime, now I guess for terrorism as well, and then the “Arab origin” Europeans. They only need not be “pure”, “clean,” “white” Europeans. Otherwise, we have to change the discourse from “terrorism” to “criminal act,” and from a “terrorist” to a “psychopath.”

Now the interesting thing is as always, there is no real focus on the core and much larger problems that lead to all these symptoms that these reports deal with. For instance, why focus and report (proportional to the threat posed to the world) on dozens and hundreds of Western-built humvees, tanks, heavy military trucks, anti-tank stingers, rocket launchers, and other meaningful weapons left by US, Russian, and a few other western governments in ISIS’ hands, through which the latter successfully occupied key Iraqi and Syrian cities wreaking havoc in the entire Middle East, brutally massacring thousands of civilians and burning to the ground ancient heritage buildings, when one can focus on the Balkan produced pistols and AK-47s? Why focus on such heavy military equipment so diligently left by the West (including Europe) on the hands of the most brutal terrorist organisation the world has ever seen, when blame can be found on the easy targets such as the “backwards” and “always problematic” Balkans? How about the Western and Russian produced drones that ISIS has recently acquired? Still the Balkan pistols seems to remain Europe’s terrorism problem.

Lastly, on framing some of the countries in the Balkans as the source of ideological radicalisation of Europeans, which Il Foglio asks “what if Kosovo was the capital of ISIS in Europe?” I think it is a very good question that deserves to be answered only after the public receives answers to questions that precede this one. For instance: “what if Italy did not support the Iraqi invasion?” and “What if the Western-held Bucca Prison, which produced the ISIS masterminds, did not exist?” There are a lot of “what ifs…” which if answered, would not even have come to the good question Il Foglio asks.

The point of the matter is, despite many problems in the Balkans, and especially the issue of jihadi militancy which I myself worked on exposing more precisely, in trying to make such obscure links that amount to finding a needle in a haystack, the European and Western opinion makers in general ought to be looking for the problems where they actually lie. It is true, they can find some problems and links in the Balkans, but if they want to find the problem at its core, they need not go far from their offices. It is in their national parliaments where votes are taken on who to invade or bomb next. This is the change they should be seeking to make. Yes, political changes will soon be made in Europe. Unfortunately, however, changes seem to be likely to happen towards the opposite direction. Far-right is in a steep rise. Blaming and framing culprits other than oneselves will continue. This means that the problem will continue. One can then easily start asking, is the Balkans Europe’s militant jihad problem, or the other way around?

Shpend Kursani is a PhD researcher in the Department of Social and Political Sciences at the European University Institute, in Florence, Italy, where he researches post-1945 cases of contested states. He is also an external senior research fellow at the Kosovar Center for Security Studies where he conducted an in-depth research on jihadi militancy in Albanian speaking areas of the Balkans.