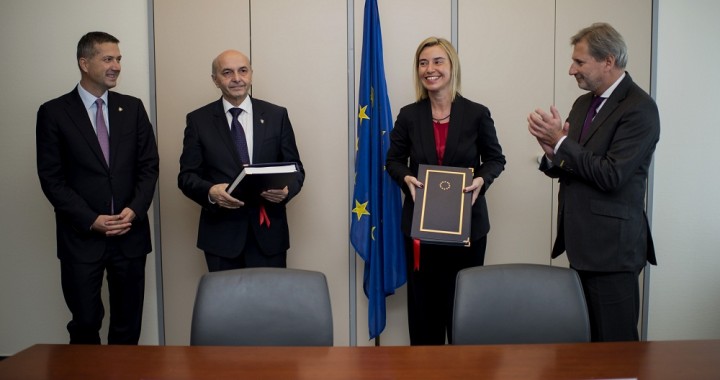 Kosovo’s Agreement with EU comes into force on April 1

Considered the most important agreement between Kosovo and European Union, the Stabilization and Association Agreement (SAA) comes into force tomorrow.

The implementation of the Stabilization and Association Agreement will begin tomorrow, on April 1, 2016,  confirmed Ramadan Ilazi, Deputy Minister of European Integration.

“It’s no joke, the SAA will be effective on April 1st,” he joked with the press.

“This is a historic agreement. With the entry into force of the SAA, Kosovo begins the journey towards European integration and accession, just like the other countries in the region,” claimed Deputy Minister Ilazi.

The SAA was signed by Kosovo and the EU on October 27, 2015. It was ratified by the Kosovo Parliament on November 2, 2015, meanwhile the European Parliament approved it in January 2016.  “The time frame of the agreement’s implementation is ten years, while [the agreement] will be reviewed after five years,” explained Ilazi.

“The SAA has three main objectives,” said Artan Collaku, Director of the Stabilization Association Process at the Ministry of European Integration. “These are: the fulfillment of political criteria to create a just state, the fulfilment of economic reforms which will ensure the integration of the Kosovar market in the EU, and lastly, the adoption of EU standards in all government departments  in Kosovo and their implementation.”

According to Council of the European Union’s website, the SAA will “establish an area that allows for free trade and the application of European standards in other areas such as competition, state aid and intellectual property.” The SAA is also supposed to cover a variety of sectors which also include education, employment, energy, environment, justice, and home affairs.

The SAA is a typical conditionality instrument of the EU to prepare potential candidate countries for membership at a later stage, says Fisnik Korenica from the Group for Legal and Political Studies (GLPS).

All of the countries in the region have signed some version of an SAA with the European Union, each one adapted to the particular state. The same is true for Kosovo: article two of Kosovo’s SAA explicitly states that none of the terms nor definition in the agreement or its annexes constitute the recognition of Kosovo as an independent state.

“As such, the SAA neither guarantees accession, nor can it oblige EU member states to keep Kosovo’s accession in their central agenda,” confirms Korenica. “Kosovo’s SAA therefore is less certain with regard to the European perspective of accession that Kosovo will have compared to other SAAs in the region.”

Instead, he explains, the SAA requires Kosovo to implement certain reforms, which eventually would demonstrate that it is a good-standing country to accede after several years. The reform process will be rigorously monitored and benchmarked directly from Brussels and the EU member states.

Any assurance for enlargement would need to go through EU member states, five of which still do not recognize Kosovo’s independence.

“[The SAA] is a good starting sign that Kosovo would need to use seriously to build a membership momentum in the near to medium future,” says Korenica.