Sabaja was Kosovo’s first brewery to push outside of the Pilsner box, but with new products from Birra Prishtina and Birra Peja, the country’s beer palate is evolving.

It’s Friday night in Prishtina, and most of us are having Pilsners. A soccer game is on the pub’s television, and fans nurse bottles of the cold, bitter stuff. Old men sit around a laminated table in a smoky bar, sipping raki and tipping back frothy mugs of pils. Even friends out for a night at a jazz bar are less likely to order cocktails than pints or bottles of Pilsner.

This isn’t entirely unique to Kosovo; Pilsner, or simply ‘pils,’ a type of pale lager, has global appeal. This light, crisp beer goes down like a glass of bitter seltzer, but comes with a buzz. The style was inspired by Bavarian lagers and originated in the Bohemian town of Plzen, now in the Czech Republic. Though by now there is plenty of variety and depth within the category worldwide, generally it’s conventional, drinkable, and mass marketable. 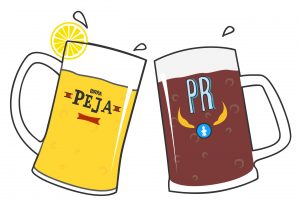 Kosovo’s long-established brand Birra Peja and its up-and-coming competitor Birra Prishtina have almost exclusively produced Pilsners, though each occasionally sell their krudo, an unfiltered Pilsner, on tap. A glass of krudo with a lemon slice is a highlight of Prishtina in the summertime.

But over the past couple of months, limited edition and new product rollouts suggest that Kosovo’s beer scene might be diversifying even more.

Sabaja’s history is a transnational love story: Butler met his partner, now wife, Etida Zeka, while in grad school at RIT in New York. They spent some time dating long distance, with Butler working in the music industry and spending his downtime with his home brewing hobby. During one of Zeka’s visits to New York, she tried his homebrewed imperial stout.

“She was like, ‘I never had anything like this. We don’t have this in Kosovo, and I think we might be able to sell it,’” Butler recalled.

Zeka had been working at a research institute on a project dealing with wineries in Kosovo’s wine region, Rahovec. She had access to the institution’s market data suggesting that a small portion of Kosovo consumers, about five per cent, would be open to something new. This was substantial enough for Butler, so he made the leap in 2012, moving to Kosovo to collaborate with Zeka on the new business plan.

“In the beginning, the donors were family and friends. We called it ‘the families, friends, and fools,’” he laughed. They purchased brewing equipment, all built in Rahovec, and opened a brewery in the Prishtina suburb of Hajvalija, towards Gracanica. 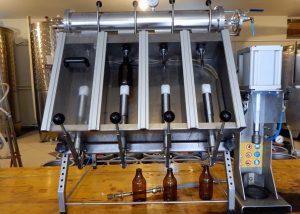 The first years were riddled with mishaps, partly because these new business owners were working with a learning curve, and partly because it was the first time Kosovo companies made such equipment. To this day, Sabaja’s machines are manual. Having to brew everything by hand has meant that there have been a few late nights when the partners fell asleep and the drainage flooded the building.

Sabaja’s namesake product is its IPA, Kosovo’s first.  IPA—spelled out in the US but pronounced eeepah around these parts, is an acronym for Indian pale ale. Legend has it that this super bitter ale originated in the late 18th century when British imperialists brewed heavily hoppy ales that would make it across long, hot journey to eastern colonies. 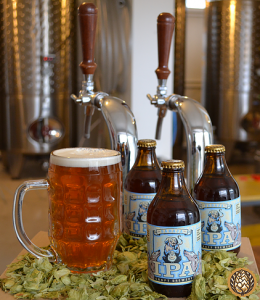 And it’s no surprise that Kosovo’s first IPA has ties to America; this style, steeped in the history of British colonialism, recently had a mega revival in the American craft scene. A European craft scene has been blooming these days, too, but unorthodox flavors are still catching on the continent, which for the most part respects the German Reinheitsgebot – the beer purity law.

Sabaja’s IPA is a brilliant, bright gold color and tastes bitter, floral, and grassy. It’s strong on the palate but refreshing and clean. It isn’t carried in a majority of bars in the capital, but can be found on draft or in bottles at several places like Soma, Dit e Nat, Miqt, and Babaghanoush.

“We have a couple of foreign brands selling different kinds of lager in Kosovo, but besides that, people here are mostly used to pils. As a local company, we wanted to offer our Birra Prishtina Lager to try and bring something new at an affordable price, and to try and change consumption culture in Kosovo,” said Vjosa Ukaj, Birra Prishtina’s marketing manager, at their brewery in Prishtina’s industrial zone. 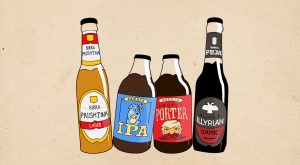 She was referring to the company’s new Belgian-style lager, which is softer and more toasty than the pils. Over the holiday season, Birra Prishtina distributed their Lager beer as well as a new on-tap dark ber to the local markets and bars in Kosovo for a promotional period test run, and was pleasantly surprised by the highly positive consumer responses. The lager is currently available in six-packs from several markets in Kosovo, and will soon be available in 24-packs for retail and bars. 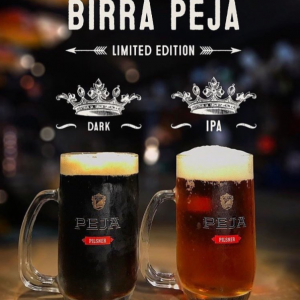 Birra Peja, Kosovo’s biggest brewery, is currently selling two special edition beers–the Illyrian Dark and IPA–but right now these can basically only be found in a few markets, primarily in the western Kosovo town itself. The brewery’s facilities go back to the 1970s, though were only privatized in 2010. Its pils is stocked in even the most remote village and has a heavy presence in Albania as well.

Plenty of macro-breweries around the world produce both a pale lager and a dark beer, but Peja’s experimentation with the IPA category is particularly fascinating. Peja’s Illyrian IPA is bright and slightly bitter with familiar floral notes, though somehow not quite like an ale. But if it continues to be developed and then expanded in distribution, it could become a welcomed novelty.

Growing pains in an emerging market

Despite Sabaja’s much welcomed place in Kosovo’s craft-loving circles, it hasn’t been easy to break into the market. Butler distributes all of his products in his own economy car, has had to close down Sabaja’s downtown restaurant pub, and has minimized the number of products for sale. Typically, the IPA, and if you’re lucky, the smoked porter, are now the only Sabaja brews available.

Established in 2014, Birra Prishtina also faces some of the overarching challenges in Kosovo’s beer market —for one, the unavailability of ingredients in Kosovo, since the country does not yet have a farming and processing industry for hops and malt. 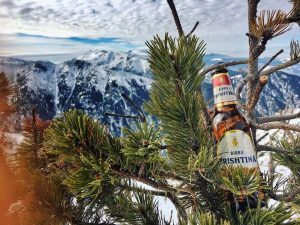 But Prishtina, the second largest domestic producer in the country, had the resources to tap into the technical benefits of owning state-of-the-art equipment, all built by the German company Kaspar Schulz, and all fully automated.

From the get-go Birra Prishtina’s founder Sheqer Ukaj contracted brewmasters from Germany, Italy, and Slovenia to develop products and train the team. Vjosa Ukaj explained that this is because the company esteems to the quality of traditional European breweries.

Ukaj said that Birra Prishtina has been quickly welcomed by Prishtina’s beer drinkers, characterized by a large young population with healthy levels of alcohol consumption. They’ve seen continuous growth outside of Prishtina as well, with a wider Kosovo distribution range day by day.

People want to drink a quality domestic product. Still, she said, there’s plenty of competition with the foreign market, with over 40 beers on sale in Kosovo. Plus, as a domestic brand, they have to pay customs on each raw ingredient that they import. 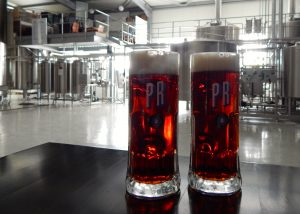 “It’s an expensive industry. There are challenges in Kosovo, but we will keep at it,” Ukaj said.

And there’s plenty on the plate for 2017–expanding the production and distribution overall, continuing to produce the dark and lager beers, and even looking forward to craft something new.

Sabaja has big plans too: dreams of opening a brewpub on the mountainside of Badovac lake, with hiking trails and a permaculture farm, and plans to strengthen their distribution power. 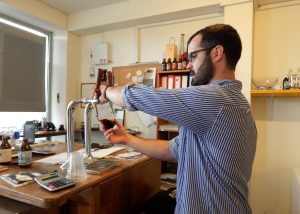 “We’re good at branding, a great product, and a loyal customer base. But it’s me pulling up to a bar in my Golf and hauling a keg inside, and that doesn’t work well.”

It remains to be seen if Birra Prishtina and Birra Peja, who emphasize integrity towards European tradition, will experiment with the playful aspects of American craft culture. All three companies esteem quality, but for now, even with Peja’s special edition IPA, Kosovo’s macro-breweries still belong more to the world of Korca, Krombacher, and Lasko rather than the DIY spirit of Serbian Kabinet or Slovenian Human Fish. But any expansion beyond the pils will surely push Kosovo’s beer market into new territory.

And having other companies branch out beyond the pils, according to Butler, is actually welcomed competition.

“It’d be really good for us to have competitors. It would legitimize the product category. There’s some resistance to new flavors here, and if there was another brewery doing anything like what we do, people would see it as a thing instead of just Sabaja.”