With Anibar in full swing, Peja is buzzing with young animators, students, filmmakers and filmgoers, and Amy Winfrey and Peter Merryman are relishing the chance to be a part of it, reliving their days as students when animation festivals were the best excuse to get out of Los Angeles.

“We haven’t been to a whole lot of animation festivals, but we’ve heard from others that are here that this one is particularly unique,” they said. “You get to spend a lot of time with the filmmakers and because it’s so small you run into everyone all the time, we’ve never had the chance to meet this many filmmakers and actually talk to them before.”

Winfrey and Merryman’s presentations are among the most anticipated of the week at the international animation festival, which began on Monday.

When I met the directors of the animated television series Bojack Horseman on Thursday, which since its third season has been available on the streaming site Netflix, Winfrey and Merryman were ironing out the finishing touches of their first presentation, planned for Saturday at 4pm at Peja’s Jusuf Gervalla cinema.

They hope to delve into the role of storyboard artists and animators and explain what it means to be a director for such a prolific show.

“I’ll take the script and try to figure out how I want to visualize everything, if they’re talking where will it be, is it a cafe, are they eating Mexican food? I think about what more I can bring to the scene… are there gonna be a lot of fish people as waiters?” she laughed. “It’s just adding whatever details you can think of that will bring it to life.” 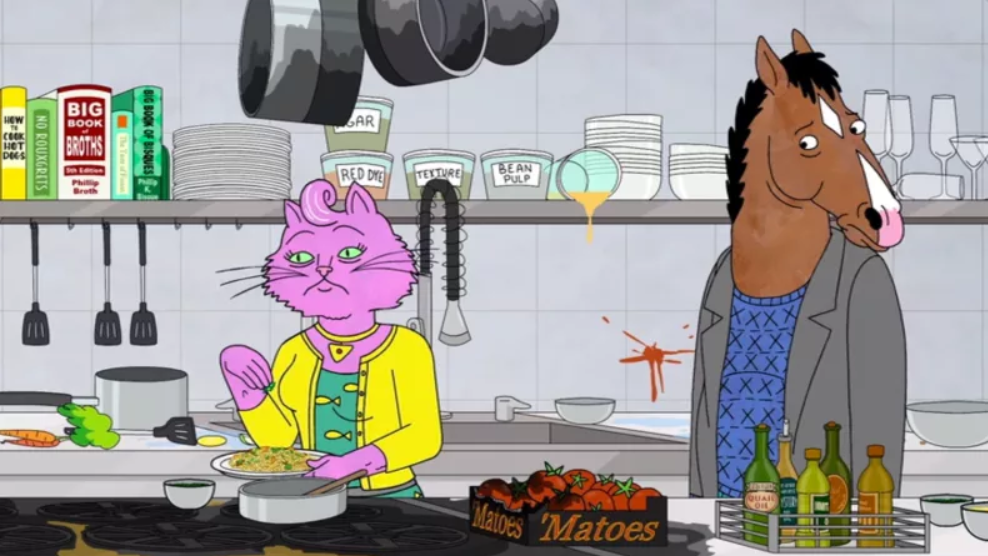 Princess Carolyn and Bojack in episode ‘Best Thing that Ever Happened.’ Image: Netflix.

Set in present day Hollywood, in an anthropomorphized world where the publishing house Penguin is actually run by a suit-clad penguin, Bojack Horseman follows the life of Bojack, a washed-up alcoholic horse clinging to his 90s sitcom fame, battling addiction, celebrity, self-destruction and depression.

“We’ll get some specific direction for characters, sometimes one guy needs to be a caterpillar because at one point he’ll go into a cocoon, but sometimes we just get a name,” said Winfrey. “You can say ‘Boy, I really like skunks, this guy is gonna be a skunk!’ so you get to make those decisions, and the character design will follow.”

Winfrey and Merryman grew up in California, both studying animation at the University of California Los Angeles, UCLA. Winfrey originally planning to study medicine, and Merryman architecture, both had unusual roots into the animation industry, landing a job in one of the most famous adult animated TV series purely through chance and a bit of luck.

“Animation wasn’t a hot career like it is now,” said Merryman. “We ended up doing South Park because the production for the first season was happening in the same little neighbourhood as the UCLA campus. The creators put up a little post on the bulletin board saying “Looking for Animators!” and we just went for it. We both got to kill Kenny a few times,” he chuckled.

Winfrey got her break with South Park as well, leaving her job at the campus library to first add in the lip syncing and movements of the mouths of characters in South Park, one of the most iconic  features of its animation.

“Now In LA animation is mostly a business, so a lot of our time is spent looking for professional projects, it’s been a really long time since we’ve been able to do anything personal,” said Peter. “The screenings we’ve seen in Kosovo makes me see that we’ve been kind of insular in this world of commercial animation, with the festival there’s so much more variety and creativity. Even with this non-Hollywood stuff, the style is unpolished in comparison, but still so sophisticated.”

Merryman and Winfrey have been in Peja since the start of the festival on Monday, meeting animators, producers, students and organizers of Anibar, which is celebrating its ninth year of existence, showing short and feature length animated films from around the world.

“I sometimes feel like a cog in a wheel when you see people here with so much freedom,” said Merryman. “On the other side of the coin, people here keep saying how inspired they are by Bojack and that’s really great to hear, they really admire what we’re doing, it’s super satisfying to work on something that it seems everyone has seen in a way.”

Bojack Horseman has a unique animation style, and despite its anthropomorphic universe, remains a relatively realist portrayal of  Hollywood in the present day. Merryman explained that the most fun they have with the show is the short bursts where they are able to to play with the style for short sequences – Bojack plays with style and structure constantly, using silent episodes, slapstick punnery and wordplay, unique animation sequences and celebrity and pop culture references satirizing real life situations in a way that balances humour and the much darker themes it focuses on.

Merryman and Winfrey will explore the creative process behind directing over Saturday and Sunday, picking one episode from the fourth season of Bojack Horseman, and explaining their different roles contributing to the episode from start to finish.

“We’ll show an episode then talk about the various steps centered around what we do, it’s more focused on storyboard,” said Winfrey. “Saturday we’ll try to show the complete process of doing an episode, we’ll have some clips and pictures and things, whereas Sunday is specifically on storyboarding, which is just one section of what Saturday’s presentation is, in much more detail and more technical.” 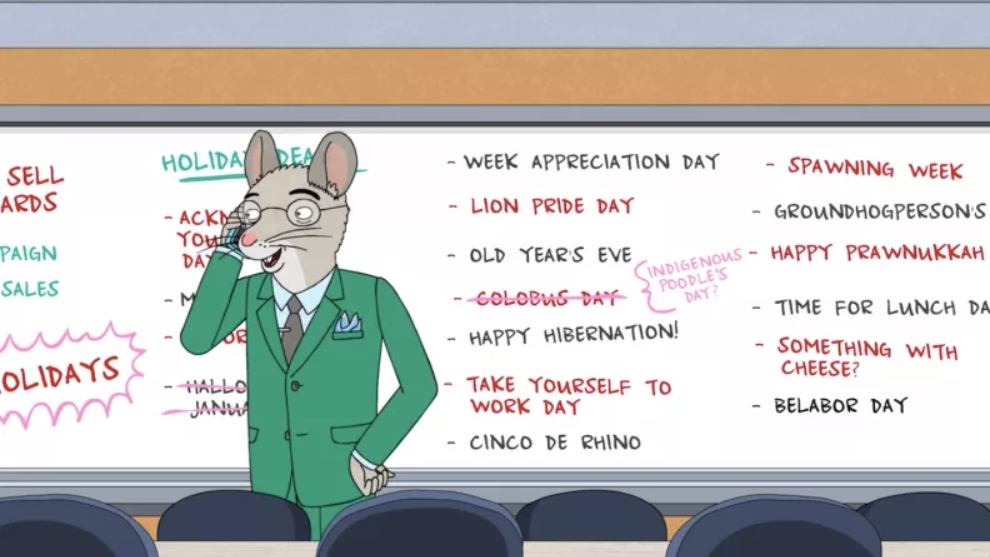 Storyboarding is the process of creating the images that make up an animation sequence before they are visualized onscreen. Scene by scene, storyboard artists create a map of where the episode begins and where it’s going to go, and often, Winfrey explains, the fun stuff in between.

“All my storyboard artists are very funny and talented people, we’ll sit with the script and try to think up as many more funny details going past the script,” said Winfrey. “Maybe there’s a whiteboard behind the character and we’ll get fill it up with funny holidays!”

“While the script is important for getting all the story in there, you also find the little gaps and opportunities to put something else in to embellish the story,” said Merryman. “There’s always room somewhere to do one quick gag before we continue in on – you don’t want to distract from the overall story though, so you have to find your moments.”

“I’m not going to ruin anything for next season, but I do have a restaurant scene where in the background, someone’s ordered a pig’s head, but there’s also a pig sitting eating at an opposite table looking awkwardly over at it, because we’re in this weird animal-human world where people still eat meat,” Winfrey laughed. “The creator is a vegetarian, which is probably why it’s so funny for him, to show how ridiculous this is.”

“We realised that for Saturday we went for a kind of weird episode, but it has a great framing story,” said Winfrey. “I feel like this episode will work really well for this particular theme of the festival. Focusing on this character that really just started as Bojack’s girlfriend and evolved over time into this whole character, it’s a good place to start.” 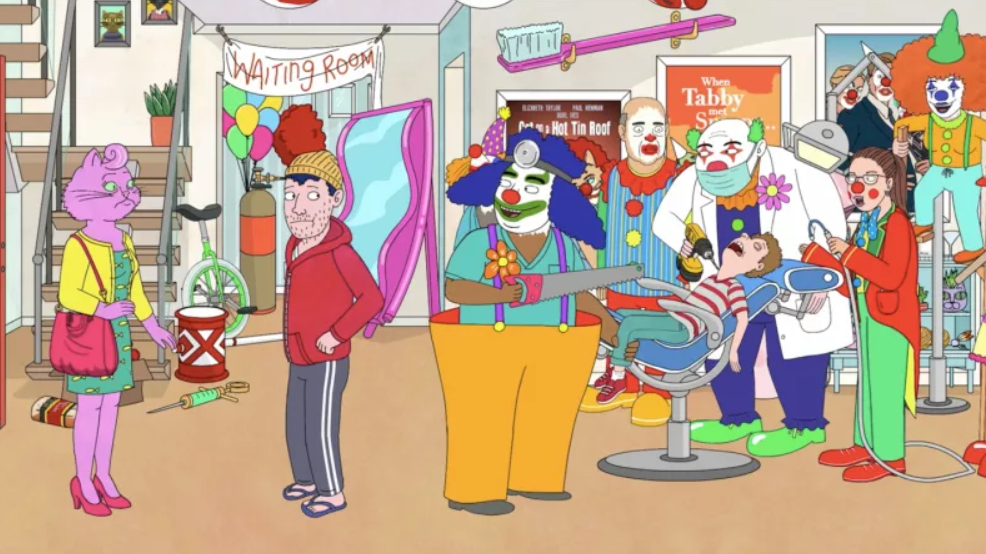 Throughout the week, the films, presentations and workshops at Anibar have all been dealing with the theme “50/50” addressing gender equality in the film industry.

The plot of Bojack Horseman deals with gender and sexuality in its own way, often through an intentionally frustrating lens, pinpointing issues like commercialization of the search for equality and the role celebrities male and female often play in exacerbating the problem. However, Winfrey explains, the construction of the show itself and the tools of animation work in other ways to subvert traditional roles that women play on screen.

“You have more of a chance to give different characters personality and life. There were some characters I didn’t really warm to immediately, like Princess Carolyn, I liked her voice and I liked that she was a cat lady, but I’ve really started to identify with her more over the course of the series,” said Winfrey. “Particularly with everything she’s gone through and also just having a 40-year old woman character is important, it’s something that doesn’t happen enough.”

Merryman believes that having anthropomorphized animated characters in a series makes it easier to portray characters closer to real life, allowing honest representation of human emotion that would not be possible in live action television series, while not losing any wider audience appeal.

“I think it does do something really palatable for these characters,” he said. “It lends a level of abstraction that allows you to express the characters in a different way. For example if you think about the level at which Bojack is basically despicable, the animation and him being a horse, there’s a charm built in to it that means he can get away with more.”

“This applies to all the characters in a different way. For Princess Carolyn, on a live action TV show a 40-year old woman wouldn’t be received in the same way as a pink cat lady is, she’s immediately more charming to everybody. It affects how the audience sees all these characters, they’re all very human, but because they look like animals, we can take liberties in a sense.”

Merryman and Winfrey both agree that animation is more than capable of falling foul of misrepresenting women characters and marginalizing their stories, just as much as any live action show could, making this year’s theme all the more poignant.

“In animation there will be the one pretty lady, the one mom, it’s like this particularly in adult animation,” said Merryman. “Even in children’s animation, it’s a bunch of adventurous guys, and then the girl who is the voice of reason.” 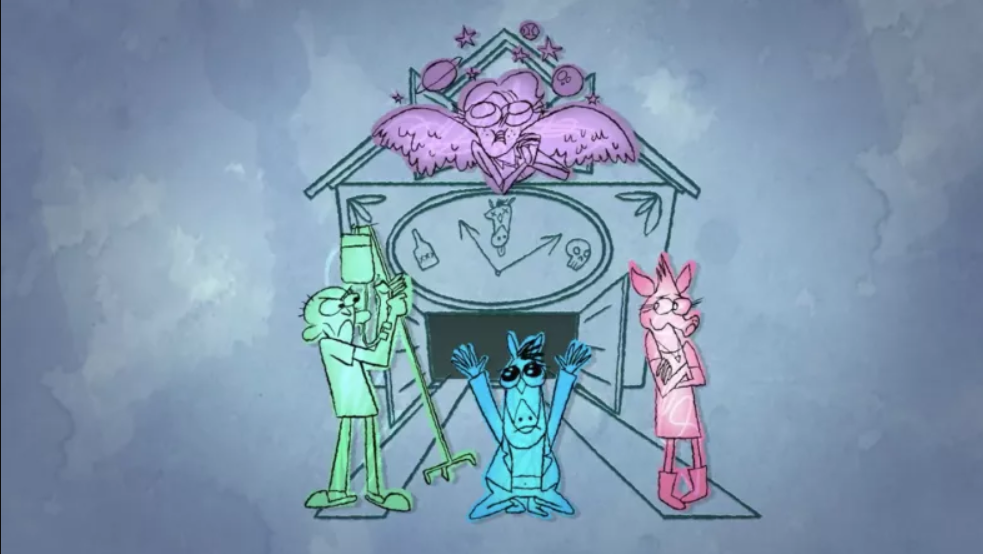 Inside Bojack’s head in ‘Stupid Piece of Shit.’ Image: Netflix.

Merryan and Winfrey will finish their new project early next year, Tuca and Bertie. A comedy featuring two female non-white leads, they hope that it will pave the way for more shows like this coming to the fore. While Tuca and Bertie plays with abstraction a little more than Bojack does (“Their eyeballs can fall out, and it won’t be that traumatic,” Winfrey laughed), they explain how animation can lend itself even more to shows like Bojack that, while realist in their animation style, explore difficult emotional situations and are able to visually represent them in a very accurate, but also ruthless and hard hitting way.

“Even with Bojack being relatively grounded, we get to do different things stylistically, for example in the episode ‘Stupid Piece of Shit,’” explains Merryman, referring to an episode which spends a lot of time inside Bojack’s head, giving insight into the real-time effects of his depression, represented by a more scrawled and panicked animation style. “He’s got this internal dialogue going on that would be a stretch in any kind of live action show, but it feels more natural in animation, it’s less of a jump, you just have to step through the doorway and into his head, so it gives you more opportunity to unground the show, if just for a while.”

Amy Winfrey and Peter Merryman will be presenting at 4pm on Saturday, 18 August and 2pm on Sunday, 19 August at Jusuf Gervalla Cinema in Peja. For more information, check out Anibar’s website.