Childhood interrupted: a story from Plemetin

As we mark International Children’s Day, many of Kosovo’s Roma, Ashkali and Egyptian youth continue to live in miserable conditions, plagued by food, education and healthcare shortages with no social or institutional care in sight.

The five children of the Mekolli family from Plemetin village in Obiliq will not join the June 1 celebrations for International Children’s Day in the center of Prishtina. There will be no celebration for them.

On the contrary, it will be a very typical day: as soon as the sun rises, all three of the Mekolli boys, together with their dad, will head to the capital to collect bottles and cans from dumpsters.

Meanwhile, their mother Halide will spend the day with her two youngest children, in their home built from metal sheets, a few kilometers outside of Prishtina.

For Halide, important dates or public holidays mean almost nothing. She has only one concern: to provide her children with food for one more day. For her, each new day is just one more in her struggle for survival.

“We have five children, three of them are working. The eldest is 12 years old. They have gone with their father to collect cans,” said Halide, explaining the difficult conditions she lives in, lacking almost all the basic essentials needed for day-to-day life. 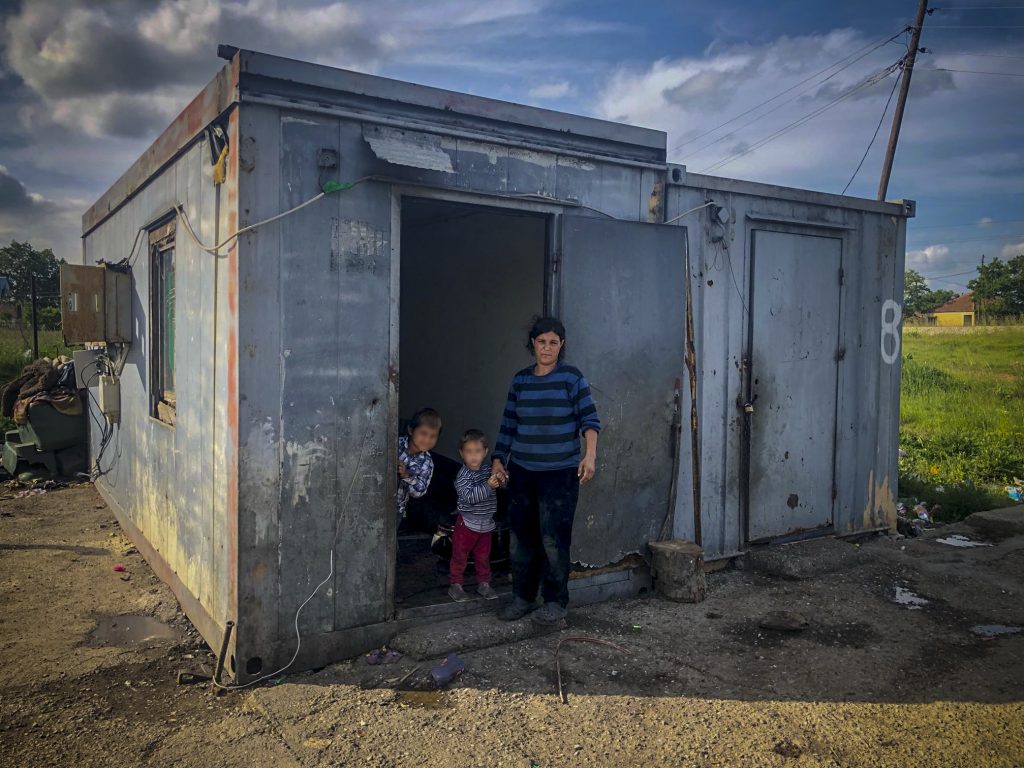 “I do not even have a washing machine. Look at where we live, seven of us,” she said, gesturing around their home. As Halide tells her story, her two youngest children walk barefoot across the yard. A pile of clothes and unwashed bottles and cans are stacked in one of corner of the house. Halide and her children have no choice but to live in inhumane conditions, and the house, and her family, feel forgotten.

Halide explained that not far from here, the family has a separate parcel of land where, one day, they hope to build their ‘real home.’

“Right now, we only need a home. Recently, my husband had to undergo surgery,” she said. “Although, things are not as bad as they could be, since he is working with the boys.”

None of the children in the Mekolli family have attended school, not even for a single day. “I do not have the conditions to keep them neat and clean, and school attendance requires cleanliness,” she said.

Next to the Mekolli family home is the Plemetin camp, where dozens of families from the Roma, Ashkali and Egyptian communities live in miserable conditions. They have faced these conditions every day since the end of the war, with no institutional care, forgotten by society.

“We are Ashkali,” says Halide, the anger in her voice unwittingly revealing this as the cause of her family’s hardship. 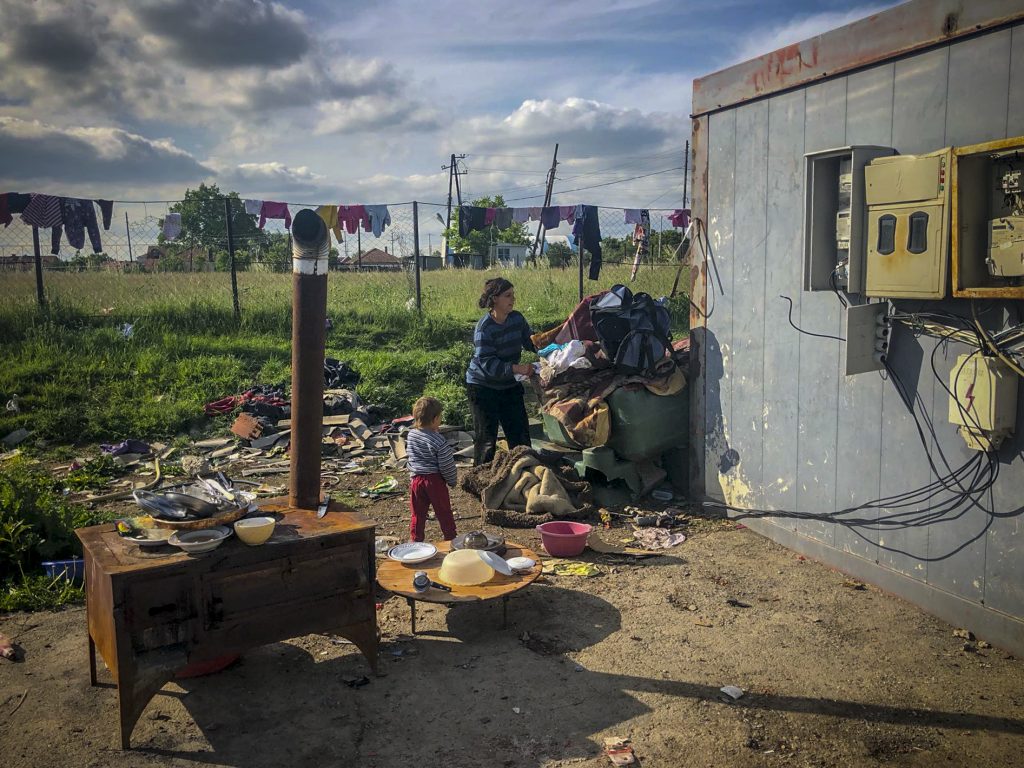 The Mekolli family is one of the 24,964 families in Kosovo that are part of the Kosovo Government’s Social Assistance Scheme. The money they receive through this scheme is 120 euros per month, defined on the basis of the number of family members. Social assistance in Kosovo varies from 60 to 180 euros per month.

According to the 2017 Household Budget Survey conducted by the World Bank and the Kosovo Agency of Statistics, it is estimated that 17.6 percent of the population in Kosovo live in absolute poverty, surviving on less than 1.82 euros for an adult individual per day, while 5.3 percent of the population live in the extreme poverty bracket, living off less than 1.30 euros per day.

The Mekolli family and many other families living in difficult economic conditions are part of this category.

According to data provided by the Ministry of Labor and Social Welfare, over 50,000 children in Kosovo live in extreme poverty. Meanwhile, according to various domestic and international reports, poverty is one of the main causes of the economic exploitation of children.

While visiting the Mekolli family, the BIRN team also spoke with a child named Sabedin, a guest in the house. “A family friend,” Halide told us, introducing the newcomer.

“His mother died and now he lives with his father. He collects cans, too. I take care of him as I do for my own children,” she said. Sabedin is quite young, around 12 years old, but was forced to abandon school in order to make a living. 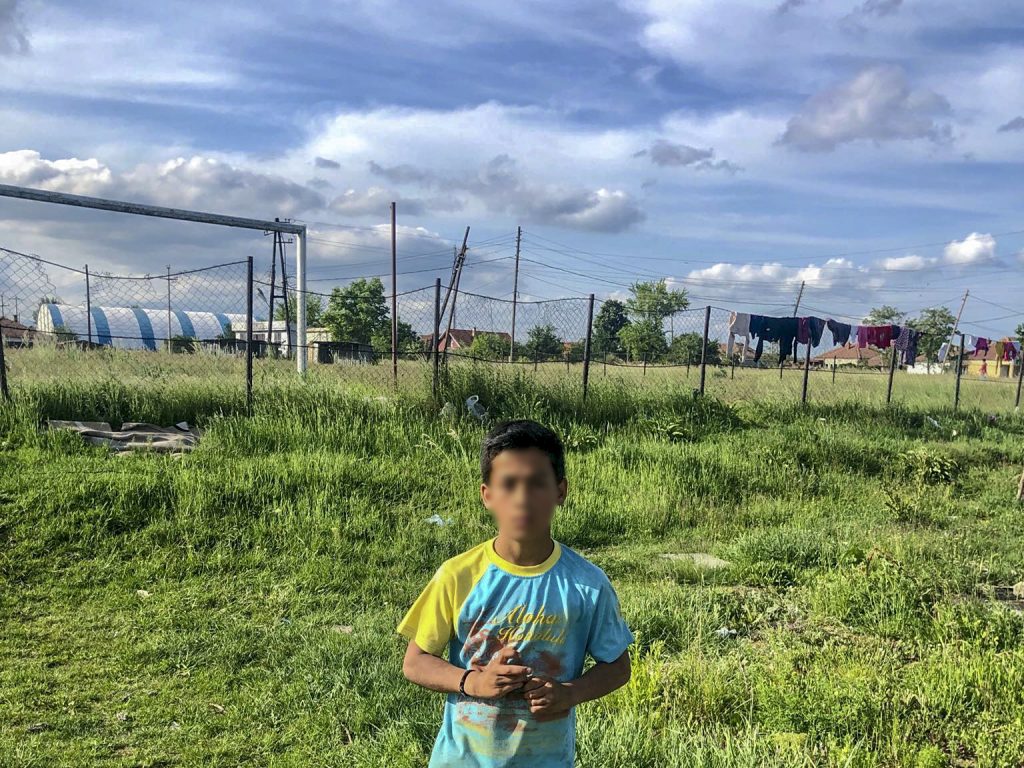 “I live with my father alone. My mother passed away. We are four children. My uncles help me a bit,” he told BIRN. “I would like to go to school but, instead, I have to work, searching for leftovers inside the trash cans.”

The number of children like Sabedin who are forced to work for a living is rapidly increasing in Kosovo. Children who are forced to work have been defined by international agreements on children’s rights as being subject to economic abuse. Because of the lack of protection, either by family or by society, these children are exposed to many different forms of mistreatment.

Reports indicate higher risks of such abuse for children from minority communities.

“Lack of education significantly increases the risk of child poverty, and as a result, this forces them to engage themselves in labor. Around 17 percent of Roma, Ashkali and Egyptian community children are forced to work,” states the Ministry of Labor and Social Welfare’s Sector Strategy Implementation Report 2018, drafted by the Kosovo Education and Employment Network.

According to a 2011 census, Roma, Ashkali and Egyptian communities comprise two per cent of Kosovo’s population, about 36,000 people. A survey of non-majority communities conducted last year by the United Nations Development Program, UNDP, found that 78 percent of Roma people had no formal employment, education or training. The number was higher for young Roma women: 88 percent. Meanwhile, only 10 percent of Roma beyond the age of 16 have access to health insurance.

Officials from the Ministry of Education, Science and Technology, MEST, were not able to confirm how many children have abandoned education as a result of their engagement in labor. Shpresa Kokollari, who works at the ministry, said that her department has established a electronic notice system across schools, which educators can use to notify the ministry about children that abandon their education. However, the exact number is unknown, as, according to Kokollari, the notice system is not being used effectively.

“In the academic year 2018/19, 128 cases were reported using the Early Warning System,” Kokollari told BIRN. “Five of these cases are children who are at risk of abandoning school because they are also involved in labor.”

According to the Kosovo Agency of Statistics, 10.7 percent of children in Kosovo are involved in hard labor, while 6.8 percent of them are working in hazardous conditions. At the same time, data from the MLSW shows that in 2016, at the national level, the country’s institutions identified only 62 cases of child labor. 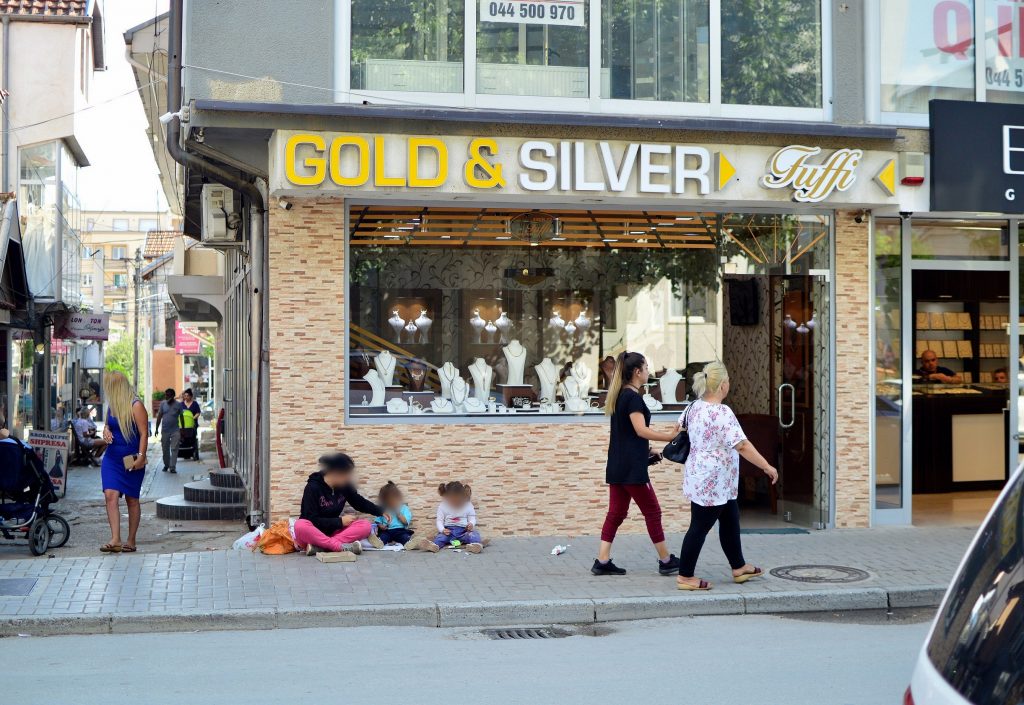 There is no accurate data providing the exact number of child beggars. However, officials from the Kosovo Police have stated that during the 2018 they identified a total of 127 children wandering the streets, while in the first five months of 2019, 20 children were identified.

“These children were encountered either as street beggars or when carrying out other duties such as cleaning the car windshields or collecting various scrap metal,” said a response from Kosovo Police. According to them, 41 criminal indictments for the offense of child abuse or abandonment have been filed against the parents of these children.

The Kosovo Ombudsperson, Hilmi Jashari, told BIRN that the current situation of children wandering the streets in Kosovo and the failure of institutions to deal with the situation constitutes a serious violation of human rights, the Constitution of the Republic of Kosovo, international standards and relevant legislation in force.

“The Ombudsperson considers that Kosovo institutions should have done more to prevent, treat and adequately address the issue of children wandering the streets, since over the years this phenomenon has not declined,” Jashari said.

Young and without legal protection

Children engaged in forced labor on the streets is a global problem. A report from the Save the Children organization says that across the world, approximately 700 million children have had their childhood interrupted, with many factors related to poverty being involved.

“Childhood around the world is being disrupted due to ill health, exposure to violence and war, early marriage, teenage pregnancy, or the obligation to abandon school in order to be involved in labor,” says the report.

According to Save the Children, compared to other the countries of the region, Kosovo’s position is as bad as it could be in terms of child protection, and it has the highest mortality rate for children under the age of five.

Kela, 17 years old from the city of Durres begging with her toddler sister. | Photo: Antonio Çakshiri.

Klevis Vaqari from the Coalition of NGOs for Child Protection in Kosovo, KOMF, says that municipal regulations on the rights of children, which have already been approved in seven municipalities of Kosovo, represent the vision of these municipalities, which is to be a child friendly municipality in terms of guaranteeing their rights and protection.

“Through approved regulations, municipalities have undertaken a pledge that all municipal institutions and professionals with a mandate to protect children shall coordinate and undertake all actions to provide services for these children,” said Vaqari.

Meanwhile, the MLSW Implementation Sector Strategy report, despite having no law on children’s rights for reference, has identified a number of other problems with children wandering the streets.

“Currently, child protection is included in the Law on Social Services,  but is still insufficient. The budget allocated for social protection does not have a specific division for child protection,” the report reads.

According to this report, 11 percent of children aged 5-17 in Kosovo are involved in labor. The majority of these children do not attend school, and boys are more likely to be forced to work.

The lack of day care centers is also an obstacle to the protection of these children, as there are no specialized rehabilitation and reintegration services that can help these children re-socialize, educate and engage with their peers for further development.

“There are no major residential centers in Kosovo for children without parental care, which increases the risk of non-education of these children, and their early involvement in hard labor. Caring for these children focuses on providing alternative support for children, such as caring for kinship, family housing, and guardianship,” the report concludes.