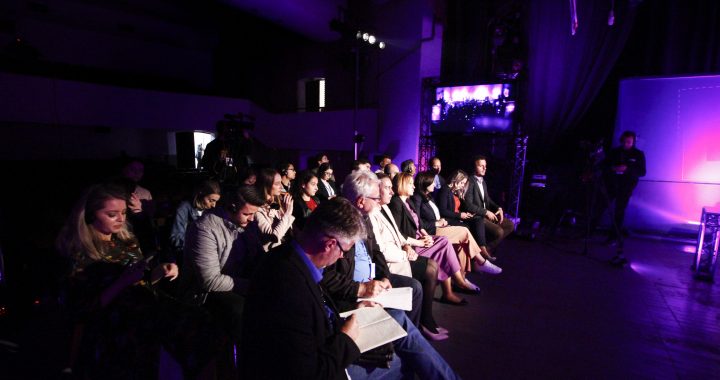 In the final episode of BIRN's televised #DebateforReal series, local officials and religious leaders in Kamenica opened up about their experiences living in a community shared between Kosovo Albanians, Serbs and Roma.

The fading of ethnic hostilities between Albanians and Serbs is visible in Kamenica, despite around two decades of strained relations between these two local communities.

Activists, municipal leadership and citizens came together in an open mic debate, organized by BIRN Kosovo, in Kamenica to speak about relations between the two ethnicities.

This term, the Municipality of Kamenica is led by two young individuals, the mayor and the deputy mayor, who came together and discussed the cause of their ethnic cohabitation.

Qendron Kastrati, the Mayor of the Municipality of Kamenica, said that the credit for pushing cohabitation of different communities in Kamenica belongs to its citizens.

“We, the new governance structure, have been a little more progressive in this aspect and are very interested in advancing such processes, and we consider that it is on us, the youth, to take braver decisions for our future,” Kastrati said.

He added that citizens should be treated equally and appraised for their work and professionalism, not on ethnic or religious bases.

Regarding cooperation with the Deputy Mayor, a Kosovo Serb, Kastrati said that he doesn’t consider this cooperation to be an act of national treason, as they have a common cause – to have a diverse and multicultural society.

“We didn’t have the legal obligation to appoint a Deputy Mayor for Communities, as communities comprise merely 5 percent of our population, but I personally don’t speak Serbian too well and we considered it important to have a Serb community representative in our cabinet, in order to ensure the inclusion of Serbian-speaking citizens too.”

Bojan Stamenkovic said that his appointment as deputy mayor of the municipality was followed by various media in Serbian and Albanian, and with quite some negative comments too.

“Qendron and I have both courage and good will. Certainly, there is the occasional negative comment, but we don’t pay much attention to them. We believe in real values and work to achieve them,” Stamenkovic said.

Further, Stamenkovic explained there are courses now offered by Kamenica Municipality which will help advance further cohabitation between Serbs and Albanians.

“We know all too well that Kamenica is a good example of multi-ethnicity and cohabitation. But we came to the conclusion that the greatest problem faced is communication. We don’t have that problem among the older generation, because older Albanians and Serbs knew the language of their neighbor, but the younger generation has had much less communication in these 18 post-war years,” he said.

Silvija Raskovic, a Communities and Returns Officer in Klina municipality also taking part in the debate, said that cohabitation between Serbs and Albanians is also present in Klina Municipality, but not at a satisfactory level.

According to her, the returned Serbs in this municipality faces frequent thefts the perpetrators of which were not revealed by the authorities.

“We cooperate with each other, we also have a positive example of a butcher employing Serbs and Albanians. Recently we had frequent occurrences of thefts, robberies, extortions, and we can’t brag much about our cohabitation,” Raskovic said.

She added that Klina returnees are not interested in staying. She mentioned that some Kosovo Serb land is for sales, as a result of lack of employment.

“We don’t have many interested in staying either. We have frequent land sales. There is no employment. I understand that the situation in employment is similar in other parts of the country and among Albanians, but in our municipality we have only two Serb employees. This is too little,” she added.

“Regarding cooperation, both with the communities office and Serb returnees, civil society has good cooperation with them,”she said. “Some women are members of the Zana organization, and mostly work on making crafts together,” Gashi said.

She said that local and central institutions should cooperate in organizing common activities for different ethnicities.

“Institutions need to draft a strategy, because there is no lack of cohabitation and it’s not like we didn’t welcome returnees,” she said. “Since 2003 and 2004, the Municipality of Klina welcomed the returnee community and was always cooperative and open, similar to civil society organizations which organize numerous activities to their benefit.”

Among other things, Gashi said that the lack of funds hinders civil society efforts, adding that institutions lack initiative to sit around the table and draft a strategy that would cultivate cohabitation between various ethnicities in Kosovo.

Kastrati said that communities should not be treated separately, and that no groups should be favored when it comes to allocation of funds. According to him, treating citizens as equals also cultivates cohabitation in their habitats, in the case of his municipality: of Albanians, Serbs and Roma.

“Kamenica citizens reside in the same neighborhoods and it is impossible for them not to have the same problems and needs, that’s why we can’t treat them as separate,” Kastrati said.

Dragisa Jeremic, an orthodox priest from Kamenica who has lived there for seven years, said in the debate that a day when he doesn’t meet an Albanian for a conversation or coffee is a day lost for him.

“I am a priest of the Serb Orthodox Church in Kamenica, but to me a day is lost if I haven’t had the chance to meet and discuss with Albanian neighbors, often having coffee together. This is very natural and normal in Kamenica. I have great cooperation with imams here in Kamenica too,” Jeremic said.

Jeremic added that Serbs and Albanians in Kosovo were always close to one another, and that they should now take Kamenica as an example of cohabitation.

“Others can come here and find a good example of cohabitation between Albanians, Serbs, Roma and other nationalities, of how to live in Kosovo basically. I was born in Kosovo, and I don’t know of a place inhabited by only Serbs or only Albanians,” he added.

Further, Jeremic said that citizens should be distanced from political tensions and should continue cooperation.

Raskovic added that religious leaders have an important role in Klina, due to the significance of messages they give in favor of preserving neighborly relations.

Mayor Kastrati said that religious leaders in Kamenica have often had a greater role than the municipal leadership in preserving good neighborly relations between Albanians, Serbs and Roma.

He mentioned the public city park, which was a common initiative of religious leaders and benefits all Kamenica residents.

In addition to being the first to distribute croissants and milk to schools, Kastrati said that Kamenica is also the first municipality to publish all documents in both official languages of the Republic of Kosovo.

Deputy Mayor Stamenkovic said that a problem in Kamenica Municipality is the exodus of  youth of all communities.

“Our objective, and the focus of our work at the moment, is to empower youth, through programs aiming to establish new businesses mostly related to agricultural production. Thus, we expect to have the Ministry of Agriculture and other donors and international organizations promote our efforts and support the youth,” he said.

As a consequence of migration and drastic decrease of the number of students in this municipality, Kastrati requested an announcement of a referendum for diminishing the number of teachers.

Kastrati said that according to the Kosovo Statistics Agency, two thirds of the population are considered unemployed, but the education sector should not be viewed as an employment possibility. According to Kastrati, in the academic year of 2006-2007, there were 8,200 students, while in 2017-2018 there were less than 4,400 students in the municipality. Six Kamenica schools have less than five students per class, while in six other schools there are less than 20 enrollments.

He added that after meeting education experts, municipal leadership reached the conclusion that there is no qualitative education in classes with less than 20 students, and this also harms students in terms of socialization, greater competition and other spheres of development.

In its meeting held on 27 May, the Central Election Commission rejected Kastrati’s request for the referendum on education reforms.

Citizen Goran Maksimovic said that the sewage system issue in a Kamenica neighborhoods could not be resolved by many mayors before Kastrati. He further added that freedom of movement in this neighborhood is mostly restricted by the lack of a sewage system, being that wastewater and sewage often finds its way above ground.

Further, Maksimovic asked whether any works are being done to the border customs point in Tugjec, based on the agreement signed with Medvegja municipality.

Kastrati explained that there are efforts to establish a common economic area between two municipalities, Kamenica and Ranillug, and the agreement on wastewater treatment is being discussed by three municipalities: Kamenica, Ranillug and Bujanoc.