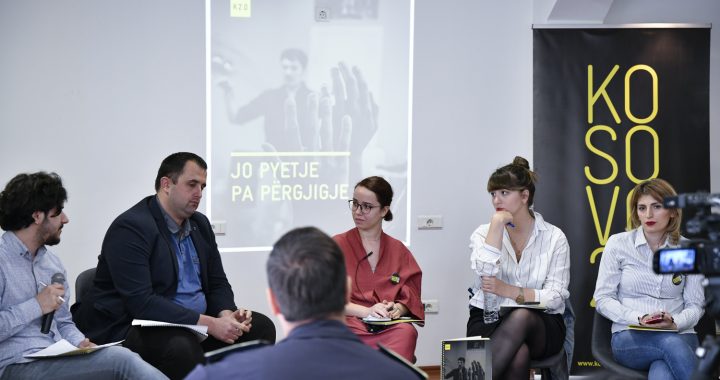 ‘No questions without answers,’ demand journalists

On World Press Freedom Day, journalists call for more open and honest lines of communication between Kosovo’s state institutions and its media on Friday.

Aurela Kadriu, the author of the report, presented the findings of their communication monitoring report, named ‘No Questions without Answers.’

According to Kadriu, the monitoring activity provided analysis of the press conferences organized by public institutions such as the Prime Minister’s Office, President’s Office, the Chairmanship of the Kosovo Assembly, the State Prosecutor Office and Kosovo Police Press Office from October 2018 to February 2019.

The report monitored the government’s communication with journalists through social media and email as well as press conferences, providing an evaluation of the quality of correspondence and issuing recommendations to improve the relationship between the media and public agencies.

Panelist Besa Luci, editor-in-chief of Kosovo 2.0, said that the monitoring project will continue.

“Our plan is not to end this monitoring campaign, but to use this data to hold a mirror up to the different institutions concerning their communication,” she said.

“Sometimes institutions give you a response, and they know that they are not actually answering the question, but simply want to fulfill the obligation to provide an answer,” said Ramaj.

Ramaj also spoke about the risks the media landscape faces when politicians and certain journalists have close or special relationships.

“News agencies are putting journalism at risk,” she said. “Some news agencies have agreements with ministries where they even take money from them [ministries]. Some of our more serious agencies sometimes are republishing the news that these agencies publish.”

Taulant Osmani, a journalist at BIRN Kosovo, said that officials in the offices of the president, the prime minister and the Kosovo Assembly consistently fail to respond to information requests for journalists, explaining that answers can take anywhere from three days to three weeks to arrive.

“In these four years working as journalist, I do not remember a single case when the president’s office answered our questions,” said Osmani. “I may have sent more than 100 emails. Often I send emails just because I have to, even though it is a pointless exercise.”

Osmani denounced the Kosovo president’s frequent verbal attacks aimed at members of the media, repeatedly calling journalists “liars.” According to Osmani, Thaci hailing journalists as liars when reporting on the president’s border correction issues is ironic. “President Thaci now denied that he ever promoted the border correction idea although we have found in many instances him promoting the idea,” he said.

For Osmani, public institutions only organize press conferences when it is convenient for the officials that represent them, including the president himself.

“We conducted research at [BIRN’s TV program] Jeta Ne Kosove, and we discovered that in the first two years of Thaci’s presidency, the office of the president held only four press conferences,” he said. “But after the border correction issue began, in the space of five months, the president called 18.”

Kreshnik Gashi, managing editor at BIRN, said the we should not be surprised by politicians that govern the country, trying uphold different groups of interests, when they attempt to avoid giving information that is not convenient for them.

Gashi said that journalists should persistently ask questions that are a matter of public interest.

“We cannot remember the last time our prime minister spoke about the state of our economy, education, healthcare, our culture, because all the time we [journalists] are dealing with the new crises they [politicians] create,” said Gashi.

“They announce intervention in the north of Kosovo by Police, introduce tariffs to Serbian goods, invent fictitious debates, and journalists are just following this agenda, issues that don’t even matter for our citizens,” he continued.

Gashi insisted that because of these political distraction mechanisms, journalists are repeating themselves when posing questions to politicians in an attempt to receive answers in the public interest.

“Today, we don’t know how many states have recognized Kosovo’s sovereignty,” he continued. “If you ask the prime minister, he doesn’t know, and if you ask the foreign affairs minister he will provide different numbers.”

“If you ask the prime minister about a deputy minister that works for him, he won’t even know that he hired him.”

In April, Reporter Without Borders, RSF, published their international press freedom index, ranking Kosovo 75th out of 180 countries monitored in the index, which analyzes levels of censorship and freedom of media across the globe.

According to RSF, freedom for journalists and the media in Kosovo has steadily improved since 2016, noting that in 2019, journalists “do not hesitate to criticize” government policies and lack of political transparency, and that direct political links within Kosovo’s media landscape are diminishing.