Kosovo Police engaged in the illegal import of goods in north Kosovo in the aftermath of the introduction of the tariff on Serbian products, an eight-month-long BIRN investigation finds.

Near Leposavic in the north of Kosovo, a liter of petrol costs 88 cents. Elsewhere in Kosovo, the price can be as high as 1.13 euros. This difference in price is a result of contraband goods entering to the north from Serbia, BIRN discovered, following an investigation into smuggling networks that have been operating across the borders for more than a decade.

Despite the 100 per cent tariff against goods coming from Serbia that was introduced in November 2018 by the Kosovo Government, finding fresh dairy products produced in Serbia in the supermarkets of Leposavic is not a problem.

“A smuggling network has been built throughout this area,” said one police officer working in the north, who agreed to collaborate anonymously with the BIRN team, revealing the smuggling routes and how they operate.

“To carry out smuggling, you need connections with a man driving a grey [Volkswagen] Passat,” he told BIRN.

According to him, the driver is related to a superior officer in the local police, and his role is to accompany the trucks carrying goods to the road near the village of Kushtove in South Mitrovica, ensuring that the police will not halt the vehicles for inspection provided they pay a fee.

The car was filmed several times by the BIRN team, driving behind trucks that were carrying contraband.

Over the course of eight months, BIRN set up cameras across known routes where goods were being transported, and talked to members of the smuggling networks that pay money to officers in the north in order to secure safe passage for contraband.

The town of Zubin Potok is located 50 kilometers from Leposavic in northern Kosovo, on the road that leads to the border crossing point at Brnjak, near the Gazivoda Lake.

In Zubin Potok, smuggling takes place only a few hundred meters away from the border crossing point. For 24 hours, as BIRN’s cameras filmed the route, more than 10 trucks passed without being stopped or hindered by the authorities.

Many different kinds of goods, including cattle, are smuggled into the area.

According to BIRN’s sources, there are two groups of Albanians, one from Kushtove and the other from Vushtrri, who have established links with Zubin Potok smugglers in order to import cattle.

In Serbia, the price of meat is lower than in Kosovo, and cattle are bought for a cheap price in the town of Sjenica in southwestern Serbia.

Serbian smuggling groups then have the task of bringing the cattle to Zubin Potok. Nearby a furniture factory outside the town, cattle are delivered to the Albanian smugglers. 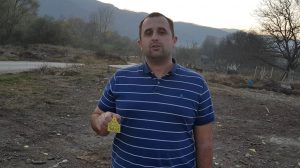 For all cattle imported legally into Kosovo, an ear tag registration system is used to verify the cow’s origin. Albanian smugglers are organized: after cattle are slaughtered in Kosovo, they collect the eartags of the dead cattle and reuse them on the cows brought across the border from Serbia, successfully covering their tracks.

When the BIRN team visited the area where the groups exchange the cattle, there were two abandoned trucks parked, one with a Novi Pazar license plate and the other with plates that, according to data obtained from the Kosovo Police database, are from the village of Kushtove.

The trucks, one of which was filled with cattle, were abandoned because the group have lookouts along the route to alert them of oncoming vehicles.

A police car that does not stop to inspect trucks moving contraband was filmed nearby.

The profit generated by smuggling goods from the north of Kosovo is estimated to be in the millions, and the Kosovo Government continues to tolerate police ties with smuggling.

In their reply to BIRN, Kosovo Police said that they are aware of illegal routes for smugglers operating in the north, but did not explain why there were no measures in place to stop the widespread phenomena in the north of Kosovo.

Since Kosovo declared independence in 2008, four municipalities in the north of Kosovo, Leposavic, Zubin Potok, Zvecan and North Mitrovica, have remained outside the full supervision of the law of the Republic of Kosovo as the police were unable to exercise control over the areas.

On February 18, in response to the government’s declaration of independence, violence erupted in north Kosovo, with people in masks burning two border crossing points to the ground.

In July 2011, the Kosovo Government sent special police units to Jarinje and Bernjak in an effort to take control of the two checkpoints that connect Kosovo and Serbia, which were the principal routes for illegal goods coming into Kosovo.

Jarinje and Bernjak were under the control of plain clothed police officers that were receiving salaries from the Serbian government at the time. 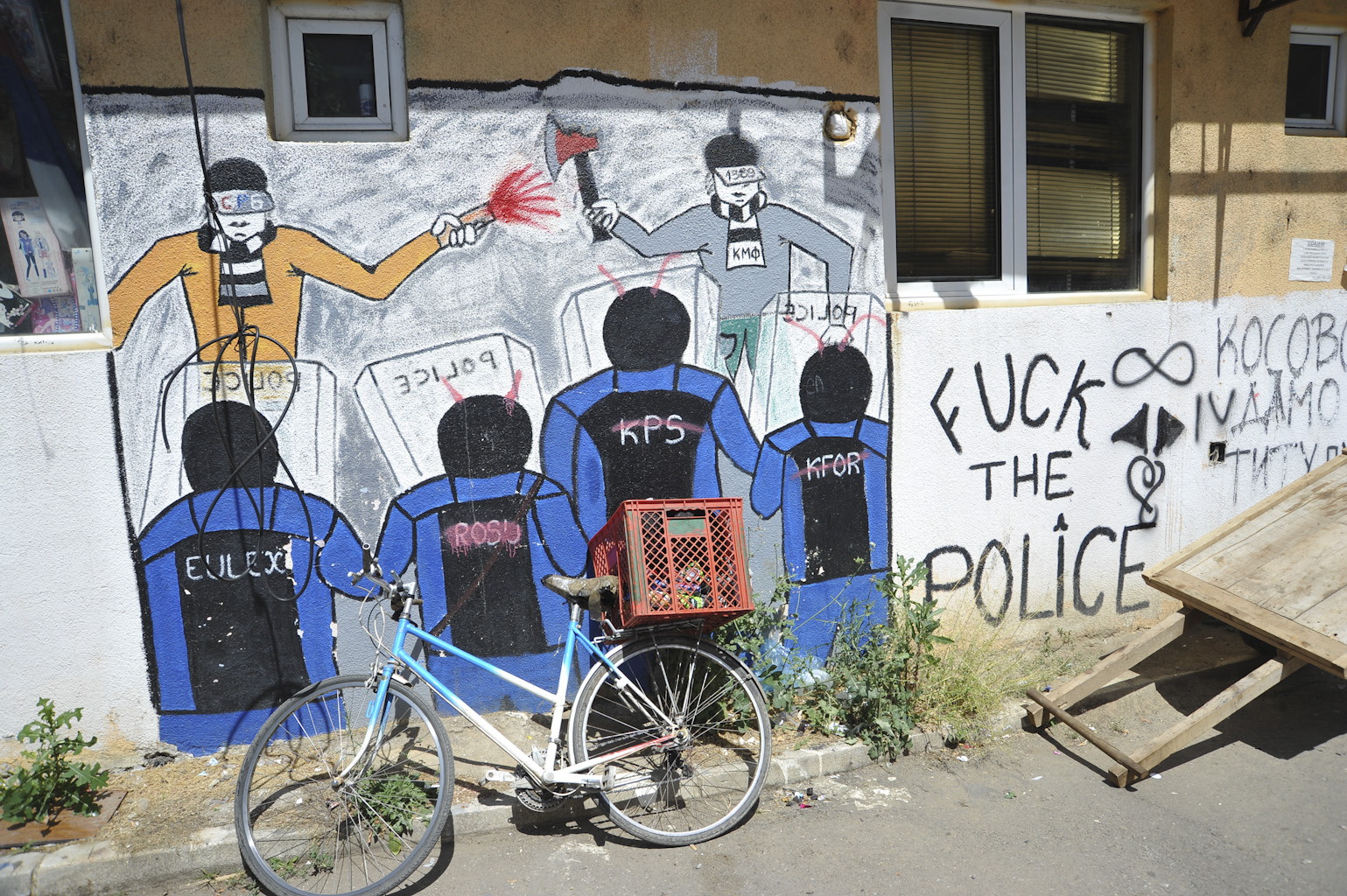 Whistleblowers in contact with BIRN are tired of making these payments, they said, and are unhappy with the growing cost of payments that must be made to the police.

“We have the phone number of a shift leader, we contact him and he tells us where the open routes are,” said one of the smugglers, who agreed to talk to BIRN and explain how the network operates.

There are two illegal routes in the Leposavic area, he said. The police’s shift leader dispatches a patrol along one route only, leaving the other route free to transport contraband unhindered.

Police officers have created a system of payment that enables them to avoid direct contact with smugglers.

“Once we finish the transportation, we have to hand over the money at grocery stores or petrol stations, and then from there, the police that take that money let us through,” the smuggler said.

The amount, according to him, ranges from 50 euros per car to 200 euros for large trucks, depending on what is being transported. There are over 150 trucks in the area that bribe police on a monthly basis.

One of the two illegal routes leading to Serbia is a road named Sharpej, a few hundred meters from the border crossing point of Jarinje. The lights of smuggling trucks can be seen from Jarinje with no problem.

BIRN set up cameras that filmed transportation in the area for 24 hours.

In the space of one night along the Sharpej road, the camera filmed over 20 vehicles illegally crossing the border with Serbia. 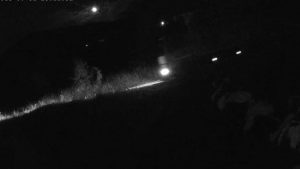 That night, according to BIRN’s whistleblower, the road was free for contraband to pass.

The whistleblowers mentioned two places where payments for the police should be delivered in order to ensure safe passage: a petrol station on the right side of the Leposavic-Zubin Potok road, and a supermarket on the same street.

In order to confirm that the police has been accepting payments from the people transporting the goods from Serbia, using hidden cameras, the BIRN team successfully delivered money to the people working at the gas station.

BIRN’s investigative team paid 30 euros at the gas station and gave another 30 euros to individuals working at the supermarket. According to the whistleblowers, the message ‘money for Police’ or ‘money for Shpiki’ is all that needs to be communicated, followed by payment,  instructions that BIRN followed to the letter.

A few days later, BIRN made a third payment in a different location, and were told that they could “hit the road” freely after the payment was completed. 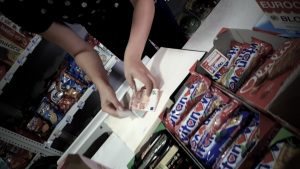 It was impossible for BIRN to track the journey of the money from the premises but, according to the smugglers, it goes to the pockets of local police officers.

“The police officers have made a lot of money, bought flats in Belgrade, good cars here and properties in the Kopaonik area,” the smuggler said.

For him, the fight against the people involved in these networks is dangerous. Police in the north who cooperate with their counterparts in Prishtina are considered to be traitors, he said, leaving room for police to continue to sustain the practice with impunity.

Since the integration of Serb parallel structures, only the Kosovo Police Inspectorate can investigate corrupt officers in the area.

Kosovo Police said to BIRN that it is aware of illegal routes, but their closure falls under the responsibility of KFOR.

According to BIRN’s whistleblower, efforts to contact authorities outside of the north have been fruitless, pointing to a phenomenon that goes beyond a small, isolated network of smugglers in the north.

“We have tried several times to alert Prishtina as to what is happening, but without any result. Sometimes, when we make the payments, it is said that this money goes to Prishtina,” the smuggler said.

‘No questions without answers,’ demand journalists