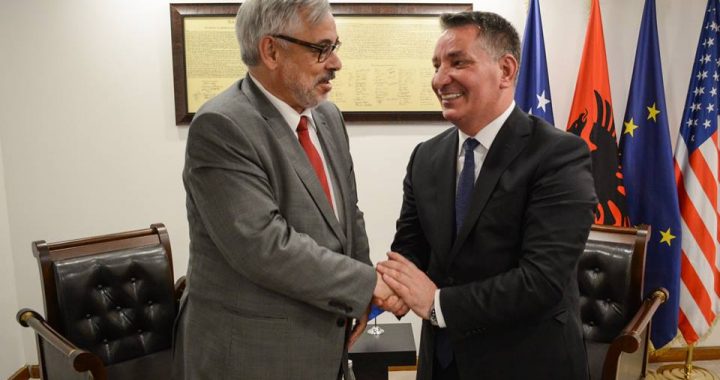 Minister of Infrastructure Pal Lekaj came under fire on Friday for supporting the dismissal of Swiss Ambassador Jean-Hubert Lebet, who accused the Kosovo government of abusing its budget to pay fake veterans.

A statement made on Thursday by the Swiss Ambassador to Kosovo Jean-Hubert Lebet sparked harsh reactions from Kosovo political officials as well as from leading embassies in the country, leading Minister of Infrastructure Pal Lekaj to support his dismissal and request that the Swiss embassy provide explanation of the allegations made.

“It is not normal that Kosovo has money and abuses it, especially by paying for fake veterans while others invest in essential projects for citizens,” said Lebet during the inauguration of a water supply system in Skenderaj.

Numerous allegations that the Kosovo government has inflated the numbers of Kosovo citizens that fought in the war have been made by NGOs and war veterans associations, citing errors and false testimonies in the verification process that entitles veterans to a state pension.

Minister Lekaj said on Thursday that the Swiss ambassador’s claims warranted his dismissal, provoking a chain of reactions mostly in support of Ambassador Lebet’s statement.

Lekaj said that Lebet would already have been dismissed if Lekaj was capable of making such a decision on television channel T7 following the ambassador’s comments.

“An ambassador, for what he said (since I do not want to judge an ambassador of another country) believe me, perhaps today he would be home,” Lekaj said. “…To call the veterans deceivers, publicly, in front of the citizens, believe me, had I made the decision, I would have sent him the letter [of dismissal] today.”

Lekaj met with Lebet on Friday after reactions to his statements went public. The Ministry of Infrastructure issued a press release detailing that the Swiss ambassador and the minister “cleared things between themselves,” and denied that Lekaj requested the dismissal of Swiss ambassador.

“At no time has Lekaj asked for the departure of the Swiss Ambassador to Kosovo, and even more, oppose a friend state of Kosovo,” reads the press release. “In his statement, Lekaj emphasized that there should be a letter explaining the allegations that veterans in Kosovo are fake, for which justice institutions have not yet made a decision.”

According to Lekaj, during Friday’s meeting, the Swiss ambassador has explained that his statement, made a day before, was extracted from its original context by the print media.

Lekaj thanked Switzerland for the continued assistance it provides to Prishtina, and that “Lebet emphasized how much he valued the sacrifice of war veterans of the Republic of Kosovo in the fight for freedom,” and “expressed regret over the misunderstanding.”

Lekaj’s initial statement on Thursday evoked negative reactions from the ambassadors of the US, the UK, France and Germany,  who backed the position of their Swiss counterpart.

“The Swiss ambassador said what we all think, it’s time for people who want Kosovo to work against crime and corruption wrote UK Ambassador Ruari O’Connell on his twitter account. “This is a difficult challenge, not just for Kosovo, and those who do this will have our support.”

According to German ambassador Christian Heldt, Lebet did not only talk about the fake veterans’ pensions, but about the way the government spends the money of Kosovo taxpayers.

“The questions about how the institutions relate to public money is legitimate, and we are doing what is for the benefit of all Kosovo citizens,” said Heldt.

Kosovo’s local politicians had mixed reactions to both the statements of Minister Lekaj and the Swiss ambassador.

The Speaker of the Kosovo’s Assembly, Kadri Veseli, attempted to negate Ambassador Lebet’s statement, and said that in Skenderaj, where the water supply was inaugurated, many verified veterans reside.

“Dear Ambassador, today in this country, where the inauguration of this great investment is taking place, there have been fighters who have been real KLA fighters. There are many heroes in this area, but there are people who also contribute to peace today,” said Veseli.

“Switzerland is a key partner of Kosovo. Switzerland played an enormous role in Kosovo state-building and development. I agree with Swiss Ambassador Jean-Hubert Lebet for his contribution to our countries’ strong friendship,” said Pacolli.

“It is unprecedented that a Kosovo government minister asks to dismiss an ambassador. And that of Switzerland, knowing the fact that 200 thousand citizens of Kosovo live and work there,” said Hoti.,

“The ambassador’s request for expenses accountability is a legitimate one,” he continued. “Only the dismissal of this minister may be sufficient as an apology for a friendly country like Switzerland.”

“The statement of Minister Lekaj, which calls to dismiss the Swiss Ambassador in Kosovo, besides being scandalous, is offensive to any willing country that contributes to the development of Kosovo and the well-being of its citizens,” reads the GLPS press release. “No minister of the Republic of Kosovo, or any other senior official, should question the sincerity of an ambassador of a friendly state.”

GLPS requested an apology from the Kosovo government, and appealed to the the government to make it clear to local officials the weight of such public statements.

GLPS further implored the government not to be passive in the face of scandals that damage Kosovo’s diplomatic relations of Kosovo with friendly states.