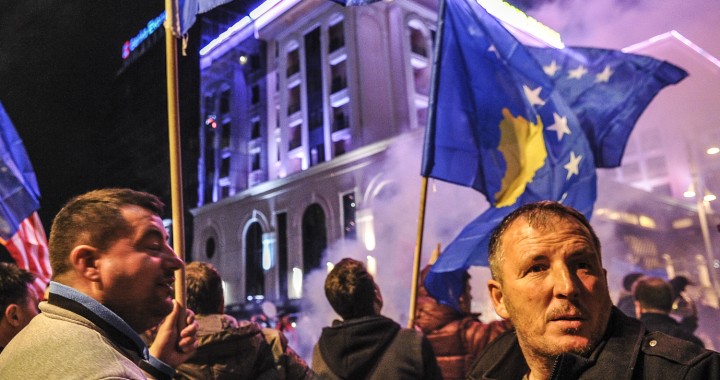 PDK fans gathered next to the party's HQ in the center of Prishtina during the 2017 elections. Photo: Atdhe Mulla.

A decade of shattered dreams

Kosovo’s statehood decennial offers little cause for celebration given the country’s current economic and political stagnation and incomplete state-building.

As Kosovo prepares to celebrate its first decade as an independent state, the enthusiasm that dominated in the country on the day of the declaration of independence has all but waned. Despite high hopes and expectations, the process of state-building and consolidation has proven excruciatingly difficult, thus exposing both the limits of local elites’ political and national vision as well as of international institutions and powers engaged in state-building in Kosovo.

The current political tableau in Kosovo is rather grey both in terms of the country’s internal consolidation and its international standing. Internally, although Kosovo has managed to maintain relative peace and stability, bar sporadic incidents and tensions, its overall progress has been rather limited. Consecutive early elections, political stalemates, deep political cleavages and use of violence for political gains have taken a heavy toll on the country’s democratization and institutional consolidation.

Although Kosovo has overall managed to build a solid track record of free and fair elections, it has yet to experience meaningful transfer of power. A combination of the electoral system, an established fragmented political scene and dubious legal interpretations by the country’s highest court have enabled a single party, the Democratic Party of Kosovo, PDK, to dominate in power and control of institutions for a decade. This, in turn, has made the fight against corruption, institutional independence and de-politicization of institutions all but futile. Instead of meaningful reform, PDK’s rotating political partners in government have mostly been satisfied with a share of power and its spoils.

Internal political quarrels, wide-spread corruption and institutional incapacity, as well as a lack of political vision and cross-party consensus, have all contributed to Kosovo’s unsatisfactory performance in internal state-building. Moreover, despite recurring rhetorical commitments to economic development and socio-political reform, Kosovo’s political agenda in the last decade has been dominated by the issue of its relations with the Serb minority and Serbia proper. Moreover, Kosovo agreed to engage in a technical dialogue, and later, a political dialogue with Serbia lacking any clear strategy of platform.

Consequently, Kosovo has accepted to negotiate with Serbia about its internal institutional and legal framework. Although Kosovo has managed to make some gains and advance its state-building agenda incrementally as a result of the dialogue — especially in terms of border management and integration of the Serb police and judiciary — the overall track record of the dialogue remains highly contested.

The Brussels dialogue has neither ensured a meaningful integration of Kosovo Serbs–especially the ones in northern Kosovo–into the country’s political and social system nor managed to dismantle and replace Serbia’s institutions in Kosovo. On the contrary, Serbia’s presence has been normalized and even strengthened in some parts of Kosovo. Importantly, Kosovo’s negotiating leadership has accepted an arrangement whereby Serbia speaks on behalf of Kosovo Serbs, thus leading to a total monopolization of the political life of Kosovo Serbs by the Belgrade government through the Srpska Lista, which in practice has acted as an extension of Serbia’s strongman and president Alexander Vucic in Kosovo.

Probably the biggest failure in Kosovo’s internal state-building is related to the inability of Kosovo’s institutions to build a wide societal and national consensus on issues of strategic importance for the country. As a result, Kosovo has proven incapable of appropriately addressing issues of crucial importance, such as the dialogue with Serbia, demarcation of the border with Montenegro, transformation of the Kosovo Security Force into an army, as well as the establishment/functioning of the ‘Special Court.’

Externally, Kosovo’s state-building record has been slightly better due to the strong support it has enjoyed from its key allies. Therefore, Kosovo has managed to overcome Serbia’s and Russia’s strong opposition to its international standing and gain recognition from more than half of the UN members, as well as become a member of various political, economic, financial and sportive institutions and organizations. The unsuccessful bids to join UNESCO and Interpol exposed both the limits of Kosovo’s international reach and an ever-changing and complex international political and diplomatic configuration that is unfavorable to small and contested states like Kosovo.

Undoubtedly, Kosovo’s biggest international failure is its relation to the EU. Despite being a product of the EU’s endeavor in external state-building, hosting the EU’s biggest ever mission abroad, and being engaged in EU-facilitated negotiations with Serbia, Kosovo’s relations with the EU remain confined within the EU’s formula of ‘creative ambiguity’ and ‘status neutrality.’ In spite of high hopes and bold promises regarding Kosovo’s “EU perspective” ever since the Thessaloniki Summit in 2003, Kosovo has been unable to advance its EU agenda significantly and build a  partnership with the EU.

Kosovo’s complex relationship with the EU is manifested in three distinctive yet interconnected areas. First, Kosovo has been incapable of building a sound and clear relationship with the EU that is based on mutual obligations and responsibilities that should have been the basis for the presence of EULEX. Therefore, we have a situation in which despite EULEX’s continuing presence beyond its original mandate and its limited success in the fields of rule of law and justice, Kosovo institutions are attributed all the responsibilities for the failures in these crucial fields. Moreover, Kosovo was made to swallow the ‘bitter pill’ of the ‘Special Court,’ as the fifth judicial instance (after the UNMIK courts, ICTY, Kosovo Courts and EULEX) that deals with alleged crimes committed by KLA members.

Second, even after a decade since Kosovo’s declaration of independence, the EU’s ‘status neutrality’ position remains unchanged. Kosovo has improved relations with some of its non-recognizers (Greece, Slovakia and Romania) but has been unable to gain full recognition from the reluctant EU members. From their side, EU institutions seem to have adapted to the post-2008 configuration of ‘creative ambiguity’ and have shown no intention of increasing pressure on the five non-recognizers to change their position.

Third, unlike Serbia, which has become a frontrunner (together with Montenegro) in the process of EU integration in large part due to the EU-facilitated dialogue, Kosovo has ensured only symbolic benefits. Save the Stabilization and Association Agreement, Kosovo’s progress in terms of EU integration has been very limited. It remains the only country west of Russia where citizens still require entry visas to the Schengen Zone. Most importantly, its prospects of EU membership remain faint and unclear. The recent EU Enlargement Strategy has clearly cemented Kosovo’s outcast status in the Western Balkans, not least due to Spain’s objections.

The EU’s inability to offer Kosovo a clear membership perspective and a timeline is a major blow for Kosovo that at the same time risks undermining two decades of EU involvement in reconstruction and state building in Kosovo and, worse, reigniting proponents of ‘alternative’ solutions, i.e. redrawing of borders and creation of ‘greater’ ethnic states in the region. The current EU-Kosovo conundrum is, above all, a result of incompetent and improvised leadership in both Kosovo and the EU.

In addition to multiple failures and missed opportunities, the tenth anniversary finds Kosovo in an absurd and up-to-now unimaginable situation of political and diplomatic rows with its main external supporters as a result of the attempt by the current governing coalition to repeal the law on the ‘Special Court.’ Frustrated by their inability to find a solution to the key political issues that have brought about the current political stagnation, and lacking any creative ideas and vision about economic progress and political reform, the current ruling elites decided to turn against the country’s benefactors, only then to abandon their efforts following a harsh reaction from the Quint States.

Both the international community and local actors have failed to display an overarching vision about the future of the country, instead focusing on short term goals of political stability. The dominant ‘stability paradigm’ applied by international actors has benefited local elites, which have never shied away from acting as spoilers to maximise their political role and capital, at the expense of democratization and a bottom-up approach to state-building. The end result is a diminished type of state and democracy that guarantees neither full civic rights and inter-ethnic cooperation nor socio-economic wellbeing and prosperity.

Inevitably, this in turn has contributed to a growing sense of political apathy in the country and even a sense of disillusionment with independence and the state itself. Increasing abstention from voting and a slow but constant process of regular and irregular migration of young (and mostly educated) people, who seem to have ceased to believe in change, perhaps best exemplifies the widespread disillusionment of post-independence Kosovo.

In sum, Kosovo’s statehood decennial offers little cause for celebration given the country’s current economic and political stagnation and incomplete state-building. However, more than anything else, Kosovo’s modest track record in state-building and overall socio-economic development, in spite of overwhelming popular support for independence and statehood as well as external assistance, attests to the fact that state-building is a daunting task, and to make dreams turn into reality, it takes an awful lot of determination, dedication, vision, and effort.

Today, Kosovo’s main threat does not come any more from states that contest its statehood. Rather, it comes from the shattered dreams and diminished hopes of its own young people who seem to doubt the very viability of a Kosovar state that guarantees prosperity and well-being. Therefore, more than anything else, the country’s future is threatened by a rapidly growing sense of political apathy and powerlessness.