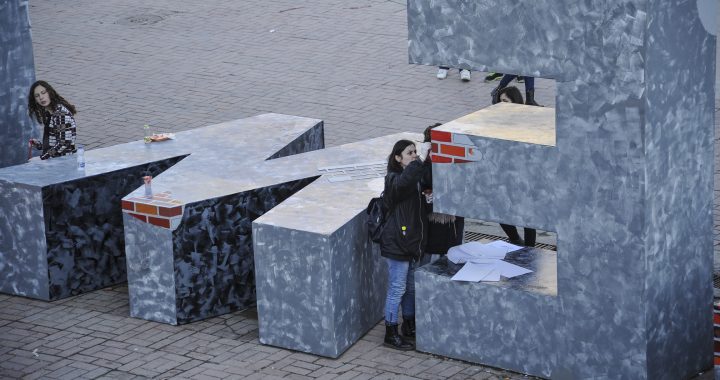 Youth painting the Newborn monument in central Prishtina, in preparation of the ninth anniversary of Kosovo's indepenence in 2017. | Photo: Atdhe Mulla.

The sow that eats her farrow

Ten years later, most Kosovars are not free of all the things—poverty, corruption, isolation, lack of education and health care—that had made life miserable in pre-independence days.

In James Joyce’s A Portrait of the Artist as a Young Man, the novel’s hero, Stephen Dedalus, is taking a walk one evening with his college friend, Davin. The two are immersed in a rather long conversation on national identity, culture, and Ireland—about which Davin has strong feelings. Stephen, on the other hand, sounds disillusioned: “When the soul of a man is born in this country,” he says, “there are nets flung at it to hold it back from flight. You talk to me of nationality, language, religion. I shall try to fly by those nets.” Stephen’s rhetorical outburst seems to make Davin uncomfortable and an awkward silence ensues before his friend follows up: “‘Do you know what Ireland is?’ asked Stephen with cold violence. ‘Ireland is the old sow that eats her farrow.’”

This memorable dialogue, as distant as it may seem from the topic at hand, came to my mind when I was asked to reflect on Kosovo’s tenth anniversary of independence. Try as I might to write from a different angle, taking stock of this last decade for the new country by looking at more standard indicators of stagnation, progress, or regress, I couldn’t shake off the dialogue and the way it related to how I have come to see Kosovo and the people who have been in charge of leading it over these trying and formative years.

For, it is true, we can talk about the country’s tribal politics, its unbreathable air, feeble economy, nonexistent health care, embarrassing education—we can talk and enumerate all these bleeding wounds, but if there is one tragedy that encompases everything in Kosovo’s first lost decade, it is the youth. The country’s single most important intrinsic resource (as Kosovo politicians love to remind every foreigner they meet), its greatest generation ever, has been let down, ignored, betrayed, squandered over empty sloganeering and boastful political bluster that has deepened with each passing year.

It seems as if one has listened to a million times how Kosovo’s politicians have repeatedly beaten on the slogan that Kosovo has the youngest population in the continent, that this youthful spirit was what defined the new country, its soul, its energy, its opportunities, and the bright future that lay ahead. Never—over the course of many years I worked with them in different capacities—never did I witness a meaningful reflection or even a half-baked conversation anchored in the bitter reality of Kosovo’s youth. Never did it occur to these politicians clad in fine suits that yes, they were in fact presiding over a young country, but a country with the most uneducated and undereducated youth in Europe.

The cringing ‘our country may be poor but has the youngest population in Europe’ became a defining hallmark for the typical, over-eager Kosovo politician missing the simple test of irony in that statement, while trying to mask the raging personal insecurities that underlined this boastful attitude. On a more practical level, there was always something painfully ignorant to crow about this raw measure in a weak country such as Kosovo when two decades of research had shown that a bulging and idle youth in a poor State is no asset, but a cause for social and political unrest, a phenomenon that drives young people to crime, immigration, and even terrorism.

But Kosovo’s politicians missed all that.

They missed, ignored, or were not dimly aware of undertaking the monumental task to build a country from scratch. For if they’d made an effort to understand this burden, they’d see that Kosovo’s youthful population was little more than an uneducated and purposeless drifting mass—a classic case for alarm and panic rather than a badge of pride. Year after year as more than 30,000 young, undereducated, unqualified, and isolated Kosovars reached their working age, their politicians plundered the public purse on dubious enterprises and projects whether that meant reaching for the ends of earth with pretentious and wasteful diplomacy, or building gleaming highways that led nowhere and brought back nothing but empty hopes of reaching faraway destinations.

It was somewhat of a shock then to these politicians that the tragedy of Kosovo’s vaunted youth was confirmed by the OECD’s PISA 2015 results— that to their shame, their young country had nothing to show for but a rotted education system peopled with poorly-skilled teachers and an untold number of functionally illiterate children. The country’s brightest and most promising generation—these kids that Kosovo’s politicians boasted about wherever they went, were languishing in the margins of the continent, lost and hardly able to read or write. Their country, or more appropriately all those chest-thumping demagogues in charge of it, had flung the net over these kids holding back their souls from flying. The children had been betrayed, embarrassed in front of the whole world. Their country had become like Stephen’s Ireland: the sow had eaten her farrow.

This, then, is Kosovo in its first decade of so-called independence, which people have a right to question and shun its significance because most Kosovars are not independent and free of all the things—poverty, corruption, isolation, lack of education and health care—that had made life miserable in pre-independence days. Little has changed where it matters most. The pigheaded government ignorance, the criminal avarice and squandering of resources— all this underlines Kosovo’s deepest tragedy, which is that an entire generation has been lost. Vulnerable teenagers of ten or fifteen years ago have now become drifting, resenting adults, many of whom see bleak prospects of having a shot at a decent life. Their pretty little country on which they pinned their hopes during their most formative years has interred their dreams and ambitions.

No wonder then that disheartening survey results show that over half of the population wish they could quit the place—in fact many thousands have already done just that.They pick up whenever they can and flee, disappear, crawling through hostile borders trying to get as far away as possible from the new country that has exhausted their energies and quenched their dreams. You talk to me of patriotism and country!