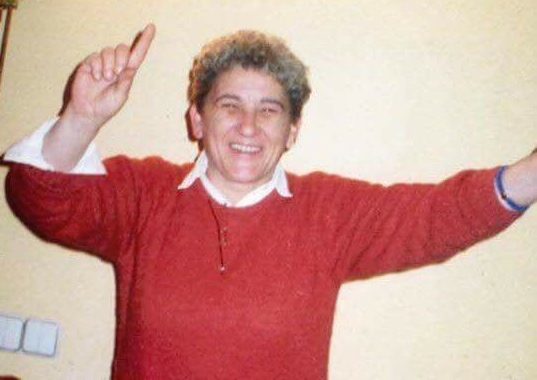 In memory of Antonella Giorgioni, beloved restaurateur and feminist, friends organize a charity dinner to support victims of domestic abuse and trafficking.

The restaurant Il Passatore was known for two things: the only fresh homemade pasta in Prishtina, and its vivacious owner and head chef, Antonella Giorgioni. An Italian who travelled around the world learning to make beautiful food, she spent the last 17 years of her life in Prishtina running her restaurant in Taukbashqe, and leaves behind fond memories of her activism and cooking with those close to her.

“Antonella was a passionate feminist,” said Bronwyn Jones, an organizer of tonight’s fundraiser pop-up restaurant at Beergarden Pub in Prishtina. “To her, feminism is the freedom to make your own choices, have your own career, and do your own thing.”

The pop-up restaurant is raising money in response to funding issues and the closure of  domestic violence support shelters across Kosovo in December. Allocation of emergency funds from the Ministry of Labor and Social Welfare allowed the shelters to reopen in January, but Peja-based Operacioni i Mekembjes, which the charity dinner will support with its proceeds, is the only organization in Kosovo that supports women and children who have nowhere else to turn once they must leave the shelters.

Jones and her two co-organizers Gzimi Ukic and Iain Lewis believe that Giorgioni would be thrilled to have this fundraiser for the NGO.

“Antonella should be an icon for young women here, and international people who come to Kosovo, too. They should take note of what she achieved, how she helped people in her own way, how she never took advantage of people. She was truly loved,” said Jones.

One of the families she helped the most was that of Ukic, who arrived in Prishtina from Serbia in 2000. Giorgioni employed his entire family, with Ukic working front of house, and teaching his mother how to cook. Il Passatore closed in 2016 when Giorgioni passed away.

“I was so close to Antonella,” said Ukic. “She taught me and my mother everything and gave us jobs, even though we didn’t know anything about running a restaurant.”

Giorgioni came to Kosovo after the end of the war, having spent eight years working in Tirana, Albania.

“She spent a lot of her time and energy here getting kids to Italy, for operations or healthcare. A lot of people were saved by her. She didn’t have much money, but everything she had went to helping people,” said Ukic.

“She was a force of nature at the embassies, getting these kids their visas, there was no way they could have said no to her,” Jones laughed.

Ukic and his mother will be preparing classic dishes from Il Passatore, including homemade bolognese and Giorgioni’s signature chocolate mousse.

“This is for Gzimi and his family as well. This is to remind everyone that even though Il Passatore is gone, they are still here, making the same delicious food,” said Jones, explaining that Ukic is now starting a catering business.

The money from the fundraiser will pay for housing and food for women and children in a warm, safe home, for medical and schooling costs, and for wages and training for the caregivers, explained Geni Johnson, the Director of NGO Operacioni i Mekembjes.

“Our two main projects are a family rehabilitation centre, and a vocational skills center for teenagers who have been identified as being at risk of violence and trafficking,” Johnson told Prishtina Insight, adding that the women and children who are referred to the NGO usually have nowhere else to turn.

Operacioni i Mekembjes works with survivors of domestic violence and trafficking for up to three years, offering families psychotherapy, counselling, art therapy, literacy and training in job and life skills.

“We support the participants with all the medical and legal care they need, as well as any ongoing support they require to become healthy members of society again,” explained Johnson. “It costs around three thousand euros to support one participant for one year with every material, medical and emotional need they have – as you can imagine, each woman or child that comes to our center comes from years of abuse and neglect with many needs for different types of support and care.”

“That’s why it’s good to throw events like these, it gets people talking and donating,” said Iain Lewis, owner of Beergarden Pub, and an organizer of tonight’s fundraiser.

“Antonella must have made a real impression on people, because after we shared the event, the NGO had to put up a donation page. There were so many people from different countries who obviously couldn’t come but wanted to donate to a charity being supported in her name.”