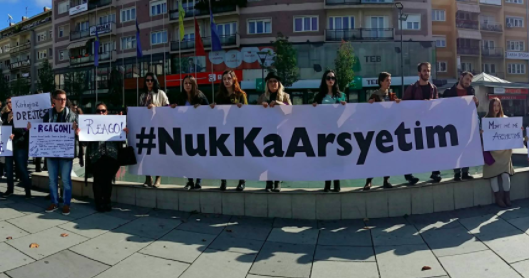 "There is no justification." | Photo courtesy of KWN.

Scrambling for funds, Kosovo centers that provide shelter to women and children fleeing from domestic abuse have been temporarily closed.

Government-funded safe houses for women and children fleeing domestic abuse have been forced to shut down for January and February this year due to lack of financial support.

Nazife Jonuzi, the director of the shelter in Gjilan, confirmed that the shelters are currently closed due to budgetary delays.

Meanwhile, the Minister for Labor and Social Welfare, Skender Recica, told BIRN reporters that he was not aware that the centers are not operating. However, he admitted that there have been some “difficulties” in allocating the budget to these shelters.

“I don’t have information saying that they have been closed, I’m not aware that such a thing happened. It is a fact that there have been delays in [allocating] their budget, the money has not yet been allocated for the 2018 budget, but it is not true that centers are not functioning. Not to my knowledge,” Minister Recica told BIRN.

The OSCE mission in Kosovo reacted, expressing their concern.

“We are very concerned that the shelters for the victims of domestic violence Kosovo-wide have been closed down due to lack of funds, especially when, on average, about a hundred domestic violence cases are reported to the Kosovo Police every month,” an OSCE spokesperson responded via email. “It is contrary to Kosovo’s continued institutional commitment to human rights.”

OSCE also emphasized that the shelters were “an example” of Kosovo institutions’ commitment to preventing domestic violence.

“Their closure is a step back, and takes away a means of protection from violence against those whom we should hold most dear: our family members,” the spokesperson added, saying that the mission calls for “urgent attention and action.”