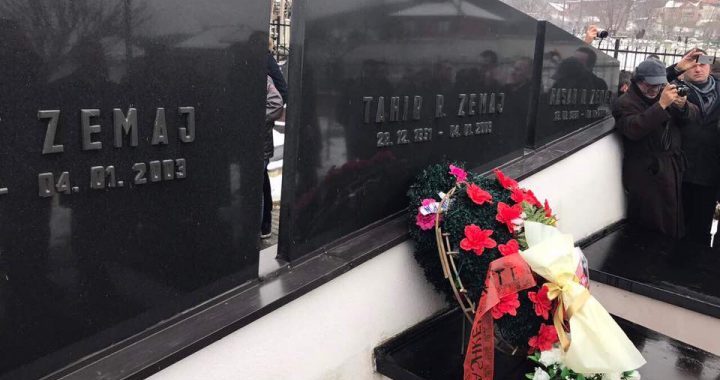 In an exclusive interview with Klan Kosova on Thursday evening, a protected witness of the Special Prosecution Office in Kosovo, Shkumbin Mehmeti, admitted to being a member of a criminal group that was behind some of the political assassinations in post-war Kosovo.

Mehmeti, who was convicted to 30 years in prison for the murder of two police officers in March 2004, talked about his participation in the criminal group, which according to him was responsible for the murders of well-known activists from the Democratic League of Kosovo, LDK, in the early 2000s.

According to Mehmeti, the group was established at the end of 2001 by Qerim and Ibrahim Kelmendi, and had “a special aim for the assassinations of LDK members and witnesses.”

Although Mehmeti accused multiple people of ordering or participating in various political assassinations, Klan Kosova chose to censure the name of an individual who Mehmeti accused of “supporting” the group’s activities.

Moderator Baton Haxhiu claimed that any censured names would be revealed at a later date, after the show contacted the accused.

Mehmeti also provided names of alleged killers involved in famous unsolved political assassinations, accusing Qerim and Ibrahim Kelmendi of ordering the assassination of the LDK MP Smajl Hajdaraj, and Tahir Zemaj, the commander of LDK’s armed wing. He also claimed that Agron Sylejmani, a fellow gang member who was killed during the shoot-out with police for which Mehmeti is in prison for, was responsible for the murder of Xhemajl Mustafa, one of the founders of LDK and a close advisor to Ibrahim Rugova.

On Friday, the families of Zemaj, Tolaj and Haklaj issued a joint statement expressing their shock and outrage.

“During his testimony, Mr. Mehmeti gave information… proving the motives that led to the order of these murders, and mentioned names that could have been involved in the perpetration of these crimes,” the statement read.

“Just as the entire public was shocked, our families were also shocked by the statements and allegations of this witness, who is at the same time convicted for crimes perpetrated as part of a criminal group,” continued the statement. “We’re deeply hurt that independently of allegations made by potential witnesses that would eventually lead to these murders–but also other politically motivated crimes in Kosovo–being solved, prosecutors have not done enough to fulfill their obligations in line with ethical and professional standards, leaving these cases to fate.”

The families demanded that the State Prosecutor take Mehmeti’s claims “very seriously” and bring the perpetrators of these crimes to justice.

One of the accused, Ibrahim Kelmendi, responded to the allegations, calling them slander on Gazeta Express.

“Shkumbin Mehmeti’s lies, seemingly ordered by someone, don’t impress me anymore, because they come up every time someone wants to obstruct my opposition and political unmasking of conspiratorial puppets,” he said, adding that there had been no “concrete, rational, or any other kind of reason” to order the murder of Smajl Hajdari, who was a valuable addition to the Kosovo Liberation Army. However, he admitted to “always having hated” Tahir Zemaj for being  “a Serbian puppet,” but emphasized that in the name of national interests, he would not support “plotted murders even for people who deserve to be killed.”

Clarification: Host Baton Haxhiu said that the journalist that interviewed Mehmeti received permission for the interview from the EULEX prosecutor.