A Kosovo NGO is fundraising for a crisis hotline, hoping to address a gap in the country’s mental health services left open despite a rise in suicide attempts since 2004.

Kosovo does not currently host a channel that provides real-time telephone counseling for mental health, so a local NGO is working to establish volunteer services for suicide prevention.

Although statistics show that the Eastern Mediterranean region has a lower suicide rate than the global rate, data from the Kosovo Police confirms a significant increase in suicide attempts in Kosovo in the past 14 years.

Bind Skeja, co-founder of the Center for Social Information and Improvement, QIPS, was struck when he found out about the lack of a hotline in Kosovo. This urged him to work towards establishing one in the country.

“When I returned to Kosovo from my studies in the United Kingdom, we started the NGO and intensively worked on the concept of the project,” he said.

Skeja, who graduated in experimental psychology from the University of York, said that QIPS is working together with the War Trauma Foundation, a Netherlands-based NGO, and that their biggest present challenge is funding.

“We are a young NGO, some of us are still getting our degrees, so, for instance, so we would not be a main contender for fund, although our project is well-thought-out. So the War Trauma Foundation is vouching for us through their wider-spread reputation,” Skeja said.

Skeja hopes that the hotline will become operational this year. And all calls will be fully anonymous. According to Skeja, they will try to build up to a 24/7 schedule in three years, but at first, the hotline will work from 6:00 pm to 2:00 am.

Our country lacks an established system that offers intensive care to people who attempt suicide or suffer from mental health issues. Aliriza Arenliu

The hotline will be staffed by volunteers – most likely students, because Skeja believes that this would be a good opportunity for them to learn new skills. However, he said that everybody who is willing to help can become a trained volunteer.

Later on, they also plan to include counselling in other languages. 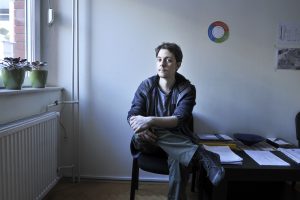 Aliriza Arenliu, a professor of psychology at the University of Prishtina whose PhD research focused on suicides attempts, said that Kosovo does have a relatively low suicide rate compared to the rest of the Balkans, yet domestic statistics show that the number of attempted suicides has risen.

Arenliu said that people who attempt suicide are not attended to adequately in the current healthcare system.

“Special attention needs to be paid to suicide attempts because the treatments [in Kosovo] are minimal. The cases are followed up with a psychiatric consultation, but from our experience, further follow-ups are rare, our country lacks an established system that offers intensive care to people who attempt suicide or suffer from mental health issues,” Arenliu said. “Naturally, a suicide hotline is helpful. Any initiative that tries to help people who are in that situation is beneficial.”

Between 2004 and 2007, people struggling with mental health issues could call a student-organized hotline. Vigan Behluli, a psychology graduate who co-founded the hotline through the Kosovar Association of Psychology Students, KOAPS, said that their initiative was necessary.

“It was a considerable success, a thing that was offered to a social group who weren’t necessarily unable to find someone else to talk, to ease themselves, but it was available when they needed it,” he said. “At one point we had 15 effective calls per day, and offering time, professional treatment and a caring connection is a rather big challenge, I think.”

Behluli said that one of the main reasons why they stopped operating was the lack of funding, yet underlined that a hotline is imperative.

“Our funds ran out, and at that time we could not generate funds to keep the project running,” Behluli said. “The necessity [for a hotline] is unavoidable. It may be true that people and youth in Kosovo are living without essential things, but if we are talking about a more integrated system of offering well-being regarding mental health, it is one of the key components that society owes its citizens.”

Arenliu agrees that funding is an issue for the maintenance of suicide hotlines.

Discussing suicide is still a taboo in Kosovo, and many people who talk about it are uninformed. Bind Skeja

“You can begin and have a good start, but people forget that [the funds] get used up after a year or two. Developing a mechanism for funds is quite a challenge,” Arenliu said.

Skeja said that whether or not the hotline becomes operational this year depends on if sufficient funds are raised.

Skeja said that the hotline, apart from its primary purpose, will help weaken preconceptions about suicide among people.

“Discussing suicide is still a taboo in Kosovo, and many people who talk about it are uninformed. So we also want to tackle this taboo, and disseminate correct information,” Skeja said. “To me, a hotline is essential.”