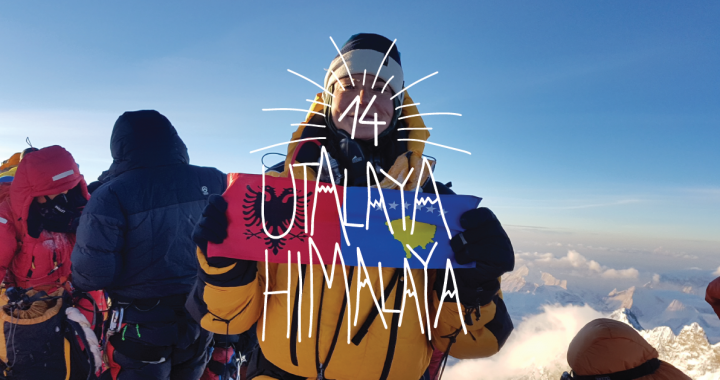 After her triumph over Mount Everest, Kosovo’s renowned mountaineer Uta Ibrahimi plans an expedition to climb 14 peaks in the Himalayas.

Uta Ibrahimi, an alpinist from Kosovo best known for being the first Albanian woman to climb Mount Everest, announced her plans for her next expedition that will feature climbing the 14 peaks of the Himalayas.

She also launched an online crowdfunding campaign to gather funds for the expedition.

In 2017, Uta Ibrahimi became the first Albanian woman to climb two of the highest peaks of the Himalayas — Everest and Manasulu.

She reached the Everest peak just hours before the Kosovo team made up of Arineta Mula and Nazmi Hasanramaj–who became the first expedition to plant the Kosovo flag–reached the peak.

The 14 Peaks of the Himalayas expedition is expected to last five years, ending in 2023. Ibrahimi plans to climb the 12 remaining peaks, accessed from Nepal, Pakistan, India, and China, climbing two peaks per year.

“K2 is regarded as the most dangerous peak in the world,” said Ibrahimi at a press conference on Tuesday. “I hope that I will successfully complete the climb and safely return to see you all here again.”

Beside the many difficulties that Ibrahimi and her team of volunteers will face during this expedition, the most urgent is securing the necessary funding for the equipment, airplane tickets, accommodation fees, and the expedition fees.

One portion of the funds will be collected with an online donation campaign through Kosova Ideas, a crowdfunding platform.

“Through this campaign we are asking people to donate, who from the comfort of their homes can give one euro, or two, or fifty, or a hundred euros — as much as they wish,” said Ibrahimi.

“Only when I returned from my Everest expedition did I understand its importance,” said Ibrahimi. “Not just for me, but importance for all Albanian people, because unfolding of our national and state flags made many people feel proud. Therefore, I understood that this is not just my expedition, but one for all of the Albanian people.”

Ibrahimi’s previous successes caught the hearts and minds of the public; she became a symbol of possibility not only for youth, but also for Kosovo’s potential as the youngest European country.

“As a woman mountaineer, I also want to raise awareness about gender issues in our society,” writes Ibrahimi in the expedition campaign brochure.

“Yes, it is possible for a Kosovo woman to climb the world’s highest peak — Mount Everest. I would like this expedition to serve as encouragement for many women, so they can climb rocks and reach high peaks.”

Fans can follow her adventures on the Utalaya blog, a clever portmanteau made up of Uta’s name and Himalayas.