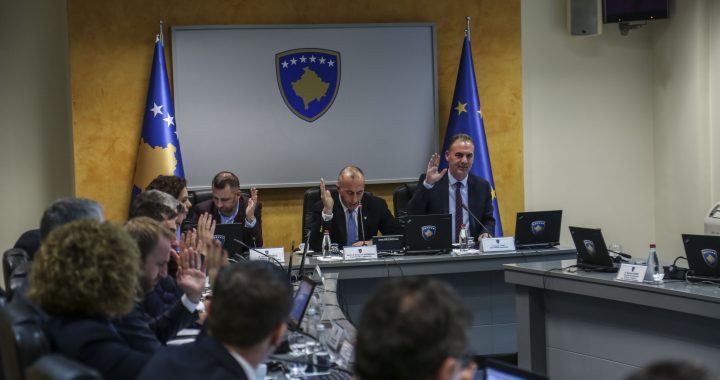 Kosovo government cabinet approving decisions during the meeting on January 12, 2018. | Photo courtesy of the Office of the Prime Minister.

Domestic violence shelters that shut down due to budgetary delays are expected to reopen by Monday; meanwhile, only the shelter in Gjakova remains to be functional.

On Friday, after reports that domestic violence shelters in Kosovo had been shut down for January and February due to budgetary delays, the Kosovo Government allocated 65,000 euros to the shelters at a cabinet meeting.

Skender Recica, the Minister of Labor and Social Welfare, proposed that the funds be allocated from the ministry’s budget in order to reopen nine shelters serving women and children fleeing domestic abuse, traumatized children, and victims of human trafficking.

The shelters are organized at a regional level and are licensed to offer social services, explained Recica when discussing the NGOs, which are funded by private donors and the government.

The Kosovo Government accepted the minister’s proposal to allocate emergency funding for January and February.

On Friday, Prishtina Insight reported that all shelters in Kosovo had been shut down due to a lack of funding, but it was later reported that the shelter in Gjakova has remained open yet without the ability to accept new residents.

Other shelters throughout Kosovo, however, closed their doors at the end of December, leaving their clients without shelter.

Ardita Bala, the director of the shelter in Peja, said that two of the seven women who had been sheltered in her center had to return home. She curtly responded that she did not know the whereabouts of the five other women.

Meanwhile, Emine Kabashi, director of the Mitrovica shelter, said the work of the center had been suspended.

“The shelter has suspended its work, and you should ask the Center for Social Work in Mitrovica about the whereabouts of the victims,” Kabashi said in a phone interview.

Meanwhile, Sakibe Doli, the director of the Gjakova shelter, said that the center remains open, but has not been able to take in new people since the shutdown.

“We haven’t admitted any new people because of the lack of financial support from the Ministry of Labor and Social Welfare,” said Doli.

After the allocation of emergency funds, the eight remaining shelters are expected to reopen by Monday.