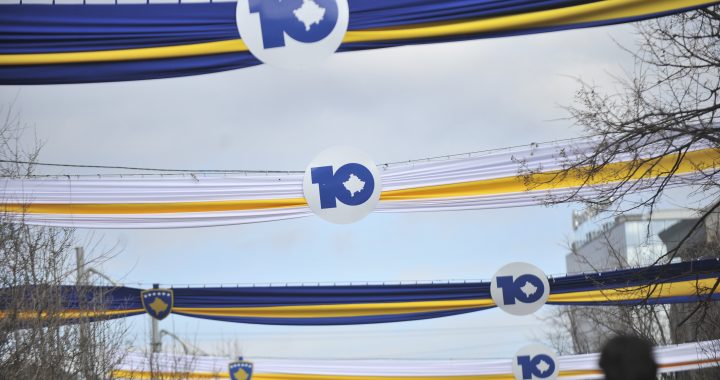 Small moments of victory for Kosovo

The first decade of Kosovo’s independence was filled with moments of the ground shifting beneath our feet -  easy to forget in our earthquake-prone country, but they restore our dignity nevertheless.

Kosovo is changing, even though our collective frustration makes it feel like nothing has moved forward. Last summer’s elections felt like a glacier slowly melting, the old power structures are wobbling, and it’s hard to see how long this government can survive the demarcation debacle or the Kosovo-Serbia dialogue.

Even though Kosovo stood by Ramush Haradinaj while he faced trial for war crimes in the Hague, in his new stint as Prime Minister, Kosovars jeered and condemned him for raising his own wages to “buy more ties and shirts,” as he put it. After that statement, he was greeted with hundreds of ties hung around the perimeter of Kosovo’s main government building.

In many ways the current situation feels like the same old tug of war between unhappy citizens and corrupt politicians. But we owe it to ourselves to take a breath and look back on how our landscape has, in fact, altered. The first decade of Kosovo’s independence was filled with other moments of the ground shifting beneath our feet, easy to forget in our earthquake-prone country:

Activists held a public Pride Parade in October 2017, which would have been impossible a few generations ago, let alone one so loud, so colourful and so unapologetic as Kosovo’s very first.

Feminist activism led to an increased prison sentence for Nebih Bytyci, Zejnepe Berisha’s murderer, and ensured that her name was not forgotten.

After years of politicking, survivors of wartime sexual violence can finally apply for social welfare payments as civilian victims of war – after ugly resistance in parliament and the physical assault of Nazlie Bala.

Prishtina’s toxic air finally made Kosovo’s environmental degradation real to some Kosovars for the first time. Following unrest and protest demanding clean air, the parliament approved a resolution after debating pollution, cars and our national reliance on coal-powered electricity.

In 2014, University of Prishtina students forced their corrupt rector, Ibrahim Gashi, to resign in disgrace. Although the mandate of the reform rector Ramadan Zejnullahu was short lived, in 2018 professors are being called out for plagiarizing and losing their titles too.

Roma MP Kujtim Pacaku stood up in parliament and demanded an apology from his Albanian colleagues for racist and derogatory comments made by PDK officials Adem Grabovci and Safete Hadergjonaj.

Yes, these moments are just moments, none of which have brought about permanent change. But we badly need them, if only to reaffirm our collective dignity and to imagine what kind of society we want to build – if not for ourselves, then for those who will come after us.

Could we, for example, imagine a national journey in which we are partners with our western allies, and not their subordinates? Kosovo’s isolation from the rest of the world isn’t an accident, it’s a political choice. Even though most member states of the EU have recognized our statehood, they don’t want us anywhere near their countries. That much is clear. Even beyond the issue of visa liberalization, Kosovars have paid a heavy human cost in the global backlash against migrants: we need to remember the lessons of the Tisa River tragedy, the forced deportation of Leonarda Dibrani, and the asylum crises of 2014 and 2015.

These lessons make it painfully clear that we are not welcome in the ‘European family,’ not in any real sense. Let’s grow up as a nation and accept that our international friends are not thinking about us. We are responsible for our collective fate. If you were to ask me, I don’t see much value in emulating a western world increasingly in love with borders, walls and the exclusion of peoples exactly like us. I ask, why can’t we envision something better than EU membership – like security, social welfare, and institutional legitimacy?

My second question is, who can lead us to that other place? Can we imagine what that person could look like? In 2014, I wrote a fake article on the election of Drita, Kosovo’s Prime Minister in the year 2050. She is everything our current leaders are not: humble, compassionate, and capable of sacrifice. That’s my vision. What’s yours?