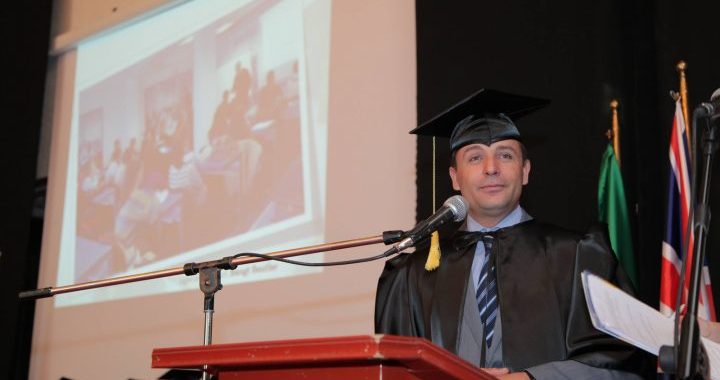 Mazrreku during a graduation ceremony of ISPE college. | Photo: Facebook.

The Faculty of Law at University of Bremen has decided to revoke the doctoral title of Avni Mazrreku, former head and council member of Kosovo private college ISPE.

The Council of the Faculty of Law at the University of Bremen in Germany has decided to revoke the doctoral title of Avni Mazrreku, former head of ISPE College.

The Council decision was taken after the alma mater of Mazrreku, a European studies expert and lecturer at ISPE College, made an inquiry into charges of plagiarism, BIRN discovered.

The inquiry, Lorenz Kahler, the dean of the Faculty of Law told BIRN, was initiated after German community-based network VorniPlag published an analysis of Mazrreku’s dissertation last November, concluding that large parts of the work contained irregular citations and outright copying.

The University started an inquiry immediately after, and on January 31 concluded its inquiry with a decision to revoke Mazrreku’s title, Kahler confirmed to BIRN via email.

“The faculty council has decided today [on January 31] to revoke the PhD title of Mr. Mazrreku. It takes some time to issue the formal decision from which so far no written version exists. Besides, the decision concerns private affairs so that it will not be published,” Kahler said.

Mazrreku defended his thesis, titled “European Integration and the Western Balkans,” in 2009, mentored by Professor Josef Falke, a professor of European legal policy at the University of Bremen. His second reader was Professor Hagen Lichtenberg, a professor of civil law at the same university.

Years later, Vroniplag, a crowd-sourced wiki that analyzes German doctoral theses for plagiarism, raised suspicions that parts of his thesis were plagiarized.

Vroniplag has analyzed over 150 academic theses from German universities, and has contributed to the revocations of degrees from high-profile figures such as MEP Jorgo Chatzimarkakis and former MEP Slivana Koch-Mehrin.

After this initial inquiry, the University of Bremen in Germany started an investigation into Mazrreku’s doctoral thesis.

“The suspicion that the PhD-thesis of Mr Mazrreku entails plagiarized parts was brought to our attention last year. As foreseen by our by-laws we immediately started an investigation led by the PhD-commission,” Kahler said.

Contacted by BIRN, Falke said that he received the information on August 16, 2017 through a letter sent by the coordinator of Vroniplag to the PhD commission of the Law Department at the University of Bremen.

After the university convened a committee to inquire into Mazrreku’s dissertation, Falke said he informed the committee members during a meeting on October 25, 2017 that “the provisional list of examples for plagiarism in the dissertation of Avni Mazrreku is only the tip of an iceberg.”

After the investigation by BIRN was published in Albanian on Kallxo.com, Mazrreku issued a reaction, saying that the article was incorrect and “serves certain agendas.” He said that he has not received a written decision about the revocation of his title, and as such did not consider it final.

“It’s a basic legal premise that there is no definitive decision before all means [to appeal it] have been exhausted,” Mazrreku wrote in an e-mail. Nevertheless, he promised to “cooperate openly and transparently during the whole process with all interested parties until the final decision.”

Falke said that the Law Department has approved new regulations for receiving a PhD. He said that a new clause was added to Article 22, which says that a PhD can only be revoked if it was granted on the basis of deception or serious, careless violation of good scientific practice. The Council of Division 6 decides on revocation based on the doctoral committee’s opinion, and the subject can comment before the decision is made.

He said that the Law Department has competency to make the final decision regarding Mazrreku’s case.

Falke is worried that his former student might be targeted for political reasons.

Falke also called himself a “victim” of the case.

“I cannot defend his systematic fraudulent behaviour (in an objective) sense and the severe violation of basic scientific standards. I myself am a ‘victim’ of this behavior as well as the Law Department, the University of Bremen and the scientific community,” he said.

Kahler said that the procedure of PhD revocation is not connected to any official punishment for supervisors.

“The procedure for a revocation of a PhD-title is not connected to a formal penalty for the PhD supervisors. Such a penalty is only possible if a supervisor knew or should have known that the thesis entails plagiarized parts. Regularly, he or she has to rely on the confirmation attached to each thesis that it is in total done by the author himself,” he said.

Falke said that he had not suspected systematic plagiarism or scientific irregularities in the dissertation.

Representatives from the Kosovo Accreditation Agency confirmed that Professor Falke and second reader Professor Lichtenberg were lecturers at the ISPE college, the latter also being part of the college council.

Although the Kosovo Accreditation Agency confirmed that both of the men were listed as lecturers in ISPE for academic programs in 2016, after being contacted by BIRN journalists regarding the case, Falke’s , Lichtenberg’s, and Mazrreku’s biographies were removed from the official website of ISPE.

Falke was seen in a promotional video for ISPE College on September 8, 2012, about three years after Mazrreku defended his thesis.