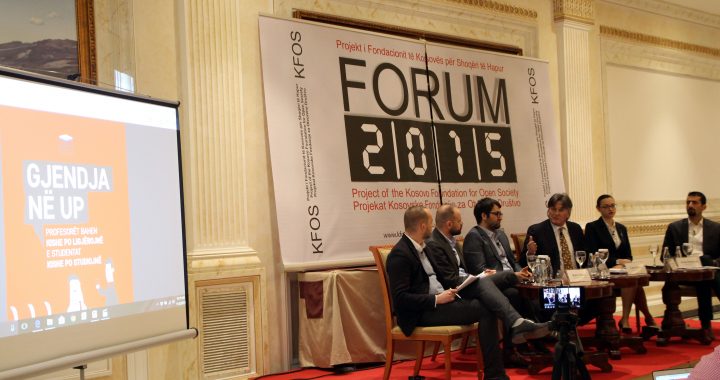 Coalition members discussing during the roundtable. | Photo: courtesy of KFOS.

An NGO coalition created out of concerns for academic standards and ethics at the University of Prishtina published six reports today raising issues ranging from politicization of the university’s faculty to plagiarism and fraud amongst students.

The Coalition for Integrity and Transparency at the University, KITU, was established seven months ago as a collaboration between various NGO groups, including EdGuard Institute, Kosova Education Center, Encompass Center, Sbunker, Center for Political Courage, ORCA, Admovere, COHU, D4D, and KFOS.

Today, issues raised by KITU researchers included a high student-professor ratio of 50 to 1 and the high numbers of students mentored by a single professor. Roundtable participants also discussed several problems regarding research, such as poor conditions of libraries and the lack of academic texts in Albanian language.

Researchers also presented findings on corrupt academic practices, such as professors publishing in dubious scientific journals, the buying and selling of theses, and political interference in the university.

COHU’s research identified about 50 professors at the University of Prishtina with direct links to politics, which results in a system of unmerited academic advancements, the researchers claim.

Admovere presented their summary of problems at the university, which includes a 2014 Steering Committee figure that 80 per cent of academic staff at the University of Prishtina have scientific titles and publications of no value.

Shkelzen Gashi of Admovere said that there is a lack of accountability measures for plagiarism.

“The greatest problem with plagiarism is that, even when it is identified, there are no penalties,” he said.

Meanwhile, COHU also published a report titled “Thesis Market” arguing that one of the reasons for the presence of plagiarism at the university could be the high number of students that many professors mentor for their bachelor’s and master’s theses, making it difficult to examine each of them in detail.

The report lists the Faculty of Economics and the Faculty of Philosophy as examples: during a two-year period, some professors in these faculties mentored over 130 bachelor’s theses and over 20 master’s theses.

Faton Berisha, the Prorector of University of Prishtina, defended the university’s position by saying that it has the necessary systems of checks and balances to prevent plagiarism of MA, PhD, and academic texts, but admitted that they may not always function the way they should.

A ready-written bachelor thesis could be bought for anywhere from 150 to 250 euros, according to COHU. Meanwhile, master’s theses go for about 200 to 300 euros .

“It is sufficient to search social networks or shopping websites to finds tens of possibilities to buy theses,” the Cohu report says.

Prorector Berisha used the term “contract cheating” to describe the phenomenon of students buying their theses, and said that it was fortunate that this phenomenon had just started in Kosovo and was in its infancy compared to the situation at English-speaking universities around the world.

Cases of “contract cheating” and plagiarism, according to Dukagjin Pupovci from the Kosova Education Center, would decrease if the professors spent more one-on-one time with the students to guide them through the process of how to write their theses, rather than focusing solely on when students defend their theses.

Kosovo lacks the legal framework for prosecuting criminal acts involving academic fraud, according to the COHU report, making it difficult to hold people accountable for cheating and plagiarism.

On the other hand, Rron Gjinovci, executive director of ORCA, praised Prorector Berisha’s contributions in the UP’s Senate to fight unmerited academic advancements.

“There were rapid improvements [at the UP] in regards to academic advancements. The current management was very helpful,” said Gjinovci. “Seventy cases of unmerited advancements have been prevented during the current administration.”