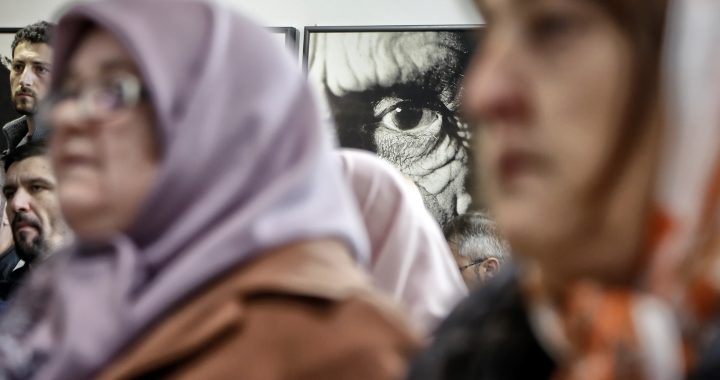 Bosnians watch a live broadcast of the trial of Ratko Mladic at the memorial center in Potocari, near Srebrenica. | Photo: AP Photo/Amel Emric.

An op-ed by Serbian human rights activist Milos Ciric published in today’s edition of Danas, prior to the UN-backed tribunal in The Hague convicting General Ratko Mladic of genocide.

Close your eyes and imagine a young Srebrenica native, Fatima Muhic. She is 22, has long brown, neatly combed hair beneath a silk hijab, a narrow and proud face. She is a Philosophy student in Sarajevo, the pride of her entire family. She is unobtrusive and funny, has lots of friends. On this golden morning, she sits in Bascarsija alone, going through her lecture notes. She enjoys the fresh air. She takes a deep breath, takes a sip of coffee and bites on the sweet rose-flavored Turkish delight. She takes a sip of cold water, looks at the foggy Sarajevo hills, and dreams of going to New York. She checks the time – time to go. She raises her hands to her forehead, runs her fingers around her face and tightens the hair underneath the hijab. She sends a message to her mom in Srebrenica, wishing her a good morning and tells her she loves them all. She gets up, puts her bag over her shoulder and passes through a group of tourists wearing a smile on her face, disappearing into the crowd. Do you see her? Now open your eyes.

Fatima was born in Potocari, one day after the Army of Republika Srpska marched into Srebrenica. Faced with unbearable heat, thousands of people were fleeing in panic from the Serb army – into the forests and hills to get as far as they could, towards Tuzla, into Potocari. That day, the Serbs understood very well the words stated in their commander’s statement, a statement which he gave the moment his filthy boot stepped foot in Srebrenica. They celebrated and sang deep into the night, while the bosses were preparing a mass slaughter, and while equipment from Serbia was being amassed for the weeks of their bloodbath. For the hunt on men and boys across forests, for commands like “Get on your knees!”, for lies like “Nothing will happen to you, feel free to come out.” For the diabolical laugh at the back of the heads of young men who, wet from sweat and urine, kneel unarmed in front of the Serb heroes, for the video recordings of their murders, for the thump a dead body makes when it hits the yellow-grassed and heavy Bosnian soil.

On July 11,  women, children, the elderly, and young men were fleeing towards the UN base. They did not know, nor could they know, that they were running into the waiting room of death, securing their place in a mass grave. Brave Hava, with her large belly, was also part of the stampede of terrified souls. She was afraid she would fall, that the crowd would flip her onto the scorching soil. During her night in Potocari, Hava gave birth in unimaginable conditions. The night was worse than the day. The scorching heat was suffocating thousands of people who were all sharing the awful shelter air. She gave birth to a girl.

At the same time, 120 kilometers from there, in stench-filled Belgrade, the gentlemen watched the evening news from their office chairs and listened to the General’s statement: “Here we are in a Serbian Srebrenica. The time has finally arrived to take vengeance against the Turks in this area.” The ladies were finishing their preparations for tomorrow’s slava, St. Peter’s Day. A week later, during Radio Television of Serbia’s evening news, the young voice of MP Aleksandar Vucic was heard from the Assembly lectern: “Kill one Serb, and we will kill a hundred Muslims.”

Thousands of Muslims had already been thrown into mass graves. When these were filled up, the bodies were torn to pieces and transferred to secondary graves, then repackaged and thrown into tertiary graves. Serbs had their hands full until the summer’s end. Who drove the plows? Who drove buses from Valjevo, Sabac, Uzice, buses which would later be used to transport people from Potocari to locations where they would be executed? Who lifted the bodies and threw them into the pits in Tomasica, Kozluk, Budak, Snagovo, Kamenica?

The commander of these murderers was ‘on the run’ for 16 years after the genocide, and was under the protection of our country. He was often seen in Belgrade, at the games, among various guests at parties. Then he disappeared. Today we know that, at least for some time, he was hiding in a military facility in Topcider. Who are Drazen and Dragan? These are the two military guards found dead on October 5, 2004 in the same facility. Our country and the media claim that it was a murder-homicide, while the guards were actually murdered because they saw ‘the Devil himself’ on that morning. At the time, the Minister of Defense was Boris Tadic.

The General was ‘found’ in 2011 in the village of Lazarevo, near Zrenjanin. He proudly stated his true name without any hesitation to the police. A bereaved Boris Tadic, Serbia’s then-President, informed the public that ‘the hero’ had been apprehended. The General  immediately asked to visit his daughter Ana’s grave, buried right at Topcider. Ana committed suicide in 1994 by firing a bullet into her head with her father’s gun. Rumors indicate that her father demanded he be the one to put makeup on her for the last time. Some rumors also indicate that he obstructed the investigation on the causes of her death. They say his daughter’s death hit him with such force that it made him change his ‘war strategy.’

Remember Fatima? Hava Muhic named her little girl in 2012 when the baby’s bones had been identified. They were tiny and mixed with the others. It was neither easy to find them, nor to establish whom they belonged to. Fatima is the youngest victim of the Srebrenica genocide. There are at least 8,371 victims, but Fatima lived the shortest during that hellish July night. Fatima, whom we today imagine passing with a smile on her face through Bascarsija, died on the same day of her birth. She will never see the hills of Sarajevo, nor have a sip of cold water. Her mother today watches the verdict of her child’s murderers, while her other murderers walk freely among us. Some of them are in power, some are in the opposition, some teach our children, some write our news, some of them lead our country.

The author is a human rights activist from Belgrade and an associate of School of Media Studies of The New School, New York.

The original article was published by the Serbian daily Danas.