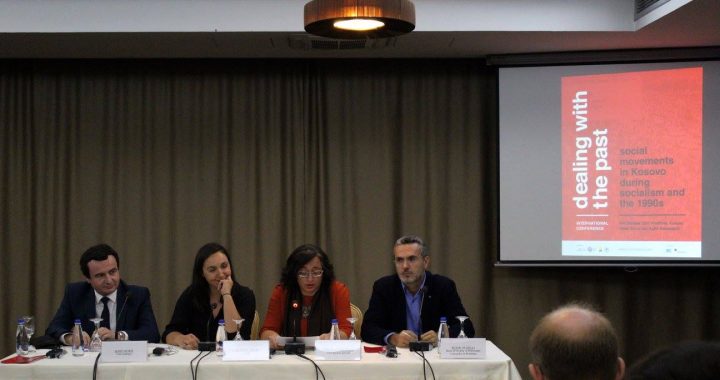 Former leaders of the University of Prishtina Student Union reminisce and provide details on the organization of the ‘97 student protests that have come to symbolize Kosovo's political awakening in the late 1990s.

Throughout the 1990s, Kosovo Albanians systematically and non-violently resisted the Milosevic regime through peaceful protests and organizing parallel health care, taxes, and schools held in private homes. But in autumn 1997, it appeared that the will and patience of Albanian students to continue attending school in the parallel system had run dry.

On October 1, the University of Prishtina’s Independent Student Union led students and professors by the thousands into the streets for what would be one of the most defining days of Kosovo’s recent history.

“What we did may be unimaginable for many young people today in the Balkans and the wider region,” said Mihane Salihu Bala, one of the organizers of the protest, at a panel, moderated by Garentina Kraja, to commemorate the 20th anniversary. “But it was easy for us to challenge the Milosevic regime, because we needed to survive.”

At Friday’s panel, Salihu Bala joined her fellow organizers from twenty years ago Albin Kurti and Bujar Dugolli as part of the international conference titled “Social Movements in Kosovo During Socialism and the 1990s,” organized in the capital this weekend.

The panelists recollected their experiences of segregation and the dismissal of Albanians from public institutions, including the University of Prishtina, during the Milosevic regime.

The protests are often described as centered on demanding the Milosevic regime to implement the 1996 Rugova-Milosevic agreement to allow Albanian students back into their school buildings. However, according to Dugolli, this was not entirely true.

“We weren’t protesting the non-implementation of the agreement, because in fact, we were opposed to the agreement. We knew that this agreement didn’t have to do with the university, but with an integrated system–merging our system with the Serbian system–which was unacceptable for us,”  Dugolli said.

“We were disappointed by classes being held in basements and garages,” said Dugolli, who is currently Dean of the University of Prishtina’s Philosophy Faculty. “A new reality took root in ‘97. We were a rebellious generation that did not abide by the wishes of political organizations.”

The October 1 protest was also “the beginning of the end” for the late President Rugova’s strategy of so-called passive resistance.

Albin Kurti, who attended the panel in between stops on Vetevendosje’s local election campaign, said that the October 1 protest was the defining moment catapulting the period of passive resistance into ‘fighting back.’

“Twenty years later, my impression is that the protest had a powerful basic element which at the time we were not aware of. It broke the status quo, as there were no protests from 1992 until 1997, and it accelerated the process of liberation,” he said, arguing that the resistance before the protest was defined by desire, patience, and passivity, and after, by passion, commitment, and an active objective.

Dugolli said that the student organizers had wanted Rugova’s support.

“Ibrahim Rugova had a hugely important role and we thought his support would strengthen our movement. The moment the movement was conceptualized, we [the student leaders] met and presented a request for LDK, but apparently, it was never able to reach him,” he said. After more unsuccessful attempts to contact the LDK leadership, and much persistence, the students met with Rugova. According to Dugolli, Rugova said that he would not be able to support the students, because if violence were to escalate, he did not want to be responsible.

They met again a couple of days before the protest, and according to Dugolli, the LDK leadership asked them to postpone the protest for 15 days. “We saw that as trying to break us down,” he said, adding that the students and Rugova instead agreed not to openly reject or support each other.

The panelists emphasized that the students had not taken on any political parties’ agendas, and that the protest was entirely and organically organized by the students. They were inspired by the history of Albanian protest in Kosovo, and particularly by protests in 1968 and 1981.

However, Salihu Bala emphasized, outside contributions and moral support from European NGOs, USAID, diplomatic missions, Roma families in Prishtina, and some students from student unions in Belgrade should not be forgotten.

The former student leaders pointed out that the students had the unconditional support of Ejup Statovci, an academic remembered for his political independence and for steering the university through difficult times.

Salihu Bala also nodded to the women’s role in the October 1 protest.

“The peaceful student protest was not only made of big names, like the former rector, but was created by all of those in high schools and faculties who generated this social change. Especially the girls, who were 55 per cent of the students, at a time when it was not easy to be a woman, an Albanian, a student activist,” she said.

Social Movements in Kosovo will continue on Saturday and Sunday, October 7 and 8, with a full schedule of panels and presentations. The conference is organized by Alter Habitus, the University of Prishtina, the University of Graz, and the Centre for Southeast European Studies.   For more information, visit Facebook.