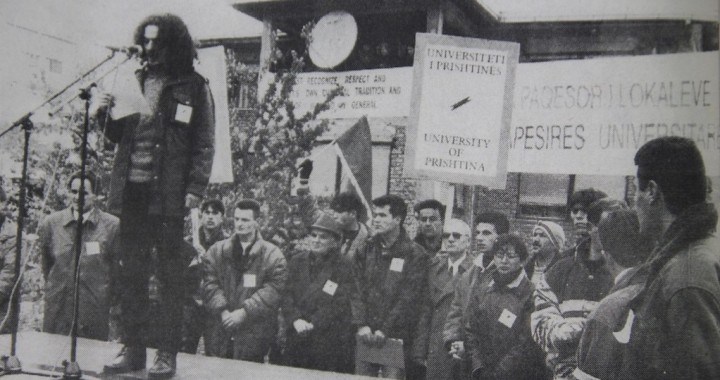 Where is the spirit of 1997? Student protests and their shattered legacy

In post-war Kosovo, student organizations failed to find a renewed, genuine sense of purpose and activism that goes above and beyond daily narrow political interests.

The October 1, 1997 student protest marks one of the most important moments in Kosovo’s recent history. In addition to building on the legacy of previous student movements and protests – in particular, the ones in 1986 and 1981, during which students acted politically to challenge unjust Yugoslav/Serbian state policies against the Albanian population in Kosovo – the 1997 protest was also important for it heralded a change in the course of Kosovo Albanians’ struggle for freedom and independence. Namely, it marks the beginning of the end of the Democratic League of Kosovo, LDK, and Ibrahim Rugova strategy of self-restraint and non-provocation (often referred to as ‘passive resistance’ by opponents).

For almost a decade, LDK and Rugova had dominated the political scene in Kosovo and had managed to build a conceptual and political hegemony in Kosovo. They had come to dominate almost all the sectors of the so called ‘parallel system,’ including the media, healthcare system, education system, and the tax-levying system in Kosovo and in the diaspora (the so-called ‘the three per cent fund’).

In fact, the student protests were made possible as a result of changes in the leadership of the University of Prishtina and the Student Union, UPSUP, where for the first time candidates not affiliated with LDK won the election. From  the outset, the new student leadership, with people like Bujar Dugolli, Muhamet Mavraj, Driton Lajci, Albin Kurti, Milot Cakaj and others, made it clear that it didn’t agree with the philosophy of pacifism, stand-by politics and declarations of their predecessors. Rather, according to Driton Lajci, they were “determined to redirect student energies towards protests against occupation, but also the LDK.”

Moreover, the UPSUP-run magazine Bota e Re became one of the main platforms for criticism aimed at Rugova’s and LDK’s peaceful political course. It constantly featured articles criticizing the status quo in Kosovo, LDK’s political impotence, as well as its failure to push for the implementation of the 1996 Rugova-Milosevic agreement (mediated by the Community of Sant’Egidio) on education, that foresaw the return of Albanian students to university buildings.

Despite LDK’s opposition and international diplomatic pressures, the UPSUP organized a series of massive protests in late 1997 that were met with force by Serbia. They represent the first acts of active nonviolent resistance since the early 1990s and, in the words of the late and renowned scholar and activist Howard Clark, were “a model of non-violent confrontation.”

These protests, which were supported by many of the LDK opponents such as Adem Demaci and Rexhep Qosja, produced two major political effects. First, they managed to expose Serbia’s brutality in Kosovo much faster and more bluntly than the LDK’s strategy of passive and everyday contestation, thus gaining international media and political attention. Second, they presented the first major crack in the LDK’s and Rugova’s political monopoly. One of the main postulates of the LDK and Rugova for years was “They [Serbs] have power, we have authority” (Rugova’s words).

However, these protests, and the widespread support they gained among young people in Kosovo, demonstrated that Rugova’s authority among Kosovo Albanians was shaking. After the protests, the UPSUP not only became a political address for foreign diplomats and journalists visiting Kosovo, but also the epicentre of the anti-LDK opposition in Kosovo. By the same token, Bota e Re magazine spearheaded criticism against the LDK and Rugova and together with Koha Ditore (one of the few independent medias in Kosovo at the time) presented the only challenge to the LDK’s well established and long lasting media control.

Students have historically been one of the key building blocks in the Albanian struggle for cultural and national affirmation.

However, if we judge by the demands of the protests alone, the 1997 protests were unsuccessful, for they did not manage to sustain their alternative non-violent strategy of resistance for much longer, nor achieve more limited goals such as the return of Albanian students to the university’s campus and facilities. In fact, their success was undermined by other major forces – related to the escalation of the conflict and the beginning of armed clashes months later – that the student protests had helped unleash. As Clark put it, “the glimpse of an alternative non-violent strategy came too late to change the course of events.” In turn, these major forces led to war, international intervention, and, ultimately, Kosovo’s de facto independence from Serbia in 1999, something that wouldn’t have crossed the minds of even the biggest optimists among student leaders two years earlier.

Nonetheless, the 1997 student movement in many ways represents the apogee of student activism and political engagement for the greater social and national good in Kosovo. Students have historically been one of the key building blocks in the Albanian struggle for cultural and national affirmation. However, the national mission that was bestowed on them has in fact prevented them from fulfilling their academic potential and mission. Both the University of Prishtina and its students have mainly served other purposes and interests – national, political, and worse, party and careerist. In particular, in the post-war period, the University of Prishtina had become a crucial political resource for the main contending parties (in particular, PDK and LDK) in Kosovo’s post-war, highly politicized context.

Unfortunately, post-war UPSUP remained a highly politicized organization that put narrow party loyalty and interests above student interests and academic needs. Save the short-lived ‘Movement for a Different University’ (Lëvizja Tjetërqysh!), which campaigned against politicization of higher education, academic incompetence, plagiarism, and poor teaching standards, the overwhelming majority of student organizations that emerged after 1999 either served various political parties or clientelist groups within the university. Most of their demands were parochial and even anti-academic. It’s truly unfortunate to see that extension of exam terms (one of the most retrograde university practices that ensures students can either postpone an exam or take it indefinitely) tops the list of student demands today.

The education sector symbolizes one of the biggest failures of Kosovo institutions, the political system, and the society in general.

Twenty years since the last massive student protests, Kosovo has changed enormously in many respects. However, regardless of the enormous opportunities that emerged as a result of the removal of the Serbian control over Kosovo, international administration and assistance and, most importantly, Kosovo’s independence, the education sector symbolizes one of the biggest failures of Kosovo institutions, the political system, and the society in general.

Undoubtedly, students and their organizations have their own share or responsibility. They failed to find a renewed, and one might say – genuine, sense of purpose and activism that goes above and beyond daily narrow political interests and national(ist) considerations. Post-war student organizations failed to capture the spirit of their predecessors and, crucially, to revolt against Kosovo’s post-war masters (some of whom had been active in the 1990s student movements) whose corruption, greed and incompetence has continuously failed them as well as the wider society. Thus, student mobilization and revolt against the university leadership and political elites is more indispensable than ever. The student body needs to capture the spirit of the 1997 student movement and fight harder for a better university standard and a fairer, more just and progressive society.