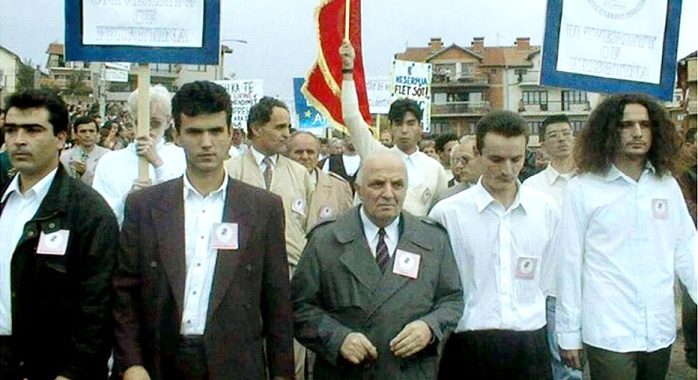 Photo courtesy of the Philosophy Faculty.

The Philosophy Faculty hosts talks and a documentary screening to remember the 1997 student protests for Kosovo Albanians’ access to education.

Twenty years ago, on October 1, 1997, students and University of Prishtina professors took to the streets, demanding for the Milosevic regime to implement an education accord to allow Albanian students back into their school buildings.

The 1997 protests were one of the largest protests in the 1990s, a decade which began with segregation and the dismissal of Albanians from public institutions.

The students set out to march from the Velania neighborhood to the city center, aiming to enter the university buildings the regime had barred them from. Though the march was violently quelled by Serbian police, protests would be reorganized during the days and months ahead.

Dorajet Imeri, Assistant Professor at the Philosophy Faculty and an organizer of the commemorative events, said that although there have been events in the past to mark the October 1 anniversary, the faculty wanted to organize a broader, three-day program this year.

Beginning this Sunday, October 1, the University of Prishtina will host a conference, a photo exhibition, and a documentary screening to commemorate the protests.

On Sunday evening, at 8:00 pm, a documentary dedicated to the October 1 protests and to student organizing in the ‘90s will be screened at ABC Cinema.

On Monday morning at 10:00 am, the academic conference titled “The Student Movement in Kosovo and the October 1 Protest” will kick off at the Faculty of Philosophy.

Meanwhile on Tuesday, at 6:00 pm, the faculty will host a photo exhibition at the Kosovo National Museum  titled “October 1 Through Photos of the Time.”

The events from October 1 to October 3 are open to the public. See the event’s Facebook page for more information.