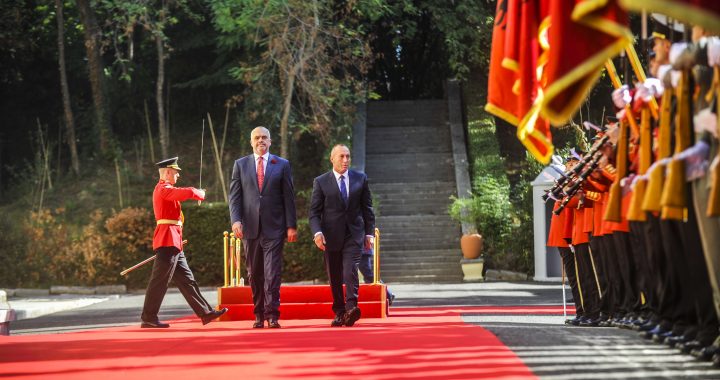 The Rama-Haradinaj meeting was an exercise in empty gestures; an opportunity for Rama to spew propaganda points that sound like bygone announcements from the communist Radio Tirana.

Edi Rama does what he knows best: artistic performances on the political stage. During his meeting with his Kosovar colleague, Ramush Haradinaj, he said that the embassies of the two countries should be united. He talked about the importance of Skenderbeg. He announced the establishment of a common academy of arts and sciences for Kosovo and Albania. He also informed us that Ramush Haradinaj had become a citizen of Albania (as a point of reference: a Swiss politician with Italian parents relinquished his Italian passport before he accepted the office of Foreign Minister). With his well-established nonchalance, Rama gave Haradinaj a hard slap about the border demarcation deal with Montenegro, telling the head of the Alliance of the Future of Kosovo, AAK, to depart from his opposition position about the deal.

Haradinaj could be happy with Rama’s request, because now he can justify before the Kosovar public that even Albania is demanding that he withdraws from his position. Meanwhile, Vetevendosje reacted mildly, although Rama’s slap hits this party, which has opposed the demarcation deal vehemently, too. If Vetevendosje has political talent to talk about German elections, it should also be expected that they declare whether they agree or not with Edi Rama’s request that the demarcation deal be ratified by the Kosovo Assembly.

Overall, the meeting of the two governments in Tirana was a concert of patriotic slogans and symbolic oaths, without any concrete decisions. It echoed earlier meetings between Kosovo and Albania that were decked out in kitsch glamour, where politicians cheered for unification while flexing their homeland-loving muscles under flags with eagles and European stars.

They did not talk about the economy. Nor did they mention common infrastructure projects. What they call the Nation’s Highway has remained unfinished, especially in parts surrounding the Kukes area, which are very dangerous for any traveler: half-finished or unstarted viaducts, breaks in the highway without any warning, cows and other herds roaming the road, people crossing as if they were strolling the promenade, cars and trucks driving at night without headlights on and no police in sight.

They did not talk of the problem with Kosovo potatoes that at times are exported to Albania, and at times are blocked by the Albanian customs. Both countries produce little and import a lot from Serbia, Greece, Macedonia, Italy, China, and Germany. We’re not talking about technology, but mostly for food goods, cookies and pasta. Because the great Albanian nation, the nation of Skenderbeg, Edi Rama, and Ramush Haradinaj, has no time to deal with the country’s development. The nation has great issues. Because great issues make us forget that in 2013, Tirana and Prishtina signed an agreement to remove roaming charges. Naturally, they have not been removed yet.

Before Haradinaj went to Tirana, the Foreign Minister was there for a visit. Then the Kosovo Security Forces, KSF, Minister ran over there as well. In the next couple of days, it is very likely that other ministers will also visit. Without a plan, without an idea, without projects, without agreements. Just so they can appear in the media, to create the impression that something is being done.

A former colleague of mine once described this phenomenon very accurately: our political teams are like the elderly of Bokshiq. One neighborhood’s elderly go visit another; once they get bored the hosts join their guests and go to their neighborhood to continue and hang out. This way the visit never ends, nor the coming and going. These things also come with a cost, let’s be frank. Rows of cars, large delegations, bodyguards, staying in hotels, lunches, dinners, coffees, per diems. It is true that these two countries are among the poorest countries in Europe when it comes to annual income per capita (for Kosovo, 7,800 euros, and for Albania, 8,700 euros). Meanwhile, Slovenia is at 24,400 euros. I don’t need to go further than the region.

The day the two political matadors met, Germany expelled 106 Albanian citizens and 44 Kosovo citizens through the Dusseldorf airport. They did not go to Germany out of the blue, but because of poverty. A German federal police spokesperson said that the plane had left at noon.

Before the Prishtina and Tirana governments met, the German-French television Arte broadcast a documentary about the growing and contrabanding of cannabis in Albania – a billion dollar business of the Albanian mafia. “Over the last few years, the country in the Adriatic coast has been transformed into the biggest producer of this drug in the world – as its favored by corruption, poor rule of law, and prevalent poverty,” the documentary narrator said. When it comes to corruption and organized crime, Kosovo and Albania are truly siblings and allies.

But since political classes remain mainly controlled by economic oligarchs and pre-political structures, the chances of being integrated into the EU become flimsier every day, despite Edi Rama’s rhetoric on Twitter and the almost daily whining of Kosovo politicians that Brussels “is treating us unfairly.”

The Western Balkans is once again drenched in chaos, but Europe cannot be criticized for it; instead, fingers should be pointed towards local oligarchs who are leading the Balkans and damaging democratic processes. This is at least what Judy Dempsey, former correspondent for Financial Times in Brussels and Editor-in-chief of Strategic Europe, said to Radio Free Europe. Our oligarchs do not take such opinions seriously. They are busy with reciting slogans. Until the next show: “Live from Radio Edi Rama.” This propaganda of progress has slowly started to sound like the bygone shows of Radio Tirana.