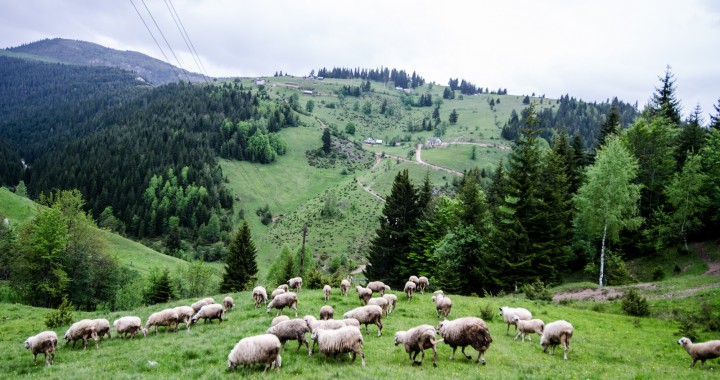 Sheep roam freely in the village of Stankaj in the Rugova Valley, near the border with Montenegro. Photo: Valerie Plesch.

Ramush Haradinaj dismisses the commission on border demarcation with Montenegro and appoints critic and geography professor Shpejtim Bulliqi to establish a new team.

The new government of Kosovo Prime Minister Ramush Haradinaj made its first decision on Monday, dismissing the State Commission for Border Demarcation and Maintenance, headed by Murat Meha.

The government cabinet, with two abstentions, voted to dismiss the members of the State Commission.

Prime Minister Haradinaj appointed geography professor Shpejtim Bulliqi to set up the new team to assume responsibility for the creation of the State Demarcation Commission.

Border talks between Kosovo and Montenegro opened in 2011, and a demarcation agreement was signed between the two governments in 2015. The demarcation deal has since been a source of contention and protest in Kosovo.

Haradinaj’s party Alliance for the Future of Kosovo, AAK, has maintained opposition to the deal, and participated in the protests and obstructions of Assembly sessions that made border demarcation a defining issue of last year.

In March 2016, Former Kosovo President Atifete Jahjaga established the Ad Hoc Commission for Reviewing the Border Demarcation between Kosovo and Montenegro, and its conclusive report found that the deal was in line with the 1974 Yugoslav Constitution of the Autonomous Province of Kosovo, the 2007 Ahtisaari Plan, and the 2008 Kosovo Constitution.

Then in January 2017, the government established the State Commission for the Measurement of Territory, which published a report in February that again said Kosovo had ‘lost no land’ in the border deal.

But this didn’t sway the opposition parties, including Vetevendosje, NISMA, and AAK, nor did it many of the highlanders living in the affected region. They maintain that the current deal takes 8,000 hectares of land away from Kosovo.

During his time as head of the State Commission for Border Demarcation and Maintenance, Murat Meha emphasized that the current agreement is legally sound, based on information on the cadastral boundaries, municipal boundaries, and topographic maps. He also said that the commission met several times with villagers from the Rugova region and with mayors of the four affected municipalities.

Shpejtim Bulliqi, who is now the responsible party for forming a new state commission, was a vocal critic, vehemently opposed to the current agreement.

Bulliqi, a professor and former MP for the Democratic League of Kosovo, LDK, argued that the commission led by Meha made severe errors and divergences. His position was in conflict with the position of Former Prime Minister Isa Mustafa’s LDK–who wanted to ratify the deal–and cost him a place on LDK’s list of MP nominees for the June 11 elections.

The Kosovo Assembly was never able to hold a vote on the deal’s ratification, which required a two-thirds majority. Sessions were continuously postponed and withdrawn from the agenda, despite the EU declaring that implementing the current agreement is pivotal to Kosovo achieving visa-free travel.

In an interview last summer with Jeta ne Kosove, Montenegrin Prime Minister Milo Djukanovic said that his country is not looking for “even one meter [of land] from the territory of Kosovo,” and that he is open for legal arbitration.

On Sunday,  Prime Minister Haradinaj told Voice of America that his government will “correct” the current version of the agreement.

“Fortunately Montenegro is a neighbouring state and we welcome its progress, especially its NATO membership, which is our goal too, so I don’t see any difficulties on this issue,” he said.