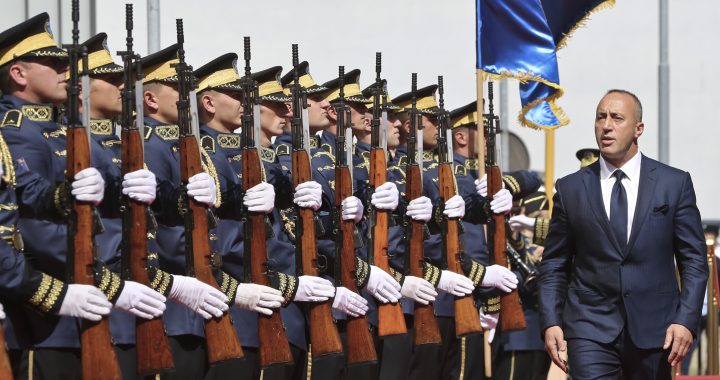 Ramush Haradinaj walks past the honor guard during a welcoming hand over ceremony on Monday. | Photo: AP Photo/Visar Kryeziu, BETA

Ramush Haradinaj takes over the PM office today, and has still not yet presented a governing program. But as things stand, with just a few superficial changes he could recycle his 2004-2007 program.

Two days before he was elected by the Parliament, Ramush Haradinaj’s Wikipedia profile had been changed, foreshadowing that he would start his job as Prime Minister on September 9. This Wikipedian ‘prophecy’ appeared to be true: on Saturday, the Kosovo Assembly did elect the new prime minister. For Ramush Haradinaj, today is the first day in office, in his second mandate. Or his 97th day as PM, if we count the 96 days of him being in government 13 years ago. Haradinaj was first elected prime minister on December 3, 2004, but concluded his mandate on March 8, 2005, after charges were raised against him by the International Criminal Tribunal for the former Yugoslavia.

When he was elected prime minister at the age of 36, Haradinaj was one of the youngest PMs in Europe; while today, his age of 49 is the least newsworthy fact about him. When he was first elected, Haradinaj received 72 votes in favor. When he was elected for the second time, he only got 61 votes, the smallest number of votes that a prime minister ever received at the Kosovo Assembly, despite the fact that the governing coalition is comprised of the largest number of parties that ever formed a government – 22 of them.

In 2004, AAK had 11 seats in the parliament; in addition to the premiership, the party governed 30 per cent of the ministries, or four out the 14 ministries that the government had at the time. Today, Haradinaj’s party leads nine per cent of the ministries, or only two of the 21 ministries. The same amount of ministries also belong to an individual who did not even participate in elections, Dardan Gashi, who will be both deputy prime minister and the Minister of Diaspora and Strategic Investments. Additionally, three ministers in the Haradinaj government, those who represent the Serbian List, Srpska Lista, do not recognize Kosovo as a state, and as a consequence cannot even recognize Mr. Haradinaj as the prime minister of a sovereign country. Four other ministers, according to the agreement between the PAN coalition and AKR, cannot be fired without the agreement of the head of AKR.

For the past 13 years, Ramush Haradinaj and the AAK have been waiting to return to the head of the government. AAK has ran with the slogan “With Ramush as Prime Minister,” even when he was in prison in the Hague. AAK has continuously insisted that the first 100 days of the Haradinaj government will be the most successful of any Kosovo executive. But, was Haradinaj ever a successful prime minister? If we evaluate his governing, should we evaluate only those 96 days during which he was head of government, or also the 984 days after his resignation, when the governing was continued by his fellow party-members?

The Haradinaj government’s 2004-2007 governing program was approved by the Kosovo Assembly on December 21, 2004. The program included points that each and every governing program for the past 16 years has had: economic growth would be increased to seven per cent in a year; a new power plant with capacity of 1000 MW would be built; new jobs would be generated; the country would solve its final status and become a member of Euro-Atlantic structures.

Suspicions and accusations of misuse of public funds appeared from the first month of Haradinaj’s premiership. In December 2004, 160 million euros were spent, which forced the International Monetary Fund, IMF, to criticize the government for spending without criteria. The Haradinaj Government had set a goal for itself to ratify 102 laws in its first year, but throughout its three-year mandate it managed to ratify only 79 laws, the smallest number of laws approved during a single governing mandate.

Besides multiple failures in implementing the governing and legislative programs, the Haradinaj government was made up of people who were not competent to govern. In the first couple of days in power, Bujar Bukoshi accused the Deputy Prime Minister Adem Salihaj of paying 180 thousand euros to get his office, and making this payment to mafia groups which control the LDK – the same groups that were also active to ensure the MP votes for Haradinaj in 2017.

Astrit Haracija had been appointed Minister of Culture, Youth and Sports – a person who began spending the budget without any criteria from day one – and even himself said that he “had spent all [his] father’s money, and even the government’s.” For his abuse of office as minister, Haracija was saved without a sentence only thanks to the negligence of courts, with his case passing the statute of limitation. After Haradinaj surrendered to the Hague in 2005, the government lead by his fellow party members was a government with one of the highest number of scandals, abuses and crimes. Since then, AAK has not managed to clean up its image for 13 years.

Haradinaj has not yet presented a governing program. But with a few superficial changes, he could use the same governing program from 2004-2007. Either way, Kosovo has never had an annual rate of economic growth of seven per cent, as Haradinaj promised in 2004. Either way, there have been no developments in the energy sector since the war ended, with the exception of the two power plants now being 17 years older. Either way, the unemployment rate is at the same level as it was in 2004, and the same can be said that nothing has changed in health, education, or many other sectors.

But Haradinaj of 2017 will have a much more difficult job than Haradinaj of 2004. The government he will lead is a government that does not show accountability to anyone, not even to him as Prime Minister. In the Haradinaj government of 2017, the economic development sector has been distributed to eight different ministries, which will be lead by ministers of seven different parties. It remains to be seen whether his second mandate will be longer than his first.