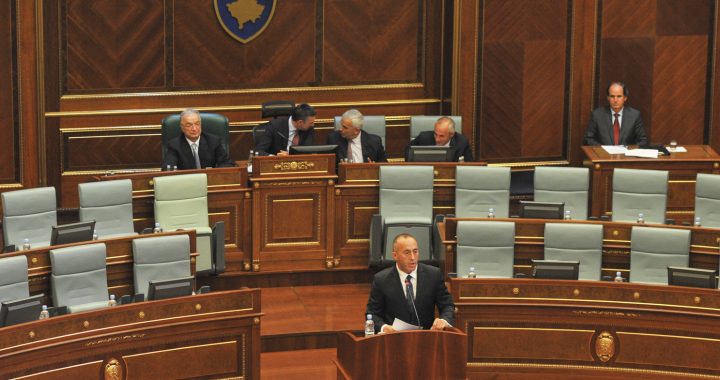 The Assembly voted on the wide-coalition government, installing former PM Ramush Haradinaj at the helm of Kosovo’s bulkiest government to date.

The Kosovo Assembly ushered in Prime Minister Ramush Haradinaj’s new government with 61 in votes favor and one abstention. Vetevendosje and the Democratic League of Kosovo, LDK, representatives boycotted the vote and left the room.

The session was paused for about two hours, with the Serbian List failing to arrive back in time from a meeting with the Serbian government in Belgrade. Both Vetevendosje and the LDK representatives accused the PAN coalition being in the hands of Belgrade.

In the first part of the session, the new Prime Minister took to the Assembly floor and promised to prioritize Kosovo’s EU path and reconciliation with Serbs.

“The dialogue with Serbia is without an alternative…Kosovo needs a dialogue among the people, and not only the political elite. We will open an internal dialogue,” Haradinaj said.

He then switched into Serbian language to say that Albanians have always respected other religions, values, and identities.

“With the other minorities we have succeeded and today we all stand together. We will work to achieve that trust with Serbs as well. Dignity and respect will be my motto for all that live in Kosovo,” he said.

Local media have reported that with 21 ministers and around 50 deputy ministers, the new government is the largest Kosovo has ever had. Civil society groups have criticized the large number of ministerial posts in Haradinaj’s government, given in order to satisfy his various  coalition partners’ appetites.

It took weeks of negotiations to ensure the votes for a Haradinaj government.

On Thursday, Kadri Veseli of the Democratic Party of Kosovo, PDK, was elected as Assembly Speaker by a slim majority. Soon after, Kosovo President Hashim Thaci gave the mandate to form Kosovo’s new government to Ramush Haradinaj, leader of the Alliance for the Future of Kosovo, AAK.

After the Kosovo Assembly passed a no-confidence motion against the Isa Mustafa government, AAK joined a pre-election coalition, called PAN, with PDK and NISMA.

Although PAN won the most votes and thus had the right to nominate an Assembly speaker, Kosovo remained in a political deadlock for weeks, because the coalition could not secure a majority of elected MPs to vote for their candidate until they made a deal with Behgjet Pacolli’s party AKR on Monday.

PAN-AKR then met with members of the Serbian List to ensure that their MPs were on board.

The Serbian List’s decision to back the PAN coalition’s candidate for Assembly speaker drew harsh reactions in Serbia, since Veseli’s election opened the way for Haradinaj to form the new government.

During the Kosovo War, Haradinaj was the commander of the Kosovo Liberation Army’s, KLA, Dukagjin region, earning him the nickname “Rambo.”

Haradinaj was previously elected as PM in 2004 during the period of the Provisional Institutions of Self Government, PISG. However, he stepped down after only 100 days in office after being indicted by the Hague’s International Criminal Tribunal for the Former Yugoslavia, ICTY, in 2005. He was acquitted of the war crimes charges twice.

The new Prime Minister’s government was formed amidst serious political division in Kosovo.

Shortly before the session was called to vote on the new government, even an MP from the PAN coalition, Zarif Berisha of NISMA, announced that he would not vote in favor of Haradinaj’s government.

One reason Berisha gave was that Haradinaj’s government contains “unworthy names with questionable, corrupted pasts, as well as protagonists of the ‘Pronto” affair,” referring to leaked wiretapped conversations between PDK officials.

Berisha abstained from voting but was present in the session.

During the June 2017 snap elections campaign, Haradinaj’s promises included to establish the Kosovo Army, and to achieve visa liberalization within 90 days.

At Saturday’s session, Deputy Prime Minister Enver Hoxhaj called for for internal reforms to improve the quality of life for all citizens.

“The best reform programme would be the national program for the Stabilization and Association Agreement [SAA]. This will be our framework as political entities that will form this government,” he said, adding that jobs, economic development, and attracting foreign investments will be the new government’s priorities.