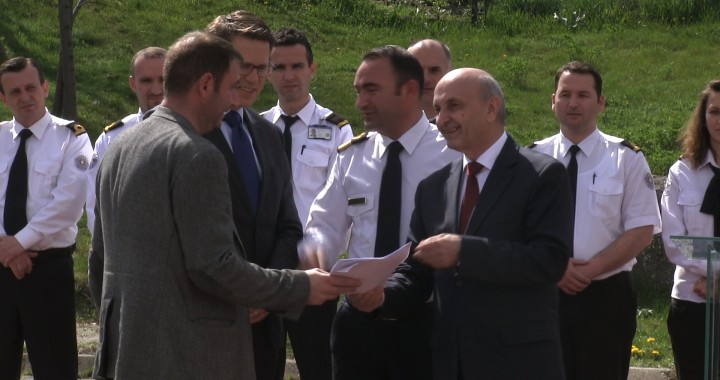 Kosovo has started implementing the Stabilization and Association Agreement with the European Union today. This is the most important ratified document so far on Kosovo’s road to EU membership.

The agreement entered into force at a solemn ceremony at the Kosovo Customs Agency. Prime Minister Isa Mustafa delivered the 600 pages SAA document to a citizen of Kosovo.

Mustafa said that Kosovo is going through its next phase of political, social and economic development.

“This agreement aims to support the economic transition of Kosovo and strengthen its integration in the common market of European Union during a timeline of no longer than 10 years starting today,” said the prime minister.

According to Mustafa, so far the trade relationship between Kosovo and the EU had been set through autonomous trade measures. Starting today barriers will be removed for Kosovo companies.

“Kosovar companies from today on can export their products with very low expenditures compared to those they operated with until now and without administrative barriers,” added the Prime Minister.

The prime Minister said that through this agreement they aim to attract foreign investments in Kosovo that, according to him, will bring new jobs and will increase economic development and social welfare.

Kosovo Customs director Lulzim Rafuna said that his agency will be an administrative partner in cooperation with 28 customs administrations of the EU member states.

“Kosovo Customs from today will go through a higher level of advancement in the aspect of accountability towards state institutions and professionalism and European integration,” said Rafuna.

Safet Gerxhaliu, president of the Kosovo Chamber of Commerce said that the agreement is not a magic stick that will solve all problems but that it will require commitment.

“It is now possible to compete in a market with 500 million consumers through a new partnership with 28 member states of the European family and I want to believe that this is the goal we have had for years now,” said Gerxhaliu.

The Stabilization and Association Agreement can result in good trade relationships with EU countries, but it focuses on economic reforms that will ensure free trade with the EU and the region, but also on fields that have to do with regional cooperation, regional political dialogue, as well as justice and internal affairs.

The agreement was signed in October last year in Strasbourg between Deputy Chief of European Commission, Federica Mogherini, and Mustafa. A few days later it was ratified in the Assembly.

This agreement was approved by the European Parliament in January this year.