The untold story of the Albanian plis

Although the hat has experienced a revival, mostly in special occassions and football matches as a national symbol, the tradition of wearing the white woolen headgear is disappearing amongst Albanians.

The plis, the traditional Albanian woolen hat, must be kept white at all times, and when this is no longer possible, one has to get a new one. This is how Muharrem Buqolli, who has kept a white plis on his head for over 70 years, begins his story.

The 80 year old from Raushiq in Peja explains that he began wearing the plis when he was 10. Wearing a plis is not easy and requires special care.

“When it becomes dirty, we wash it. When it can’t be washed any more, one needs to buy a new one. The plis must always be white,” says Buqolli, explaining the importance of meticulous plis maintenance.

The traditional hat is worn by Albanians in several Balkan regions and although it comes in various shapes and styles, it is always white.

Dr. Bashkim Lajci, a professor of ethnology at the University of Prishtina, says that the shape of plises or qeleshes, as they’re also called, varies from region to region.

He distinguishes several main models like the tall qeleshe  from middle Albania (Tirana, Durres, Kavaje), the flat qeleshes worn in some parts of Gegë (northern) Albania (Mat, Mirdite, Diber) and the round qeleshes, accompanied by tirq, traditional men’s trousers, which can be found in the rest of northern Albania and Kosovo. 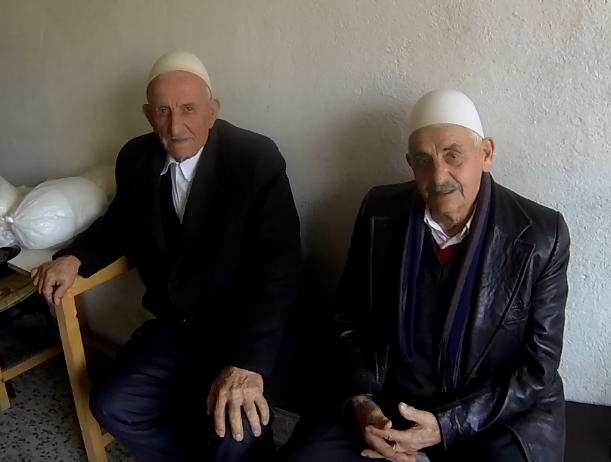 “Being one of the main accessories in our national garb and a symbol of Albanian national identity, the plis has been arduously preserved by our people for a long time,” says Lajci.

In the 1990s, the Serbian regime banned the plis, explains the professor.

“The regime of former Yugoslavia banned the plis, at times even violently removing it from the heads of young Albanians,” he says. “There were cases that people were arrested for wearing the plis.”

As the years go by however, fewer people are continuing the tradition of wearing the plis. Halil Podrimcaku, another elderly man from Dubova in Peje, for example, is the only one in his neighbourhood to still wear a plis.

Podrimcaku put the plis on for the first time when he was 15. He hasn’t taken it off since, not even when he travels abroad. Recounting stories from his travels in western Europe, he says that even amongst thousands of tourists, his white plis would catch the attention of the Europeans.

“Even when I went to Germany, I never took it off. I also went to Switzerland, and I didn’t take it off. Many even told me ‘he has a cast on his head’,” says Halil laughing. “I’m never gonna take if off of my head. The plis symbolizes many things, but above all, it symbolizes that I’m an Albanian.”

The dying art of plis-making

Fatmir Lata from Peja has been a plis-maker for more than 40 years and he has produced innumerable plises with his own hands. There’s still an interest for plises, he says, but definitely not as much as in the past.

“In the past, 40 or 50 years ago, the plis was worn more,” explains the artisan in his shop in Peja. Back then, Albanians also lived in an extended family, bashkësia, and all the men had to wear plises. “There were many members in the extended family, for example, within a household, up to 20 family members wore a plis,” says Lata.

Although he considers his craft to be disappearing, he claims he still has plenty of work.

“At the moment, interested [customers] are disappearing because many who belong to an older generation and who wear a plis are dying out. But younger people are also interested,” explains Lata, adding, “They’re especially interested in buying them for their children.” 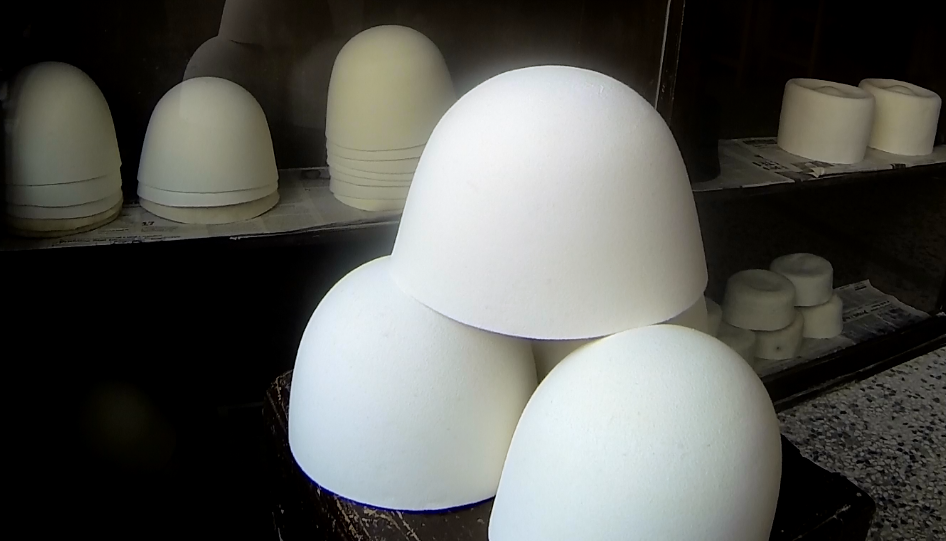 Young people buy plises mainly as souvenirs or to wear them in special occassions. Together with other garments of the traditional Albanian garb, the plis is worn by men for special occassions, such as weddings. Yet, with the exception of the elderly, nobody wears plis day to day.

Even if the plis has lost somewhat of its popularity, its symbolic power seems to still hold sway, especially in football stadiums. The plis, for example, has been the symbol of the Prishtina football cub sice 1987, when it’s fan club Plisat [Plises] was founded. But it’s not only Prishtina fans who are seen donning the white felt cap in stadiums. Supporters of other teams, especially of the Albanian national team, are also seen wearing plises alongside the red and black national Albanian flag. Yet when the match is over, the hats disappear. That is until the next game.

“People are still interested in buying plises, its trace will not be entirely lost, but the plis is increasingly disappearing,” recounts the plis-maker. 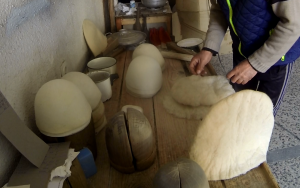 Lata also says that regardless of the traditional methodology used to make the plis, the serial production is an inevitable necessity.

Between 30 and 50 plises can be produced within a week, explains the craftsman. “One cannot produce a only one plis, becuase it requires many operations,” he says.

The craftsman appeals that the craft be protected by the government, in order for traditional Albanian values to be preserved.

The secrets of the plis

Indubitably, a woolen hat can be attention-grabbing, but very few know the history of the connection of Albanians to the plis.

When discussing such mysteries of the sophisticated white hat placed on top of the contemporary Albanian’s head, Professor Lajci ties the tradition to the Pelasgians and Illyrians, two ancient peoples that inhabited the Balkan peninsula, considered the progenitors of the Albanians.

In addition to the term plis, which is widely used in Kosovo, Lajci expalins that the term qeleshe is used in Albania, adding that other synonyms also exist.

“The name plis is believed to originate from the ancient Greek term ‘pilos,’ which describes an empty hat. In the Dictionary of Albanian Language the word plis is described as a piece of textile which is not woven but made with compressed wool and washed a few times with soap,” explains Lajci.

It is generally believed, claims the ethnographer, the Albanian headpiece is directly related to a similar headgear worn by the Illyrians, amongst whom it also appeared in four variations.

Amongst the different types, Lajci distinguishes  the most common model, a round hat, “which appears in the monument in Zenica [in Bosnia], and essentially does not differ much from the contemporary Albanian qeleshe.”

Lajci also quotes the academic work of Dhimitri Pilika, who writes about the plis in his book Pelasgians and our denied origins.

“Qylafi [plis] is unanimously accepted as a pre-Hellenic element. Since 2000 BC it was worn by the poor and slaves from Pannonia all the way to and beyond the bay of Corinth,” writes Pilika.

According to this author, Chaonia, and especially the ancient settlements of Oricum and Tragjas (both near Vlora, Albania) served as “the special cradle” of the Albanian plis for thousands of years, and continue to play such a role to this day.

How one wears a plis communicates certain meanings, explains Lajci, and it also determines the character of the owner.

The Rugova highlanders, for example, tie a white cloth around the plis. The piece of cloth, which is buried together with its owner,  is supposed to serve as as a memento mori while the plis-wearer is alive.

Other, more frivolous, ways of wearing the plis can signal the owner’s personality and mood.

“If the plis is pushed behind the head, towards the nape, this is a sign of worry, or of a spiritual depression,” the ethnographer explains.

Meanwhile, if one puts the plis over the brow, either on the right side or the left, this symbolizes that the person is of a bad character, Lajci claims.

“If you wear the plis askew, over the forehead, covering both brows, this signals vanity, immaturity, and lack of earnestness,” he concludes.

Either way it is worn, indubitably the plis signifies that the bearer is an Albanian – even one in a grouchy mood.

by Valerie Hopkins
Next: News