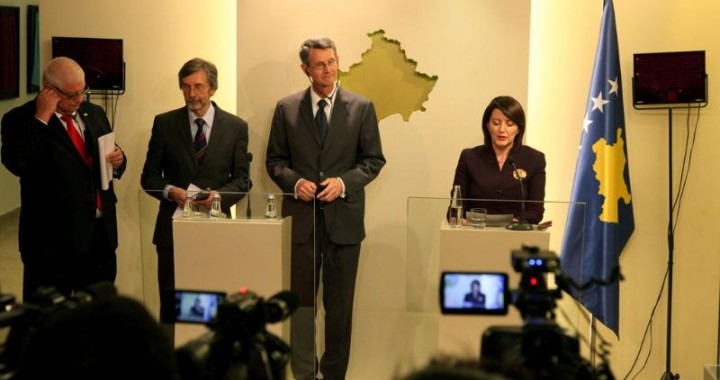 The Commission for Reviewing the Border Demarcation between Kosovo and Montenegro published its conclusions on Wednesday, finding that the border delineation “rested on sound legal basis.”

On Wednesday, the Ad Hoc Commission for Reviewing the Border Demarcation between Kosovo and Montenegro, established by Kosovo President Atifete Jahjaga, published its conclusive report. After consulting legal documents as well as the inhabitants of the area, the commission concluded that the border delineation between Kosovo and Montenegro “clearly satisfied international standards.”

The report submitted to the President concludes that the border delineation between the two neighboring countries was based on legal documents such as the 1974 Yugoslav constitution of the Autonomous Province of Kosovo, the 2007 Ahtisaari Plan adopted by the Kosovo Parliament adopted, as well as the 2008 Kosovo Constitution.

During a visit to Peja, the closest town to the contested area with Montenegro, Prime Minister Mustafa told the media that the experts’ findings made the border delineation process undisputable.

“It has been confirmed that we neither took [land] away from the Montenegrins, nor did we give them a meter of extra land,” said Mustafa on Thursday.  “There is not a single confirmed case in which even a single square meter has been exchanged with Montenegro.”

He also added that now there was no reason to protest.

“In this case, there are no more arguments to protest because they had the space to sit down with the commission and present their documents, as they did, but the commission has concluded that legally speaking everything is in order.”

At a forum for women judges and prosecutors, the US ambassador Greg Delawie also commented the commission’s report, saying it only confirmed that the government had done an excellent job in the border demarcation process.

“I am pleased, but i’m not surprised,” said Delawie, adding that the border between the two entities had remained the same for decades. “I really think it’s time to put this fake issue behind us, so politicians can spend their time on issues that will improve the lives of Kosovo citizens.”

The commission was formed because the demarcation deal became highly controversial and was the subject of a petition initiated by the opposition that garnered 200,000 signatures and was a key reason for opposition protests. Opposition activists had claimed that the deal was based on maps made after Milosevic diminished Kosovo’s borders in 1996 and KFOR further moved them in 1999, and would give Montenegro thousands of hectares of land.

The opposition coalition, made up of the Alliance for the Future of Kosovo (AAK), Vetevendosje, and Initiative for Kosovo (NISMA), have been protesting the border demarcation for the past months, arguing that it violates the previous border between the former Yugoslav autonomous province and republic of Montenegro.

On Thursday, Vetevendosje held a press conference declaring that the fact that the commission confirmed the government commission findings came as no surprise.

Glauk Konjufca, a Vetevendosje MP,  called the ad hoc commission “not serious,” criticizing their legal commentary which does not fall within their expertise.

“It is clear that whoever comes to Kosovo invited by our institutions cannot pretend to research, study, and assess hundreds of pages of geodesic studies and tens of maps in 15 days,” said Konjufca.

“This is a violation of state interests, as well as a denigration of scientific and professional work,” he concluded.