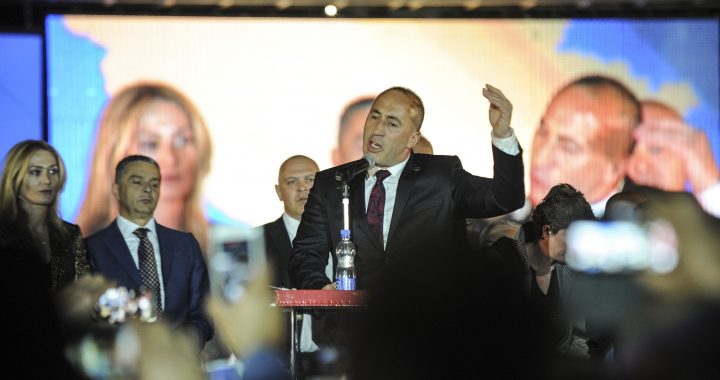 Haradinaj during a rally in Prishtina after his return from France, where he was detained for almost four months. | Photo: Atdhe Mulla.

Shortly before registration of pre-electoral coalitions closed at midnight, surprise coalitions were formed between PDK and opposition parties AAK and Nisma, and LDK and Pacolli’s AKR.

In the late hours of the night the Alliance for the Future Kosovo, AAK, spokesperson Muharrem Nitaj confirmed the party’s decision to join the pre-electoral coalition led by the Democratic Party of Kosovo, PDK. AAK joined the coalition with their partner Initiative for Kosovo, Nisma, the initiator of last week’s  no-confidence motion, which ousted Isa Mustafa’s coalition government.

“This coalition was an imposed solution. However, given the circumstances, we have decided to go for a coalition with the PDK, since as you know the coalition with Nisma was reached long time ago,” Nitaj said.

For the past two years, opposition parties AAK and Nisma opposed the departing government’s initiatives to ratify a border demarcation deal with Montenegro and to establish the Association of Serb-majority Municipalities.

According to the deal reached last night, AAK’s leader Ramush Haradinaj will be the coalition’s candidate for Prime Minister, while PDK leader Kadri Veseli will be the bearer of the list.

AAK-NISMA MP candidates will also take up half of the candidates list, which includes eight other smaller parties such as the Justice Party, PD, the Movement for Reunification, LB, and Edita Tahiri’s Kosovo Democratic Alternative, ADK.

“From today LDK and AKR are together. We will run in these elections in a single coalition and I am convinced that the victory is ours,” said Pacolli, signing the agreement for a coalition with Mustafa at his luxurious home. “Kosovo will definitely change.”

“The interests of Kosovo citizens is the main reason why we chose to make this pre-election coalition,” said departing PM Mustafa.

The coalition will run with the departing Minister of Finance Avdullah Hoti as its PM candidate. LDK, which has governed in coalition with PDK for the past three years, but was ousted with their coalition’s partner help, managed to also bring the newly established Alternativa party into their fold.

The two coalitions do not include the biggest opposition party Vetevendosje, which will run on its own.