Unlike other souvenir shops, Art e Zanat, owned by Ilire Lepaja, brings forth an alternative for her customers: an array of souvenirs inspired by Albanian motifs symbolizing some of Kosovo’s cultural heritage. Upon entering the shop, you are at once taken in by the row of shelves decorated with postcards, stands filled with her signature designs featuring depictions of traditional Albanian costumes, folk instruments, Yugoslav-era architecture and the post-independence Newborn monument.

Decorative cushions are neatly stacked next to each other, with pins scattered across the wooden drawers, making every corner worthy of discovery. Her workshop sits at the back, amidst her creations. 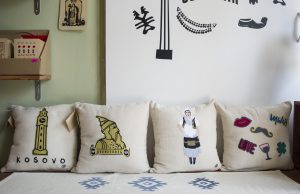 Her intricate illustrations featuring landmarks of Prishtina, Prizren, and Peja seek to establish a connection between places and people, adding a touch of sentimentality. Her cards are printed on recycled paper, and she is focused on having eco-friendly products. These fine details are what make Art e Zanat stand out amongst the crowd.

A graduate from University of Prishtina with a Master’s in graphic design, Lepaja worked as a freelance designer for ten years before she opened her own business. It took her three years to establish the shop that now sits just around the corner from the main building of the Kosovo government. After working for various graphic design studios, Lepaja decided to go at it alone, she said.

“I chose to pursue my own business, as I felt restricted by the expectations set when working for others,” she explained. “I wanted to be independent when it came to designing, and decided that souvenirs were products that I could make to promote myself as an artist, in that I was able to promote the country through symbolic designs that are inexpensive yet collectable.”

Although the shop, featuring her signature postcards, opened only 10 months ago, it took three years for her design ideas to materialize. Now, her product range has expanded to include greeting cards, tote bags, table-cloths, decorative cushions, fridge magnets, brooches, pins and mugs. 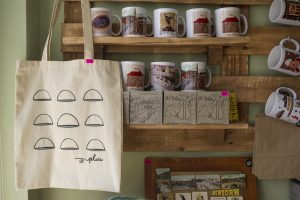 Lepaja felt it was necessary for a product to exist that celebrated Kosovo’s cultural past, as “many buildings were not preserved and as such I decided to use those images on my postcards,” explained Lepaja.

“The products are both creative and informative, as I thought it was necessary for tourists to acquire knowledge about our culture and country such as ‘Old Prishtina’, and be able to take something back to keep ,” Lepaja said.

She was able to expand her product collection after winning a grant from the EU for completing a three month training program, implemented by Riinvest Institute. Through this she invested in an embroidery machine: a long-term ambition of hers that was put on hold due to lack of finances.

The new collection featuring table cloths, tote bags, brooches and decorative pillows are made using the embroidery machine. The production is more time consuming, since embroidery requires considerable planning: selecting which illustrations are better suited to textile materials, and how to best preserve the quality of the product.

This year, Lepaja plans to focus mainly on embroidery and is currently testing textiles and designs with hopes to expand to online retail.

“I wish to collaborate with local innovative fashion designers that share the same passion in creating and experimenting as I do, and presenting it outside of Kosovo,” said Lepaja. 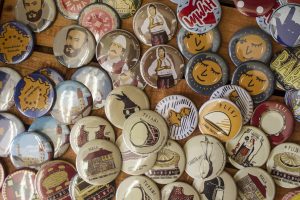 Lepaja heads her small business alone; she currently does not have any employees,as she professes to be a perfectionist and focuses on minute details.

“I have struggled to find employees that are committed to the same standards as I am, and more often than ever there are mistakes and defects. As such I work alone at the moment,” she said.

It is hard to work in the current business climate, as many replicate thriving businesses but hesitate to take risks, Lepaja explained. She herself embraces change and is “driven by the opportunity to be innovative in a hostile environment that tends to repeat itself, rather than evolve.”

“I have always been conscious of not doing the same thing that already exists, and others tend to follow suit by replicating what is already out there, as a safeguard for success. I prefer the opposite, as I thrive on being able to be innovative and take risks,” concluded Lepaja.

by Atdhe Mulla
Next: News