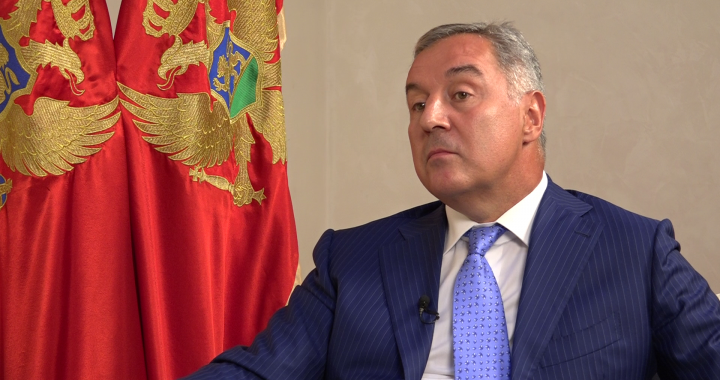 In a wide-ranging interview, Djukanovic spoke about the process of border demarcation with Kosovo, conditions for NATO accession, and the need for regional reconciliation.

Montenegrin Prime Minister Milo Djukanovic said that his country is not looking for “even one meter [of land] from the territory of Kosovo,” and that he is open for legal arbitration.

“We wait patiently and with good intentions” until the matter is resolved in Kosovo, he told BIRN Executive Director Jeta Xharra.

“We want to have good relations with all of our neighbors. We just want to make it clear that when certain political debates in any community happen, in this case in the Kosovo community, we understand the need to develop a spirited political debate. We always need to make sure that this dialogue does not ruin Kosovo’s relations with its neighbors. This is important.”

The border deal was signed by Montenegro and the Republic of Kosovo on August 26, 2015 in Vienna, and ratified by the Montenegrin Assembly on December 28, 2015.

However, the deal became contentious in Kosovo almost immediately after it was reached. It was not adopted by the Kosovo Parliament amid opposition protests, which escalated with teargas being set off in the assembly hall. Kosovo Prime Minister Isa Mustafa withdrew the draft law from the Assembly agenda on September 1, after being unable to whip the necessary votes from governing coalition MPs, including the Serbian List representatives.

Djukanovic said the experts who decided on the international border took into account opinions of the  Badinter Commission, which in the 1990s concluded that the demarcation of borders in the former Yugoslavia should be done in accordance with the Yugoslav administrative borders, as well as the Ahtisaari plan.

“We understand that there are some concerns from Kosovo’s side, and according to us, even if this might not be correct, this is due to some political arguments within Kosovo. We would want for this to be solved in a democratic manner, and we hope that this is what will happen and that the problem will be overcome.”

Montenegro received a green light for NATO accession in May 2016 and it is expected that the parliaments of all other members will vote positively on its membership by spring 2017.

Djukanovic said that formalizing the border with Kosovo is “not explicitly stated as a condition” for NATO membership, but that “good neighborly relations” are a prerequisite as well as “no open questions related to territorial disputes.” Montenegro still has not formalized its border with Croatia, which joined NATO in 2009.

“This was the part where the Yugoslav Army was positioned. The administrative border with Croatia has never been assigned. At some point during the first years, during the first months of the conflict between Yugoslav Army and Croatian Army, this was a conflict zone. Sometime after it, in the beginning of the 1990s, a temporary deal was reached. Since then there has been peace, there were no border conflicts.”

Djukanovic said both countries are close to submitting the question for international arbitration.

Djukanovic has been in power since 1991, for most of the time alternating between the roles of prime minister and president. He told BIRN that the reason for his longevity is the fact that that has visited “not only each municipality, but each village in each municipality.”

“I believe that you truly have to be dedicated, to try to establish good faith relationships with people…You know, in every community, especially in a small community like Montenegro with 650,000 citizens, you truly have not only a theoretical chance, but a practical one as well for each voter to meet the prime minister.”

Djukanovic says that his attempts to apologize for Montenegro’s misdeeds during the wars for Yugoslav succession, including the bombing of Dubrovnik, have not made him less popular with the electorate, and that it is imperative that regional leaders move forward in reconciling with their neighbors.

“Our logic was that we’re not a big country anyway, we can’t have that kind of influence in the region, but we think that through the power of setting a good example, even if we’re a small country, we can guide others and show that it’s possible to overcome problems. It’s possible to overcome the legacy of an era of bad relationships in the ‘90s, and to create conditions to repair these relationships and strengthen faith,” he said.

In 2000 Djukanovic held a meeting with the Croatian President at the time, Stjepan Mesic.

“I, at the time the President of Montenegro, considered this a civilized gesture, because citizens of Montenegro, wearing the uniforms of Yugoslav army, have definitely done certain things in the Croatian country, first of all in Dubrovnik and Konavlje, which were a burden on our relationship with Croatia. I’ve noticed that after this, the relationship between Montenegro and Croatia started to repair. I can say that today this relationship is exemplary.”

He said that while many constituents were surprised by his gesture, they supported it.

“I know that at the time there were many that looked at this apology, the one that I made in the meeting with President Mesic, with disbelief. But, my opinion is that the role of a statesman is to try to change the public opinion in the desired direction. So, I as a winner in the elections have won a mandate to do some actions that I believe will bring good things to my people and my country.”

According to Djukanovic, people often have good relationships with their immediate neighbors but do not always see the bigger picture.