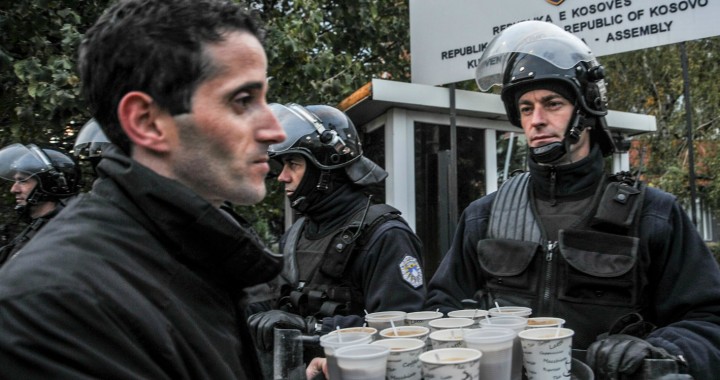 Regardless of how the border demarcation with Montenegro ends, the fierce clashes between the government and opposition will have long-term impact on the very principle of parliamentary democracy.

One day, the issue of the border demarcation between Kosovo and Montenegro will pass, as many other important public issues have until now. However, the political and social hostilities engendered during this process will continue to linger on.

For a year now, the public opinion has been terrorized by the denigrating rhetoric spewed by politicians. Prime Minister Isa Mustafa called his political opponents and critics ‘Malisheva ticks’ and said that they ‘graze Western funds.’ Leader of AAK Ramush Haradinaj called Murat Meha, chair of the government commission for the border demarcation and maintenance, a ‘pederast.’ He called Vetevendosje members ‘traitors’ and ‘spies,’ among others.

All of these statements, rather than attacking a position or an idea, are ad hominem assaults. Such attacks aim to eliminate the very being of the opponent. As soon as your being is attacked and you are deligitimized, whatever you might say after that has no value at all, however true it might be. In this political discourse, where your opponent is a tick, a traitor, and a terrorist, the confrontation of ideas and political positions is of no worth.

This political discourse within state institutions has a chain effect on the society. Political parties are not the only ones involved in this political confrontation. The police, judiciary, media, and every public institution has also been brought in. Political hostility creates social hostility.

Out of the whole confrontation, the Kosovo Police will suffer the greatest damage. This important public institution, which has suffered many scandals already , including the robbery of the evidence room, tender abuse, and even party influence exposed by “Pronto II,” is also losing reliability. Found between party control and accusations from the opposition, the police force now looks like an inept institution that is unable to uncover the most severe cases of political attacks. And when it carries out arrests and prepares case files for the court, they are deemed unacceptable due to lack of evidence.

How reliable can an institution that arrests journalists solely on the basis that they “resemble another person” be? Furthermore, after monthlong investigations, they pompously arrest opposition activists, dub them terrorists, and release those “terrorists” to defend themselves in freedom?! Considering all this, changes in the Kosovo Police command are very necessary.

This political confrontation has also delivered the coup de grâce to the credibility of RTK, the National Television Broadcaster. This public medium, which has fallen under party influence for many years and abuses tax money and tramples on the ethical and professional standards of reporting, is also found in the middle of a battle between the government and the opposition.

The recently published wiretapped phone conversations dubbed “Pronto II” provide a clear view of politically-influenced media bias and how the loss of a broadcaster’s independence also destroys its importance in the eyes of the people it serves. Adem Grabovci, former leader of the Democratic Party of Kosovo, PDK,  parliamentary group, was not satisfied with appearing on the title page of a daily newspaper several times. Despite this, everybody would be aware that he is given space there because that medium serves his party.

For this reason, he sought out other platforms. He understood that in order for his media presence to be of value, he needed to secure a platform at outlets that are not considered open supporters of his party. This fate is following him to RTK. As with the Kosovo Police, RTK also needs to undergo serious changes in management and funding. Otherwise, as a friend of mine said, the only way to escape the party propaganda of the public broadcaster is to let it lose its value entirely. But, such a devaluation will cost taxpayers at least 11 million euros per year.

But, what will suffer most from this confrontation, which has been going on since the last parliamentary elections, is the citizen’s trust in institutions and the election process. Low voter turnout always creates space for manipulation of election results. This crumbling of trust can be felt even now. Apart from being dissatisfied with governance, citizens are also dissatisfied with the opposition. The alternative to a corrupt and criminal government undoubtedly  should not be a party that throws Molotov cocktails at public institutions or that promises to “drag the corrupt on the ground” while disregarding the judicial system.

In a parliamentary democracy, differences in position between parties are necessary to balance the government and push political ideas forward. But, in cases where a confrontation of ideas turns into low personal attacks and threats that aim to dissolve the political being of the other, the fabric of democracy is torn.

Today in Kosovo we have two antagonized political sides which utilize every political and non-political means to eliminate one another. Elections are meaningless in a political division this large. Instead of having the possibility to choose political platforms, citizens would have the dilemma of choosing between enemies. Thus, it is important that this hate speech and political hostility end as soon as possible in order to pave the way to a genuine democratic debate.