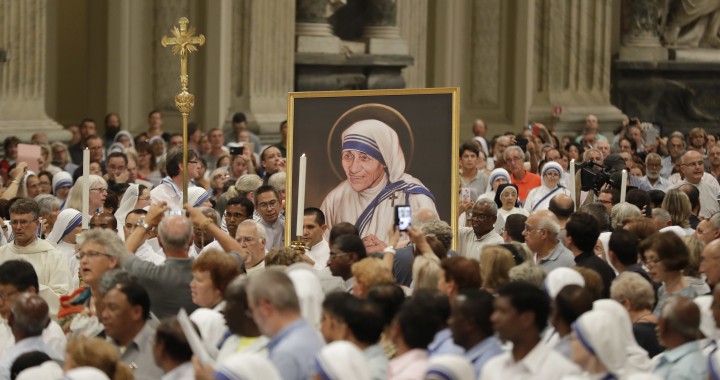 No, Mother Teresa, poverty is not beautiful

In Albanian lands, to be critical of Mother Teresa’s work and ideas amounts to national treason. But her views on abortion, homosexuality and especially poverty - should not be whitewashed.

When I was growing up in Kosovo, Mother Teresa was a global spokesperson for the world’s poor and destitute, a woman of such a saintly reputation that even to think of her as a person in flesh provoked thoughts of sacrilege. Her aura was so vast, her deeds so grand, her name never to be uttered in vain. When you saw her on TV, her stooped figure evoked sublime humility—a form of elemental representation of our humble place in the universe. When she gazed at something in the distance, she had the look of ages. How could one not be raptured at this ineffable sight?

More than that, I loved her because her angelic face bore a strong resemblance to that of my grandmother who was of the same age as Mother Teresa. In my childhood, both were faces that embodied pure kindness and compassion; faces that emanated unconditional love. Except that in my grandmother’s case, the blows of a hard life had knocked almost all the teeth out of her mouth—so that when she displayed her heartbreaking smile, you had an overwhelming feeling of pity for her. By contrast, when Mother Teresa smiled, there was just love and awe. No pity. Her smile radiated warmth and affection; and she missed no teeth, a testament of her access to the best healthcare money could buy. Perhaps.

Mother Teresa’s hallowed image lived with me, like it lived with millions of people. It made me proud that she was a child of our small nation, and the world adored her. But she came down from those stratospheric heights when I learned that she had her own flaws and beliefs, some of which I found deeply disturbing. As a deeply pious person, she had extreme views on abortion and use of contraception and was vocal against both. In her Nobel Prize speech, she suggested that abortion, not poverty, was a global catastrophe. “The greatest destroyer of peace today is abortion, because it is a direct war, a direct killing – direct murder by the mother herself,” she said. In the same speech, she referred to Jesus and God 37 times, but she uttered the word poverty only three times. In his book, “The Missionary Position: Mother Teresa in Theory and Practice,” the British author Christopher Hitchens catalogued her deeply conservative social views. For example, in a speech she gave in Washington DC, in 1989, she suggested, while referring to homosexuality, that AIDS was a just retribution for improper sexual conduct. In another speech in Ireland, she said, “…Let us never allow in this country a single abortion. And no contraceptives” (9:18).

But as discomforting as Mother Teresa’s global crusade against abortion and contraceptives was, I found her views on poverty the most troubling. She maintained that her work with the poor was not for the sake of work for the poor, but as an expression of divine devotion. In an interview for a BBC documentary, which made her famous, she said that,“There is always the danger that we may become only social workers or just do the work for the sake of work… It is a danger. Our works are only expression of love for Christ…The poorest of the poor are the means of expressing our love for the god.”

When, once she visited a poor corner of Washington DC where she wanted to build a charity center, people from the neighborhood told her they needed jobs that brought dignity, not charity. In the press conference she held that day, she was asked whether she teaches the poor “to endure their lot.” Mother Teresa answered: “I think it is very beautiful for the poor to accept their lot, to share it with the passion of Christ. I think the world is being much helped by the suffering of the poor people.”

The notion that poverty is a beautiful thing has Biblical roots, but the idea was revived during Medieval times when Saint Francis of Assisi, a famous Catholic preacher received a dreamy sermon from Jesus Christ in 1208. In that revelation, the saint was instructed to leave everything behind and embrace a life of poverty. And so he did and founded the Franciscan order of friars—a group of men who swore to poverty and sustained life by begging for charity. It was Francis of Assisi who most famously elevated the biblical notion that an impoverished life is a virtuous life and that there is beauty in suffering. It was clear then that Mother Teresa’s views on poverty were purely religious and had nothing to do with our secular understanding of the poor.

It is obvious that she ran charities and not poverty alleviation programs, but the underlying philosophical principles of that organization were based on pure dogma, which saw the poors’ lot as irreversible. This approach stands at odds with the humanistic and secular approach, which attempts to lift the poor out of poverty as opposed to nursing them in destitution or managing their downfall.

Mother Teresa’s views on poverty trickled down to the poor and the sick her charities served. Many observers who have visited her missions have reported on gross medical negligence, including Robin Fox, editor of “The Lancet,” one of the world’s top medical journals. Another major study from the University of Montreal in 2013  found even more disturbing trends. At the time of Mother Teresa’s death, her organization had over 500 missions around the world and the majority of the people who showed up sought relief from disease and pain, but there was little in the way of that. And it was not for lack of resources. Authors of the study suggested that the care for the dying and the sick was driven by the religious idea of glorifying the suffering of the poor.

Now, in Albanian lands, to be critical of Mother Teresa’s work and ideas amounts to national treason. In the wake of her canonization last weekend, it was impossible  to find any critical commentary in Albanian press or social media. That is partly because few people take the time to learn about her work. We suppress any thoughts or ideas that may tarnish our image of her. Critics and commentators become gullible and obsequious observers to the whims and fanfare stories peddled in the western media. But most of all, we may not even care much about her beliefs and ideas and how they represent the values of our society. Her canonization was a national event, one which we celebrated with joy and reverence and that is the way it should be. But we must not shy away from also talking critically about her work, her ideas, and her values. No one and nothing should ever be immune to reasonable criticism, be they gods, saints, people in flesh, or our own mothers.

Debating difficult questions is a hallmark of enlightened minds and they must not be seen as sacrilegious or insulting. For it is important to wonder if we would want someone like Mother Teresa to preside over our individual liberties. How many of us would agree with her crusade to restrict women’s rights and use of birth control? How many of us would think that poverty and the suffering of our one third of population is a beautiful thing? How is the misery of our fellow citizens good for the world? One wonders how it is possible in Mother Teresa’s view that it is beautiful to see a mother writhe her hands in agony as she watches her child waste away in starvation. What would Mother Teresa do if, somehow, she had a child of her own dying of hunger? Would that still be a beautiful sight for her?

These are questions that may have no practical use, but they are imperative in that they serve as an ethical map of our own values and beliefs. We must empathize and imagine sufferings beyond our own to be able to pass value judgement on those who reside in life’s darkest corners. To examine our flaws, to talk openly about our imperfections, including those of Mother Teresa, is not treason, but a manifestation of a strong collective moral conscience.