After PISA, a rural Kosovo school faces a new curriculum and the smell of bean stew

While the Ministry of Education, Science, and Technology promotes a new teaching methodology, schools in Kosovo are faced with more basic challenges.

A narrow pathway of semi-rotted trees leads to a hill overlooking the primary school of Muqibabe village, on Kosovo’s eastern border with Serbia, located deep in the mountains of the Gjilan municipality.

The Mulla Idriz Gjilani Primary School, built in 1982-83, is a wide building, weathered from time, and surrounded by mountains. Inside, separated by an improvised internal wall, the school contains two different worlds — that of knowledge and survival. While one half is used as a school by the Muqibabe village’s eight remaining students, the other half serves as living quarters for Vehid Ibrahimi’s family.

For more than four years, Ibrahimi has ‘usurped’ two of the school’s classrooms to serve as a living environment for his family, after an electric fire accident burned his home in 2013. Left without any options, the father of three broke into the school through the windows, seeing this as the only option to secure a roof over the heads of his family members.

“I have no salary,” Ibrahimi told Prishtina Insight. “I have been an unpaid [political] activist for twenty years. I don’t have the means to build a new home.”

The water from the school’s faucets is not drinkable. There are not even doors here. In winter, it is difficult to live because of the cold. Vehid Ibrahimi

Since the 1998-99 Kosovo War, Kosovo’s education, economic, and social welfare systems have struggled to provide basic needs for citizens.

In the 1990s, the Milosevic regime closed Albanian-language university and high schools, and ethnically segregated the primary schools. As a result, Kosovo Albanians organized parallel institutions in private homes, lacking proper facilities and even books. Even after the Kosovo War, the period of international administration, and Kosovo’s independence, governmental attempts to rebuild the education system have failed to materialize into any concrete improvements, best illustrated by Kosovo students’ low scores in the 2015 PISA, the Programme for International Student Assessment, test. 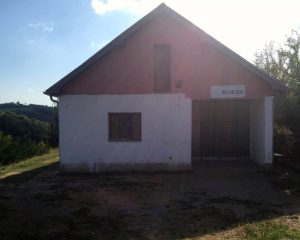 Walking inside the school building, the hallways smell of suxhuk and stew. After we take our shoes off, as is customary before entering homes in Kosovo, our socks step on a rug with blue and yellow flowers.

“I don’t have the means to live as one should,” said Ibrahimi.

“Here I don’t even have a bathroom or drinking water — the water from the school’s faucets is not drinkable. There are not even doors here. In winter, it is difficult to live because of the cold, since this is a very large space,” he continued, describing his improvised living space of about 20 square meters.

Flames wave inside the wood-burning stove — wood that Ibrahim cuts from the nearby forest visible from his fragile windows, which barely manage to keep the cold wind out. The tablecloth with red and white squares barely conceals the fact that the table is nothing more than two school desks. It is surrounded by four chairs, also borrowed from the school.

The father of three said that his squatting at the village’s school was prevented neither by Gjilan’s officials nor by the Ministry of Education. Gjilan’s municipal director of education was even informed about his situation, he said.

“I was in contact with him many times,” said Ibrahimi. “I informed him, and he knew about my condition. He believed that Gjilan’s Municipal Assembly would find a solution for me soon. I did not know that it would be this long, four, five years, living inside a school.”

Ibrahimi said that there has not been any new solution for his family’s accommodation.

“Nothing happened,” said Ibrahimi. “The residents of Muqibabe made requests to Gjilan’s Mayor, Lutfi Haziri, three or four times. They gathered signatures to help me, so that a house could be built for me in the village. And nothing has happened.”

Across from where the family lives, a separate gate serves as an entrance to the school. The hallway and the classrooms are considerably colder compared to the heat radiating from Ibrahim’s stove. The doors to the small classrooms that accommodate a maximum of ten students do not close, risking that they might fall off their hinges each time air flows through them. 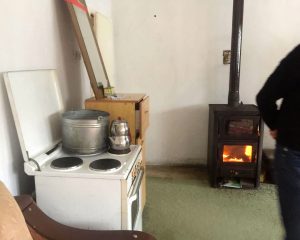 Even though only an improvised wooden wall separates the students from Ibrahimi’s family, they seem worlds apart.

“If there’s a class in progress,” said Ibrahimi, “I, personally, leave the school, go out into the nearby woods. Listening to them is a problem, it’s a loud noise.”

On the other hand, the school officials also have their complaints.

“His very presence in the school presents an obstacle,” said Fatmir Latifi, the school’s principal. “He cooks, bakes, grills, and those smells are there non-stop; they get into the school’s hallways … the whole school gets overwhelmed by the smells, like the smell of cooking beans, onions. And that in itself is an obstacle.”

According to Latifi, the Ibrahimis also use the other parts of the school. “He also uses the bathrooms, which are outside the school building and are intended for the students,” said Latifi, adding that the school pays the family’s electricity costs.

Bardhyl Syla, the municipal director of education, said that even after four years, there has been no chance to come up with a better solution for the Ibrahimi family. He even considers that their settlement on the school property does not present any difficulties to the continuation of the teaching process.

“I believe that the municipality will very soon take care of the housing situation for this family, in this way freeing up the school building,” said Syla.

In the latest test held in 2015, Kosovo ranked last in the Balkans, last in Europe, and third place from the bottom among 72 countries that participated from all over the world.

We are concerned about the fact that the teachers are not well prepared to implement the new curriculum. Besa Shahini

Former Minister of Education Arsim Bajrami promised that with the implementation of a new curriculum, Kosovo’s PISA results would drastically improve by the end of his mandate.

However, civil society representatives consider his efforts to be a political facade.

“We are concerned about the fact that the teachers are not well prepared to implement the new curriculum,” said Besa Shahini, formerly the head of Education Plenum NGO, who will now serve as deputy education minister in Albania’s government. “The new curriculum lacks the necessary school books for the students as well as for the teachers, and as such could not give better results than the existing curriculum, which we used until now.”

On September 4, schools throughout Kosovo opened their doors for the start of the new school year — a time which also brought a new minister of education and could potentially bring a new Gjilan Mayor, with local elections coming up. The Mulla Idriz Gjilani School, in addition to the difficult conditions, the small number of students, and the settlement of the Ibrahimi family in the school building, is also faced with the challenge of implementing the new curriculum.

However, the school’s principal, Fatmir Latifi, and a teacher, Avni Maliqi, do not consider it to be a problem.

“We are starting to prepare for it. It must be applied the same way, no matter if there is only one student or ten of them. We will work with the conditions we have,” said Maliqi, somehow relieved that he was not again asked about the Ibrahimi family living inside the Muqibabe school.