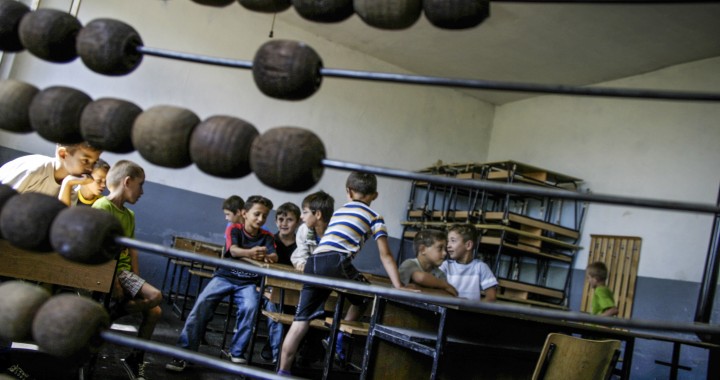 Kosovo’s education system amongst worst in the world

New educational assessment results from PISA rank Kosovo as one of the countries with lowest performance in math, science, and reading, trailing behind its regional counterparts.

In its first year of participation, Kosovo is ranked as one of the last three countries among the 72 that took the PISA test in 2015.

PISA, The Programme for International Student Assessment, organized by the Organization for Economic Co-operation and Development, OECD, tests 15-year-old students from participating countries in sciences, math, and reading. The results, published on Tuesday in Paris by OECD General Secretary Angel Gurria, reveal that Kosovo scored very low in the three categories.

Singapore is the top country on the list in all three categories. The only countries that scored lower than Kosovo were Algeria and the Dominican Republic.

Kosovo, together with neighbouring countries such as Montenegro, Macedonia, and Albania, is among the countries that have a mean share of top performers below the OECD average. Together with Peru, Lebanon, Tunisia, Macedonia, Algeria, and Dominican Republic, Kosovo scored less than 400 points. Kosovo scored only 378 in sciences, the category of focus for PISA 2015.

Andreas Schleicher, the Division Head and Coordinator of OECD-PISA, said that it is problematic that the most disadvantaged students in some countries scored higher than the most privileged students of Kosovo.

Still, Scheicher said, quick improvement is possible. “In 2001, Brazil was the lowest performing country in PISA. It caused a shock, but since then Brazil became one of the fastest improving education systems around the world,” he said.

Is there hope for improvement?

Minister of Education Arsim Bajrami held a public event on December 6 for the publication of the PISA results for Kosovo.

“Kosovo accepts the results and is not going to contest them,” Minister Bajrami said.

He considers the Kosovo government’s decision in 2013 to participate in PISA as a positive one. “It was a courageous act as well as a commitment to increase the quality of education in our country.”

Minister Bajrami said that “the results are not unexpected, they are within our expectations.”

He seemed optimistic about improving the system with recent reforms. “In 2018, when the results of our work can be seen, we will be comparable with European countries,” Bajrami said during the publication event in Prishtina.

He said that reforms in different fields such as text books revision, curricula revision, and a new system of teacher evaluation are underway in Kosovo.

Teachers seen as the key factor

According to PISA officials, teachers are key to improving the quality of education in general.

“Teachers need to be empowered to lead this transformation; but that can only happen when they know what is expected of them – and when they get the support they need to teach effectively,” explained Schleicher.

Minister Bajrami also emphasized the importance of teachers, appealing to them to “accept the transition from a classic teacher to a modern one with affability, meaning that they must be open to the newest technology of information.”

Jens Grosspietsch, the headmaster of a Berlin school in Moabit, the poorest quarter in the city, is known for implementing a complete turnaround for his school’s performance. He argues that socio-economic status and the school budget is not as important as the quality of teachers.

“I was part of a school that had more or less the same situation as the majority of schools in Kosovo: disadvantaged students, teachers that gave up, weak management and social neglect, even bullying and violence,” Grosspietsch told PI. He sees “good management and inclusive teachers” as the key to success. “Select your teachers carefully. Their attitude towards pupils is important. Disconnect yourself from staff who do not agree on joint decisions.”

Whether or not Kosovo’s Ministry of Education reforms will lead to positive results remains to be seen. For now, Kosovo has reason to raise alarm regarding its education standards, especially if Schleicher’s statement is true: “Your school system today is your economy and society tomorrow.”