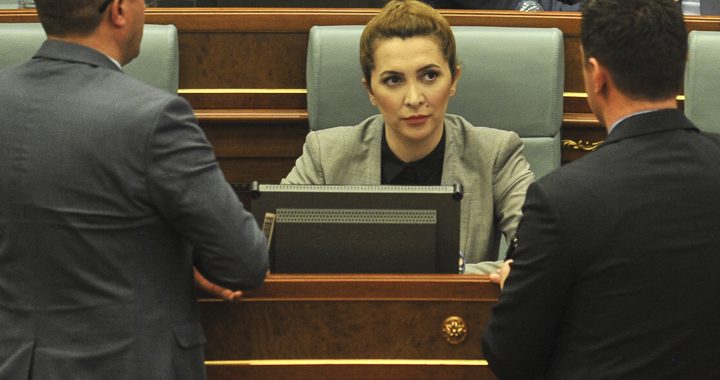 Two days of discussions at the extraordinary Kosovo Assembly session on air pollution concluded with a 19-point resolution.

Kadri Veseli, Assembly Speaker and initiator of the session, said that citizen interest should be put in front of party interest.

“This session should unite us,” he said. And so it did: the resolution was proposed by all parliamentary groups except Srpska Lista.

But although they all seemed to agree on the urgency of the matter, Kosovo MPs took their time in sermoning one after another. Indeed, it took them two days to discuss the uncontroversial resolution.

Speaking on behalf of Vetevendosje’s parliamentary group, Dardan Sejdiu proposed five policies to counter this problem, and they were integrated in the document. One of them was the purchasing of intelligent artificial trees that clean the air.

On behalf of her party, LDK MP Besa Gaxherri proposed that the central heating grid should be expanded, which was also added to the resolution.

Afterwards, PDK MP Evgjeni Thaci spoke in the name of PDK, expressing criticism for the previous government by saying that “citizens have been raising their voice about this problem for a long time, but nobody heard them,” she said. “Temporary measures are essential, as are long-term policies, and citizens, especially younger generations, need to become more aware,” she proposed.

Representing AAK’s parliamentary group, MP Ahmet Isufi mentioned priorities that should be endorsed by the government and environmentalist organizations alike for mitigating pollution.

“One element that should be prioritized by the government and environmentalist organizations is green spaces. There should be a wider investigation on the possibilities of investing in alternative energy,” he said.

In his five-minute long speech, Nisma’s Bilall Sherifi said that pollution cannot be overcome by talking.

“We approve a resolution and go home, but the pollution continues. We need long-term policies,” he said.

Minister of Environment Albena Reshitaj said that fighting pollution has been a priority for her since she became minister.

“With my request, the government formed a task force that will deal with the reduction of pollution,” she said.

Meanwhile PDK’s Nait Hasani retorted, saying that task forces and councils do not solve the problem. He referenced Winston Churchill to supplement his argument.

“Churchill said that if you do not want to solve problems, then form councils. So, these councils that you have formed will not solve problems, solving problems starts directly and spontaneously through commitment, and not through councils. If you apply the law, all problems are solved,” he said.

Reshitaj answered Hasani’s requests for action by saying that there is no time for experimentation.

“Dear Mr. Hasani, we have made the laws, analyzed them for years and wasted a lot of time saying that we are analyzing them. Today, we do not have any more time to experiment with laws, I think we have the laws, the legal framework can optimally function 85 per cent,” she said.

In the second part of the session, Alternativa’s Mimoza Kusari-Lila said that MPs do not have enough credibility to talk about polluted air, because according to her, they pollute the air within Assembly spaces by smoking cigarettes in cafeterias and offices.

“In the Assembly, our common space is polluted every day by illegal smoking. What we are doing right now is absurd, it can be taken as advice by the minister or government, but we lost the credibility to talk about clean air while we spend time in a contaminated space up there, and as long as I can feel it in the hallways of the parliament, some even break the smoking law in offices,” Kusari-Lila said.

“If we listen carefully to all MPs today and yesterday, to me it looks more like some kind of science symposium, more than a representative political institution. Yesterday I started feeling inferior beside all the experts, I never knew that our Assembly has so many environmental experts. I am sure that even international forums envy us when they talk about global warming and the environment,” he said.

Vetevendosje’s Adem Mikullovci, the oldest MP, said that the discussions were useless because, according to him, it has been this way before, just a little more severe now.

Mikullovci also used a proverb to explain the situation.

“These discussions today and yesterday are welcome, but they are almost completely useless because nothing can be done for now. A Turkish proverb says ‘arbain-en soni, hamsin-en oni,’ which means that the air is worse and the winter is tougher around this time of the year,” he said.

PDK’s Xhavit Haliti said that the pollution of air in Prishtina during winter is nothing new.

“The way the discussion is going gives the impression that nobody lived in Prishtina before and nobody knows the situation. Whoever lived or studied in Prishtina knows that when there was fog and it was cold, there was always the same situation. It is no worse than how it was in the ‘70s or ‘80s,” Haliti said.

LDK’s Lumir Abdixhiku said that the issues of pollution is very troubling. He proposed a national break from work and school, but his proposal was not added to the resolution.

He considered pollution from power plants to be the elephant in the room.

“We need to address the elephant in the room, KEK [Kosovo’s Energy Corporation] as the biggest polluter. Without termination Kosovo A as the greatest polluter that is located only three kilometers away from Prishtina, there will be no improvement.”

Albena Reshitaj agreed, saying that the termination of Kosovo A is part of the mid-term governmental plan.

Sami Kurteshi, Vetevendosje MP and former Ombudsman, said that the institution that he used to lead issued warnings for at least seven years, but nobody gave them any regard.

“Last year, the value [PM2.5 concentration] mentioned today was 430, higher than this year, but thank god the US embassy is here and we are strong allies, because when they scold us we act like chickens and take everything seriously,” he said sarcastically.

The speakers agreed that vehicles do contribute to pollution.

“We have cars, buses and semis that move freely in our streets despite the fact that they should be sold as scrap metal,” independent MP Korab Sejdiu said.

The only ones who did not talk during this session were Srpska Lista MPs, who were criticized by AKR’s Labinot Tahiri.

“If pollution is of concern to us in Prishtina or Kosovo, they should also participate in these extraordinary sessions, or they [Srpska Lista] do not sympathize with citizens of the Serb community,” he said.

The two-day debate drew to a close with a proposed 19-point resolution.The first clause of the resolution states that “environmental protection should become a state priority of the government of the Republic of Kosovo.”

But, considering that resolutions are not legally-binding, the last clause also warns the government that if it does not implement the measures proposed by the parliament, MPs will initiate constitutional changes to enforce their proposals.

“If the Government of Kosovo does not apply the proposed measures, the Kosovo Assembly will begin procedures to change Article 52 of the Kosovo Constitution, so that the right to clean air and water be included as basic human right guaranteed by the constitution,” the resolution writes.

This was LDK MP Vjosa Osmani’s proposal, who said that if these recommendations are not applied within six months, she will gather 40 signatures to initiate constitutional changes.