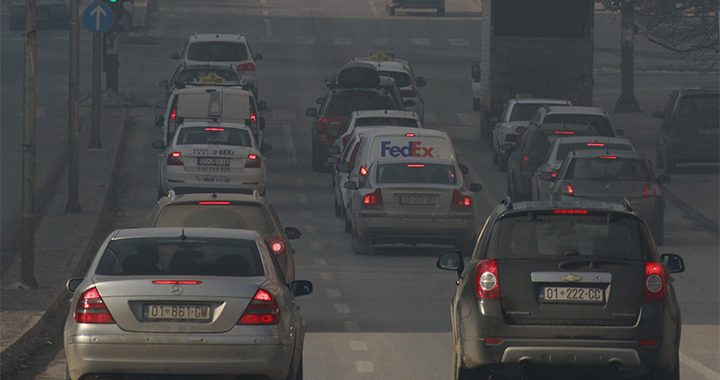 Photo: Atdhe Mulla, taken one day before Prishtina announced a ban on vehicular traffic in the city center.

Emergency measures were lifted Thursday evening, less than two days after the municipality introduced a ban on personal vehicular traffic in the city center to combat air pollution.

Less than 48 hours after the Municipality of Prishtina introduced its emergency plan to tackle high levels of air pollution in the city, the official Facebook page of the municipality informed citizens that the ban had been lifted.

In a short press statement, the municipality announced that the vehicle ban for the central zone of the city, enforced on Wednesday and Thursday, would be lifted because the air quality had improved.

“At the moment, according to the measuring equipment referred to in the previous decision, the Air Quality Index, AQI, has fallen below 61,” the statement reads. The AQI levels, measured by the Environmental Protection Agency at the US Embassy in Prishtina,  indicated ‘Moderate’ air pollution at the time of the municipality’s decision.

“Considering this fact, the Municipality of Prishtina has decided to lift the measure banning vehicle circulation in Zone Center from 6:00 pm tonight [Thursday],” the municipality announced.

The vehicle ban was introduced on Wednesday, after air quality data, which is published regularly online, showed that the air pollution had reached ‘hazardous’ levels for several days last week. Alarmed, residents organized an impromptu protest on Wednesday, demanding a solution to the persistent issue.

The Ministry of Environment and Spatial Planning has established a task force to deal with the urgent matter, while the Municipality of Prishtina also banned the sale of coal used for heating in private houses and businesses in the city, a ban that is still in force.