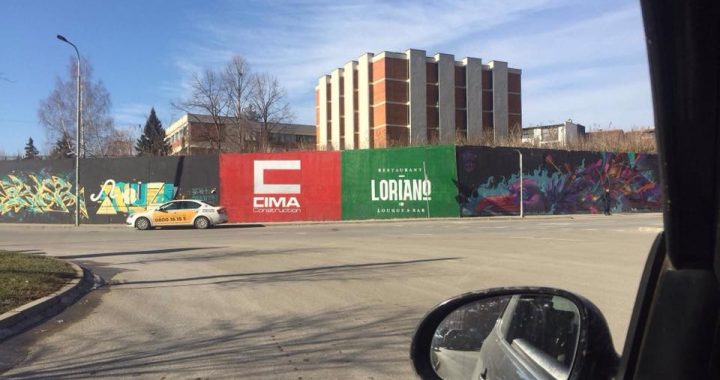 The Municipality of Prishtina pressed charges against two advertisements placed over murals along Rruga B and called on companies to respect public art.

Kosovo businesses Cima Construction and Restaurant Loriano each received a 300-euro fine after placing advertisements over murals along Rruga B in Prishtina.  Additionally, the Municipality of Prishtina covered the ads in black paint.

In a Facebook post, Prishtina Mayor Shpend Ahmeti said that the businesses should receive “public shame,” and warned that charges will be pressed against those who place any other advertisements at the same spot.

“I am displaying their names as a message that you do not do a favor for anybody by working against the law and order and against art. I also warn others that we will press charges,” he said.

Fans of the murals, painted last year during the first edition of Meeting of Styles festival, which gathered over 60 artists from Europe, the US and the Balkans, quickly took to Facebook to shame the companies.

In a Facebook post, Ardian Berisha, member of the municipal assembly, announced that ratings on Loriano Restaurant’s page dropped after the incident.

“We witnessed active citizenship these days, and that is the most important thing for us as a society! In 30 minutes, Restaurant Loriano’s rating dropped from 4.9 to 3.1,” Berisha said. The social media manager of the page has since removed the review option.

Yll Rugova, director of Culture, Youth and Sports at the municipality of Prishtina, said that the companies did not receive permission from his directorate for the placement of their ads.

“The procedures require such advertisements to receive consent from our directorate, something that has not happened according to our data. Other institutions are responsible for finding the perpetrators and punishing them,” he said. “We will soon announce a call for art in public spaces in order to encourage mural and graffiti artists to develop new projects similar to the one at Rruga B.”

Addressing citizens, Rruga B residents, and art lovers, Both Cima Construction and Restaurant Loriano issued letters of apology, saying that they are deeply affected by the damage done to the art.

“Cima Construction has never been in favor of damaging murals or public property. Our managers made an inconsiderate act, regardless of it having good or bad aims for Cima Construction’s image, and made a big mistake.” Restaurant Loriano issued the exact same statement in their own name.

In a press release, the Center for Art Development, Q’art, expressed concern over the degradation of art in public spaces, proposing recommendations to the municipality to avoid the damaging of art at Rruga B.

“As the only organization that has so far been able to intervene in public space, Q’art has continuously raised its voice against the domination of advertisements in public spaces, which has been chaotic and without any criteria up to now,” the press release said.

The three recommendations propose that the wall at Rruga B be protected from advertisements and other damage, that businesses should be fined and the money used to fund other works of art in that area, and the signing of a memorandum between Q’art and the municipality to revitalize public spaces.

Q’art is also planning a second edition of the mural festival, which will be held between May 18-20, 2018.