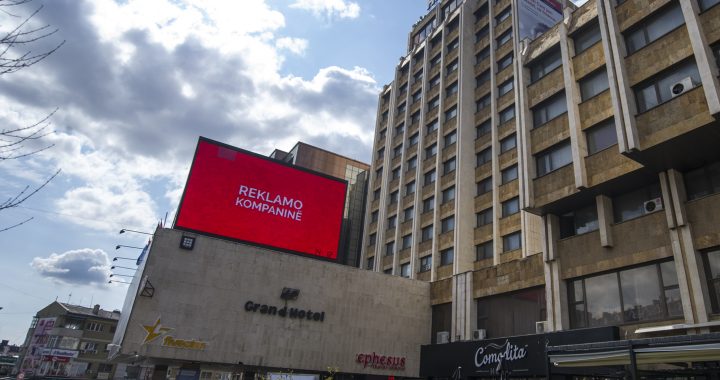 Kosovo’s capital has become overrun by commercial marketing and ideological branding, with public space being abused to promote consumer culture.

On a breezy spring morning, Prishtina residents woke up to a surprise. There was a huge and empty Nike shoe box in the middle of the Zahir Pajaziti square at the plateau usually occupied by children who have made the city’s marble pedestrian zone their park. The box itself was not a surprise – but the graffiti on it was novel.

While vandalism of the city’s walls is not uncommon, it is mostly advertisements that vandalize Prishtina’s public space. Indeed, the city by now is so chaotic that it looks like a rag worn out by your sibling – thrown dirty in the hallway, tired, dull and most likely with an identity crisis.

The city’s main boulevard, Nene Tereza, is the ultimate example of the city as a commercialized dystopia: it is a constellation of products, a variety of ideas packaged and served right in front of your face. From a giant advertising screen placed on Grand Hotel, to a statue of a muscular man carrying heavy guns symbolizing the branding of the nation, and now the red Nike box, the pedestrian zone causes the crazed feeling of a sugar rush, except it leaves you with a rather bitter taste.

It is not only the square that has been used for commercial lobbying and experimenting. Marketing has been using all its cards for creativity and outreach. This goes beyond simple product marketing. Downtown Prishtina has become utterly commercialized; you are badgered by ads in every inch of public space. These are the only means to encourage consumer culture; if you’re not part of the cycle, you’re spatially, socially segregated.

Nike’s extra-dimensional box, settled in the square to advertise for “Nike Air Max Day,” exemplifies how commercial marketers build monuments that usurp public space. In a globalized world, Kosovo was also part of Nike’s campaign, however excluded it might be from the EU or the UN. The space where the box was standing for a couple of days is one of the very few spaces in the center that citizens use to play and to hang out. It is a space that when one is in search for sun and under the pressure of selecting the right cafe, one can find comfort, sitting down on its steps for a minute or two. These very rare spaces in Prishtina serve as social spaces that bring people together either by choice or by necessity. If there seems to be a distance in the interaction between people, that geographical space imposes a sort of casual get-together that is very much needed in a hyper, never resting square.

Prishtina’s public space is a typical case of aggressive marketing that has been shoved down our throats. This marketing strategy measures success by how far you, as a project of capitalism, are entangled in the processes of commercialism and branding.

But this is nothing new: ProCredit Bank puts advertisements at the Philosophical Faculty and the Swiss Diamond decorated parts of the Nene Tereza boulevard for Christmas, though not a single tiny light failed to remind us that the hotel’s dollars paid for it. Worse still, various misogynistic billboards advertise business such as Emerald Hotel and the Schweppes Company.

Additionally, installations and structures that are not purely commercial in purpose also try to sell their own ideologies by obstructing the use of communal space by the city’s residents as a place to gather and move freely.

The Newborn monument–which was built and dropped into an already established landmark–heralds the ‘birth of a nation.’ There has not been any clarity around the decision to situate the monument where it is, a public space that already has a history of its own and represents a particular era. Boro and Ramiz Hall (now the Palace of Youth and Sport) used to be a landmark giving Prishtina a distinguished look and commemorating the story of two communists’ brotherly love.  It symbolized a sense of collectivity and familiarity, as its construction was paid by residents. It was a huge social center that was used by the city’s residents to buy goods, attend concerts and sports events, or to simply gather. Having Newborn stand right in front of the entrance feels as if it is suffocating the memories of the Boro-Ramiz building of that time and forcibly installing a new landmark for a new era.

In a similar vein, a bright yellow Lego art piece named “LetGo EU” was placed in the Skanderbeg square for Europe Day last year.  A work supported by the Ministry of European Integration, civil society and media representatives, it has been occupying a central part of the pedestrian zone since last May. The main goal of this big Lego brick was to symbolize the difficulties of Kosovo’s EU integration, and in a bizarre way, to promote recognition through, well… a Lego piece. The Lego is meant to represent Kosovo’s absence in the European Union, and how the union cannot be complete without it. It was supposed to be removed in July, but it has yet to find a home. It too stands in the middle of two major central squares (Skanderbeg and Ibrahim Rugova) where a year ago thousands of protesters set up camp.

What all these cases have in common is the utilization of the brand and credibility of the power they represent in reclaiming the space which, in theory, should be interactive and belong to citizens for everyday use.

The injustice done to the space by the brutal means of claiming it as ‘property’ by banks and corporations for their own uses and profit has not gone unnoticed, but also has not been silenced. It is a bit paradoxical, as all of these ‘monumental’ 3D concepts aim to appear as resurrection for creativity and interaction, and at the end of the day are doing the opposite. The space for freedom and creativity is not a privilege to be given, it is a right. By placing an advertisement box in a frequented location, that right is taken away. The right to oppose what is unjust is somewhat pushed into a pit of denial.

All in all, public conversations have started to become more common about who is using what part of the space that everybody has a share of. No space can feel familiar when residents don’t take part in nourishing it. Memories and relationships will fade if they’re not restored and taken care of. If the city center is not cherished by its people, it will become a space nobody has a memory of or a familiar feeling for, and then it will be far too late to complain.