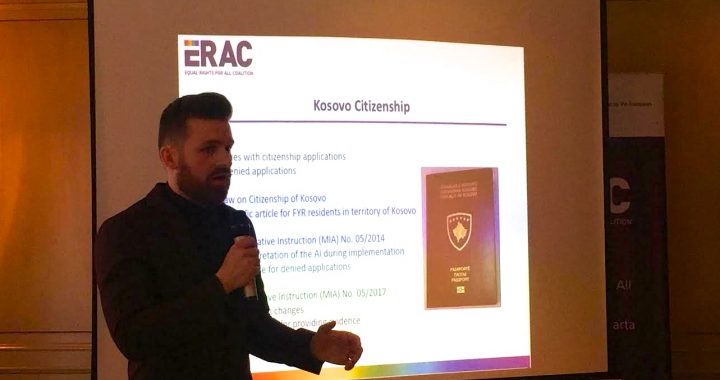 A new draft report published by the Equal Rights for All Coalition argues that Kosovo authorities should prioritize civil registry procedures for minorities.

As Kosovo institutions further extend their reach in the north, the everyday relevance of Kosovo documents for northern residents will increase, and Kosovo authorities must ensure easy civil registry procedures, a new draft report argues.

The draft report, titled “The People In Between,” was published by the European Centre for Minority Issues Kosovo as part of the Equal Rights for All Coalition, ERAC, a group of seven NGOs dealing with rule of law and human rights issues.

The draft estimates that about 8,000 residents of the four northern Serb-majority municipalities are employed in Serbian parallel structures, especially health care and education, and that around 90,000 people benefit from their services.

Mirroring earlier investigations by Prishtina Insight, the draft report takes issue with Kosovo’s ban on passports and IDs cards issued by Serbia for localities physically in Kosovo. The ban, according to the report, affects Serbs and other minorities, such as Roma living in South Mitrovica and Gorani living in Dragas.

The draft report also reaffirms Prishtina Insight’s earlier reports on the barriers Kosovo Serbs face to getting documents due to poor implementation of the Law on Citizenship and unsolved political issues between Kosovo and Serbia.

An example illustrating the issue, according to the draft report, is the incident of July 2017 at the Dheu i Bardhe border crossing, when Kosovo Police confiscated 918 Serbian health cards intended for holders of coordination directorate passports or Serbian ID cards issued to Kosovo residents. The cards had “the Municipality of Gjilan, Serbia” written on them, in clear defiance of the constitutional order in Kosovo, which declared independence from Serbia in 2008.

Holders of these documents, which the Serbian Coordination Directorate and Police Directorates have administered since 2009 to Serbian citizens residing in Kosovo, are not included within Serbia’s visa-free regime for the Schengen zone.

The 2011 Brussels-facilitated Agreement on Freedom of Movement intended to allow citizens to pass freely through Kosovo and Serbia with ID cards. But starting in Spring of last year, Kosovo authorities barred holders of these ‘coordination directorate’ and ‘police coordinate’ passports and ID cards from crossing its borders, even into Serbia.

At the presentation of the ERAC draft report on Thursday, Kosovo Ombudsperson Hilmi Jashari said that his office is reviewing cases of persons who claim they were unjustly denied their Kosovo citizenship, and that the lengthy complaint process in the courts lacks “effective controls” and is “a burden… and a very complicated process.”

Participants at the draft report presentation also spoke about the need to create a system of mutual recognition of all certificates of marriage, divorce, and death.

“If I’m in Kosovo I’m not married, but in Serbia, I am,” quipped Davor Petkovic, Deputy Mayor of Ranilug, before adding seriously that the international community should have a major role of solving such problems.

Snezana Karadzic, community advisor to the Minister of Community and Return, said that straightforward civil registry procedures are crucial, especially for displaced persons and returnees.

“This represents the most important part of society; it is about freedom of movement of citizens… but in many cases this is dependent on political will and is part of political agreements,” she said.

The ERAC draft report emphasizes that Kosovo’s citizenship regime upholds the right to dual citizenship, and that this was designed specifically with Kosovo Serbs, and their right to easily access both Kosovo and Serbian citizenship, in mind.

“However, this is not the case so far and is unlikely to change if the political disputes between Kosovo and Serbia remain,” the draft report states.

“The crux of the problem is that Kosovo law does not consider passports or ID cards issued by the Coordination Directorate and Police Directorates as equal to official Serbian passports and IDs. In fact, these documents are not covered by the Kosovo citizenship law as they do claim that Kosovo is a part of Serbia.”