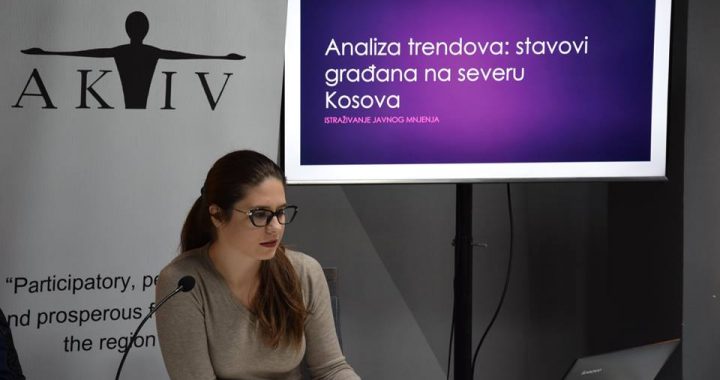 Most Serbs in northern Kosovo feel insecure and do not believe that the Brussels-facilitated dialogue has improved the rights and freedoms of their community, according to a new report.

“People believe that life for Serbs in Kosovo will become worse in three years, and this is especially true for highly educated people,” Milica Andric, head of NGO Aktiv’s policy section, said at the report’s launch.

“We’ve seen a very serious negative trend regarding support for the EU… the main reason being the belief that the EU takes Kosovo’s side in the Brussels-facilitated dialogue.”

The report, launched in North Mitrovica on Tuesday, is based on face-to-face surveys with 800 respondents and four focus groups in the four northern Serb-majority municipalities, as well as six in-depth interviews with government officials and political analysts, all conducted during summer 2017.

The largest recorded negative trend was related to perceptions of the overall security situation in northern Kosovo; about 52 per cent of respondents thought that the security situation deteriorated in the last year, which was a 38 per cent increase since 2016. Focus group participants suggested that media reporting on France’s rejection of a Serbian-issued international warrant for Ramush Haradinaj, the ‘train incident,’ and the wall erected in North Mitrovica contributed to high perceptions of insecurity.

Most respondents said that they trust neither Serb nor Albanian politicians. 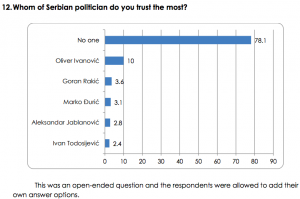 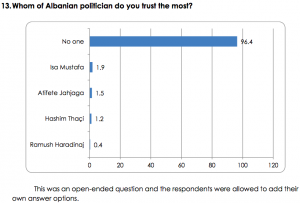 The report suggests that some explanatory factors for participant responses could be changes to telecommunications in the north resulting from the agreement on the Kosovo country code, as well as recent barriers to free movement. 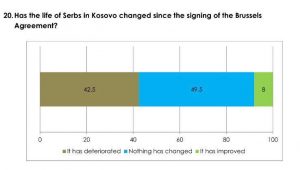 “This trend was explained by the progress in the legal and administrative integration of northern Kosovo into the constitutional and legal framework of Kosovo, a process which the citizens in the North perceive as imposed and unwanted,” the report states.