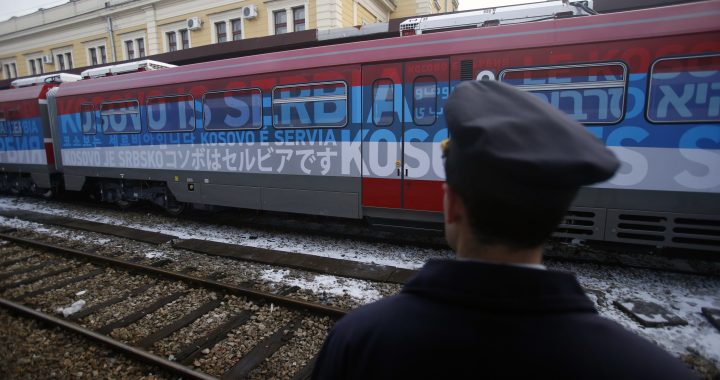 Serbia has launched a railway link to Serb-dominated northern Kosovo despite protests from authorities in Prisjtina who described the move as a provocation. | Photo: Darko Vojinovic, Beta

A new train connecting Belgrade to North Mitrovica, wrapped in posters proclaiming “Kosovo is Serbia” in over 20 languages, failed to reach its destination on Saturday.

A train covered with Serbian political and religious symbols, scheduled to travel from Belgrade to North Mitrovica today, and launched with fanfare by Marko Djuric, the director of Serbia’s ‘Office for Kosovo and Metohija,’ failed to reach its destination.

The train which began its journey in the morning, was stopped at 4 pm in Raska, Serbia before reaching the Jarinje border where special units of Kosovo Police had been deployed. Kosovo government opposed the train, claiming it was a provocation of the Serbian government.

The train is wrapped in banners proclaiming “Kosovo is Serbia” in over 20 different languages, including Albanian, while the interior is adorned with Serbian Orthodox icons. Djuric proclaimed it to be a train promoting Serbia’s UNESCO-protected heritage.

The train will reportedly not enter Kosovo due to security reasons. The ticketed passengers were waiting for a bus to transport them.

U.S. Ambassador to Kosovo Greg Delawie expressed his concerns for the situation as citizens and civil society activists called for the Kosovo government to stop the train before entering.

A group of people also gathered in front of the government building in Prishtina to protest the train’s arrival, but the crowd dispersed after half an hour when it became clear that the train was not going to continue further than Raska, 10 km from Kosovo-Serbia border, tonight.

Concerned about train issue. Call for restraint from all parties. Need normalization not confrontation. #Kosovo

In a Facebook post, President Hashim Thaci said that the train cannot be allowed to enter Kosovo because “a train with slogans in opposition to the Kosovo Constitution and laws is completely unacceptable.” He also noted that  people who are banned from entering Kosovar soil are travelling on the train.

Serbian media reported that Marko Djuric, director of the government office for Kosovo, was also travelling on the train.

The Kosovo government, in cooperation with the Kosovo Railways Infrastructure, said they had ordered for the train to be stopped seeing that it was illegal and had no permit to enter Kosovo soil.

European Union spokeswoman Maja Kocijancic told PI that the EU-mediated dialogue is the best forum for these issues to be resolved.

“Any issue of mutual concern needs to be discussed between the sides in the spirit of normalising their relations,” said Kocijancic. “The forum to discuss these is the dialogue. A constructive engagement in the dialogue is a an essential prerequisite for both sides to advance on their respective paths to the EU.”

In an extraordinary press conference Serbian Prime Minister Aleksandar Vucic  said that he ordered that the train be stopped due “to security issues” and “for the safety of the passengers.” He accused special units of the Kosovo Police of placing mines on the railway on Kosovo’s side.

“The special units [of the Kosovo Police] ROSU aimed to place mines on the railway,” Vucic said. He said that he will inform all global leaders of the situation and warned Kosovo Albanians.

“Serbia wants peace and will do everything to maintain peace. But this is my last appeal and warning for Albanians in Kosovo to stop their attempts to attack the Serbian people with weapons in Kosovo because Serbia will not allow that. This is our message to the international community,” he said.

Kosovo’s Prime Minister Isa Mustafa on the other hand said that the decision to turn the train back was the right action.

“It is illegal for [the train] to enter the independent and sovereign Republic of Kosovo. If it entered, it would be treated according to Kosovo laws,” said Mustafa in a press conference Saturday evening.
“The Republic of Kosovo is committed to contribute to the free movement of citizens, to actualize the deals that are to do with the rights of citizens, but will not allow such provocation that aim to take Kosovo and the region back to the dark days of unpredictable conflict.”

A previous version of this article did not include a part of President Hashim Thaci’s translated Facebook post. The part “a train with slogans in opposition to the Kosovo Constitution and laws is completely unacceptable,” was added in the revised version.