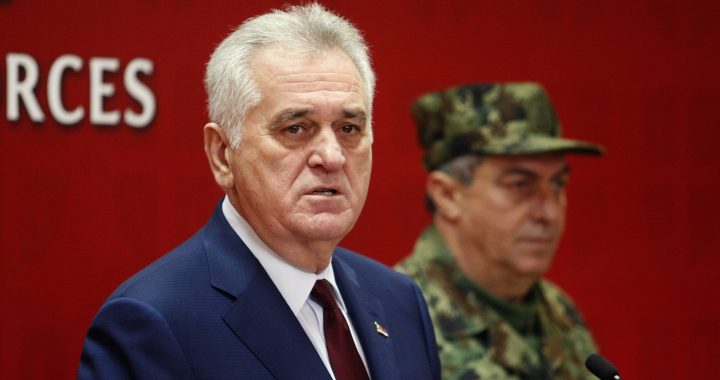 Serbian president warns of intervention ‘if Serb lives are endangered’

Serbia must protect its territory and people, said President Nikolic after a National Security Council meeting about the rising tensions over Belgrade-Mitrovica train.

After an extraordinary meeting of the National Security Council, Serbian President Tomislav Nikolic said that as the Supreme Commander of the Serbian Armed Forces he is prepared to send troops to Kosovo if the lives of Serbs in Kosovo were in danger.

The extraordinary meeting was gathered to discuss rising tensions between Kosovo and Serbia after a new train connecting Belgrade with North Mitrovica was halted before entering Kosovo on Saturday.

The train, covered in slogans proclaiming “Kosovo is Serbia” in 21 languages, was stopped 10 km away from the Serbia-Kosovo border amid opposition by Kosovo government, which claimed the train was illegal and violated the Kosovo Constitution.

A train connecting Serb-run part of Mitrovica with Serbia has been running since 2013. However, this would be the first direct line to Belgrade since the Kosovo war in 1999.

On Saturday, Prime Minister Vucic declared that the train was stopped due to security issues and accused Kosovo Police units of planting explosives on the track.

Kosovo Police’s denied the allegations and said they acted according to the Kosovo Constitution and relevant laws. Kosovo Operational Regional Support Unit, ROSU, a special police unit trained to act on the front lines during riots, were deployed at the Jarinje border separating northern Kosovo from Serbia.

On Sunday, President Nikolic claimed that the appearance of the special units was a sign that “Albanians want war.”

“We will never start or provoke conflict, but we are a state that must protect its people and its territory,” said Nikolic.

When asked whether he would send troops to Kosovo, Nikolic responded: “If they kill Serbs, we will all go there, not only the army. I would be the first to go, it wouldn’t be my first time.”

At the commemoration of the 18th anniversary of the Recak Massacre, during which 45 Albanian civilians were killed by Serbian troops, PM Mustafa commented on Saturday’s events for the media present.

“[The action] was carried out in accordance with rights and responsibilities of Kosovo’s institutions, and the institutions will always carry out such actions to protect the sovereignty of the country and to not allow such vehicles that provoke and have messages of conquest… to enter Kosovo,” said Mustafa. He added that the recently constructed barrier across the Ibar river in the northern part of Mitrovica will also soon be brought down.

Analyst Lumir Abdixhiku said the train to-do must be viewed in the context of recent worsening of relations between Serbia and Kosovo.

“The train provocation is a part of consecutive and increasing attempt of the Serbian government to destabilize the north of Kosovo by all means in times of an international political vacuum. It comes after a wall was built at the Mitrovica bridge, as well as international prosecution of Kosovo citizens with mandates from Milosevic regime reactualized.
“It is sad that Serbia decides to put at risk all ethnic balances in the region,” Abdixhiku said.