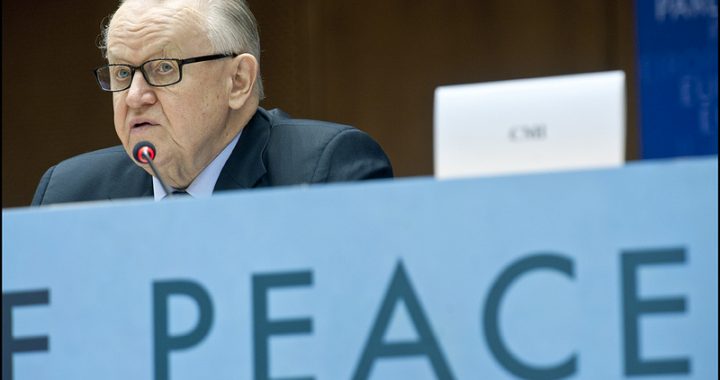 Two sides of the historical mistake

The recent stand-off between Kosovo and Serbia over the train can be traced back to the historical mistake both parties made when they accepted and rejected, respectively, the Ahtisaari Plan.

Two years of negotiations in Vienna (2006-2007) between Kosovo Albanians and Serbia, mediated by Finnish diplomat Martti Ahtisaari, produced the so-called Ahtisaari Plan on Kosovo’s final status. Ahtisaari’s Plan can be summarized more or less as the median wish of both sides’ total wishes put forth during the negotiations framework in the very beginning. I guess Albanians went with nothing less than (any kind) of independence, and Serbs went with any kind of non-independence. As a mediator in such negotiations, Ahtisaari did not take on either sides’ wishes for (non)-independence, but made the most out of the parties’ “any kind” part.

Leaning more towards any kind of independence than towards any kind of non-independence, it was obvious that to go through as such and be accepted by Serbia, the latter had to be satisfied, really satisfied by the plan. Ahtisaari in the end came up with his supervised (any kind of) independence Plan for Kosovo, with major concessions towards Serbia and Kosovo Serbs with generous power-sharing structures for non-Albanian minorities. With all its weaknesses, and without wanting to rehabilitate a Plan that I never agreed with myself, whatever kind of  independent state Ahtisaari proposed to create, it envisaged recognition by Serbia – the state Kosovo was supposed to secede from. For Ahtisaari knew that as fragile and thin as the state he was proposing to create may be, if it were recognized as such and could become a member of the international community with full rights, that weak state might as well survive – somehow.

Regardless of the major concessions made in favor of Serbia and Kosovo Serbs, trapped in the word “independence” used by Ahtisaari, for obvious semantical reasons, Serbia and the Kosovo Serbs rejected the Plan. (It is true that the Serb leadership south of Ibar river silently accepted the plan, not because they agreed with it, but because they did not have the choice their northern kin had in maintaining the direct border with contiguous territory with Serbia.) With this, Serbia went back to its pre-Vienna negotiations ‘any kind of non-independence’ position, while the Kosovo Serbs, especially in the north, failed to integrate and remained ghettoized outside the new state’s radar for the most part.

Trapped in the same word, the Kosovo Albanians made a mistake accepting the plan, and went on to declare its independence based on the very plan which was proposing a thin state strongly linked to Serbia to induce Serbia’s recognition, which never materialized. To be sure, it was not a mistake to declare independence, since normatively speaking it should have been declared on June 10th 1999 while maintaining and building the capabilities to defend it. The problem with the February 2008 independence in accordance with the Ahtisaari Plan rejected by Serbia is that the negotiations then continued under a different name – the EU-facilitated negotiations between the two parties. If one moves beyond the EU’s terminological niceties, it is in fact a continuation of the central question of the Vienna negotiations – how Kosovo should be arranged – which was supposed to be settled by Ahtisaari with the generous provisions made for Kosovo’s minority communities. That is what’s fundamentally the topic of the negotiations on the Association/Community of Serb-majority municipalities.

It is not a mistake to negotiate per se, but while Serbia sat in the new EU-facilitated negotiations with its old any kind of non-independence position, Kosovo sat in these negotiations with a new position where the already concessionary Ahtisaari Plan (embedded in its Constitution) was its starting position. It was clear that the outcome of these negotiations would go beyond the plan, which was creating a thin state to begin with. What kind of state could there be beyond a fragile thin state the Ahtisaari Plan already had proposed in the beginning? Only those who decided to declare the independence based on the Ahtisaari Plan minus Serbia’s recognition, and those negotiating now with the plan as their starting point would, perhaps, know.

Nonetheless, the negotiations are bearing the fruits that one may or may not want to see. When the UN praised the EU in September 2010 for its readiness to facilitate the dialogue between Kosovo and Serbia, it had a reason to be excited. It noted that the dialogue would in itself “be a factor for peace, security and stability in the region, and that dialogue would be to promote cooperation, achieve progress on the path to the European Union and improve the lives of the people.”

Surely, as the sixth anniversary of this negotiation process is around the corner,  the records for Kosovo and its citizens are dim. To begin with some recent events, Kosovo’s citizens must have not been happy on January 15 to hear the Serbian President threatening an invasion on the very day of the 18th anniversary of the Reçak massacre, in which dozens of civilians were tortured to death by Serb forces. Furthermore, the infamous barricades sitting on the Mitrovica bridge were cleared off in the end, only to face a new and a more permanently shaped Berlin-style wall built out of one side’s ambiguous reference to an alleged agreement reached in Brussels.

Also, the recent ability of Serbia’s Prime Minister to change cabinet members of the Kosovo Government publicly and explicitly–something inconceivable for anybody in Kosovo and Serbia since as far back as 1968–also shows the further blurring of the new state’s independence and statehood. When Ahtisaari proposed the two-thirds double majority decision in Kosovo’s parliament granting Serbs the right to veto changes to any letter of the Constitution, he probably never thought that rights for Serbs would turn out to be the rights of Serbia in Kosovo, when the latter implanted its Srpska Lista members in the Kosovo Parliament as a direct result of Brussels negotiations. The recent detention of Ramush Haradinaj in France on a Serbian warrant shows that Kosovo’s citizens are not independent from Serbia’s arbitrary (re)activation of its warrants through Interpol to kidnap any of Kosovo’s citizens.

Sure, the dialogue, one can argue, has had some positive outcomes – such as actors getting to know each other and perhaps decreasing the information asymmetrically so parties don’t feel constantly threatened. But one cannot count even on this last point anymore, if one looks at the recent chest-beating attitude Serbia has taken with the new Trump administration coming to power with his Russian friends.

Those few (including myself) who went on to critique Kosovo’s immersion in the negotiations without a single condition, understanding what such unconditional immersion would entail for the new state and its citizens (regardless of ethnicity), were campaigned against by many both inside the country and out as “anti-European”, “anti-American”, and “anti-Western” – a tactic used mainly in the most oppressive and authoritarian regimes to lynch diversity in opinions.

The tragedy of the new state is that reversing its position in the negotiations, let alone pushing to put them on hold, has become more difficult than declaring an independent state. Nobody in Kosovo’s political elite, at least those clinging to power since the negotiations started back in March 2011, could ever conceive of a policy whereby Kosovo changes its course in the negotiations. Negotiating with Serbia has become part of their raison d’état. It is an interesting dialectic. They cannot survive politically without negotiating with Serbia, and Serbia cannot bully Kosovo without them. Negotiating with Serbia has even become a flirting instrument between Kosovo’s political elite and their international friends. Note how when Serbia threatens with invasion, Kosovo’s President issues a press release reminding Kosovo’s citizens that “Serbia’s aims currently are the same as those of the Milošević’s regime,” but immediately says that  “the dialogue with the Serbian Government [akin to Milošević’s regime, according to him], must continue.”

When faced with this, it is easy for critics to ask the usual “so what do you suggest to do now?”, which in itself entails an agreement with the problem while being comfortable with it. We first need to genuinely agree at least in some part with the core attributes of the problem, which can be traced to different pathways the state and its society took long ago. But simply saying it is difficult (or impossible) to change course is not only a weak argument, but a blatant rejection of an unlikely-seeming, but very possible course one can take. Given that the declaration of independence in accordance with the Serbia-rejected Ahtisaari Plan was (or at least will be) a historical mistake for both Kosovo Albanians and Kosovo Serbs, the former for accepting it, and the latter for rejecting it, we need to start a society-wide debate on changing the core principles of the Constitution based on which the state has been poorly founded.